What exactly is this VLA radio image of Jupiter showing?

This VLA image is beautiful, and instructive, but I don't understand it fully. 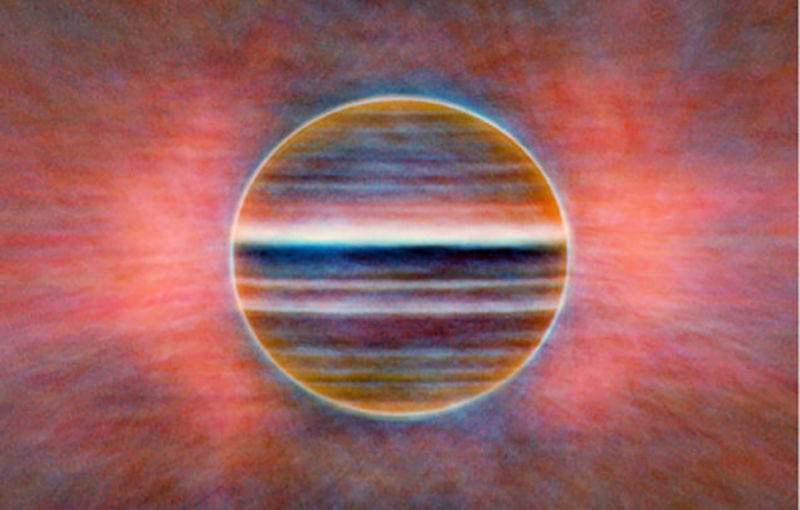 This version is from an article in Gizmodo where the credit reads: A radio image of Jupiter captured by the Very Large Array. Image: Imke de Pater, Michael H. Wong, Robert J. Sault and which cites the recent article in Science: Peering through Jupiter’s clouds with radio spectral imaging. However, that paper does not actually show this image.

Another version of the image can be found in Berkeley News: New radio map of Jupiter reveals what’s beneath colorful clouds and gives more information how the image was produced. 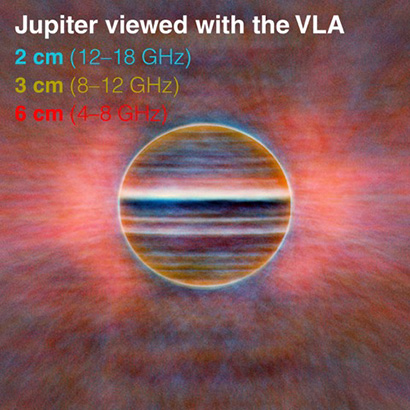 A radio image of Jupiter from the VLA at three wavelengths: 2 cm in blue, 3 cm in gold, and 6 cm in red. A uniform disk has been subtracted to better show the fine banded structure on the planet. The pink glow surrounding the planet is synchrotron radiation produced by spiraling electrons trapped in Jupiter’s magnetic field. Banded details on the planet’s disk probe depths of 30-90 km below the clouds. This image is averaged from 10 hours of VLA data, so the fine details seen in the other maps are smeared here by the planet’s rotation. Image by Imke de Pater, Michael H. Wong (UC Berkeley), Robert J. Sault (Univ. Melbourne).

I would like to know more about how the image was processed. What does it look like before the uniform disk is subtracted - is the radio emission from the region around the planet actually as strong as the planet disk itself, as this image suggests? If there is a reference for this image I'd also like to read it!

In the mean time, it really is beautiful!

The image is sometimes paired with the following image, taken here from Science News.

Since this image resolves lateral detail, I'm guessing it might be the same 10 hours of data, but processed with a moving frame and corrected for distortion as it wraps around during the rotation of the planet, while the global image above is smeared by rotation

Was it? Where can I read more about this?

A uniform disk has been subtracted to better show the fine banded structure on the planet.

This means the surface of the planet is far brighter (in the raw data) than the surrounding magnetosphere. The planet itself has been darkened considerably in the image, otherwise it would be a pale circle and show little or no detail.

The press release from the VLA's site itself doesn't even show the wide field image however; it concentrates on the image showing detail of the spot itself. It mentions:

There is an earlier 2006 paper by some of the same researchers showing earlier attempts, with a much more coarse radio map of Jupiter. This goes into more detail about the earlier image processing techniques though (requires good knowledge of Fourier analysis etc.)

(Note: I can't read the current Science paper in full, it's behind a paywall.)

Not the answer you're looking for? Browse other questions tagged jupiter radio-astronomy data-analysis magnetic-field or ask your own question.

15
What Causes the Large Radiation Fields Around Jupiter?
1
What is this graph showing?
4
Why is this video showing radio waves transmitted from a radio telescope?
1
Which 16 antenna locations were used this MeerKAT radio image?
1
Are there more images with different filters available for the April 6 Hubble image of Jupiter?
16
What is the "lost light" in this unusual Hubble Deep Sky image?
2
Is the delay to correlate the signal from one dish to another on a VLA radio telescope longer for red shifted objects?
3
What is z in this program?