“Extinct Species” of meteorite - how quantitative is the statistical analysis?

This recent paper in Nature A new type of solar-system material recovered from Ordovician marine limestone is available to read on line, and Figure 3 is already widely publicized. 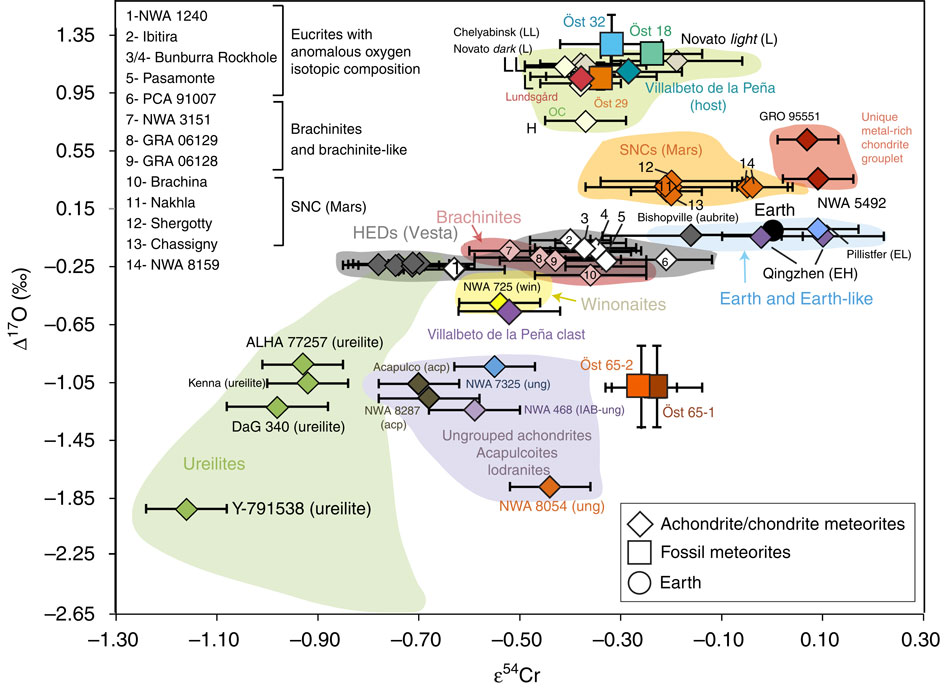 The paper is long and careful, and in any scientific field of classification, there is a huge amount of work and thought and discussion that is sometimes difficult for those outside to understand without the necessary background.

The last two sentences of the abstract read:

"...This may be the first documented example of an ‘extinct’ meteorite, that is, a meteorite type that does not fall on Earth today because its parent body has been consumed by collisions. The meteorites found on Earth today apparently do not give a full representation of the kind of bodies in the asteroid belt ~500 Myr ago."

In this part of the image, without knowing a lot about meteorite taxonomy but a little bit about error bars, the image alone doesn't convince me of much at all by itself. There are good mathematical techniques to try to find clustering in data, and probably some methodologies to apply to calculate the probability that the clustering is likely to arise by random chance or is likely to be "real" (which is just another way to say - albeit loosely - not likely to arise by random chance).

I'm guessing those colorized islands probably come from statistical analysis of a very large number of meteorites, but I don't know that for sure.

Are these color islands generally accepted and their shapes published independently somewhere? Is there a plot where I can see all of the points that were used to identify these clustering? How exactly were these contours drawn?

Finally, is there a statistical analysis using these error bars and contours that express the probability that the extinct meteorite specimen described in the paper is part of the distribution or not? Of course a number by itself is weak because of the softness of the assumptions, but is there one and if so how was it calculated?

Browse other questions tagged data-analysis meteorite or ask your own question.

4
tiny diamonds in meteorite “signature of a long-lost planet”: why come to Earth in 2008?
1
Are the “extinct species” of meteorites originally from the “Barbarian” asteroids?

6
Unbelievably high masses/ densities in NASA website data
0
Correlation of planet sizes with star sizes?
5
What are the prerequisites for a meteorite to reach the ground?
1
Data Analysis: Image Sharpening through Posterisation
1
Are the “extinct species” of meteorites originally from the “Barbarian” asteroids?
2
Practicing image processing and analysis
4
tiny diamonds in meteorite “signature of a long-lost planet”: why come to Earth in 2008?
5
Generating random galaxy catalogs for correlation functions
8
How do I get started in astronomy data analysis?