What is the shape (along the plane, not up-down) of stellar orbits in flat spiral galaxies

What I mean is, with a central mass orbits are relatively simple, but orbits around the galaxy are different, in essence as the star orbits through the dark matter halo, the further it moves away from the center of the galaxy the greater the gravitational field, so while orbits tend to slow down as kinetic energy is turned into potential energy, stars are effectively orbiting around more mass the further they are from the center of the galaxy, which might speed them up. The equal areas over equal time rule would seem to no longer apply.

So, ignoring up and down motion relative to the plane of the galaxy, is there a common shape for galactic orbits? Is there a formula? I think eccentricity would still apply, but I don't think the orbits would be ellipses, so it would be a different kind of eccentricity. Would these orbits tend to circularize (in an ideal dark matter cloud, ignoring perturbations. Obviously perturbations would lead to, in a practical sense, unpredictable orbits, not neat and tidy formulas. I gather from a show I caught on the science channel that the Milky Way's magnetic field also plays a role in forming its spiral arms, but I'm asking in an ideal, mathematical sense, what shape would orbits be through a galaxy, from a 2D point of view, ignoring up and down motion.

It occurred to me that the question might be more simply asked by a black hole in effect "orbiting" through a planet or even a low-velocity neutrino (if there are any low-velocity neutrinos). The inside a planet orbit is quite different than the Kepler orbit, because gravity increases as the object moves further away from the center. The overall orbit might still be somewhat like an ellipse but the laws for such an orbit would be different, you would see the highest acceleration at the furthest points from the center though you'd probably still see the highest velocity at the closest point to the center.

Anyway, I'm mostly just curious if those shape has been worked out and what it looks like.

This is an interesting question and so often interesting questions cannot easily be answered with any current knowledge, but this one can be answered to some degree. I'm going to run through the basics of orbital theory and describe how they can apply to galaxies and how it differs from Keplerian systems. You should have a reasonable understanding of Newtonian physics (after all orbits derive precisely from Newton's laws) and a strong knowledge of math. If you don't have these things, just jump to the end of each section where I'll try to summarize the important points behind the math.

A quick note on math notation I'll be using. A dot over a symbol indicates a time derivative (e.g., $\dot{a}$) and un-italicised, bold symbols are vector quantities (e.g., $\bf F$). Let's get down to business.

The Orbital Equation of Motion

Consider a mass $m$ as some position $\bf r$ and moving with a motion described by $\bf \dot{r}$. This mass experiences a force $\textbf{F}(r)$ which is only a function of radial distance, $r$, from the center of the coordinate system. The goal here is to determine the equation of motion that can describe the orbit of the mass due to this force. This equation can then be used to solve for $r(\theta)$. By Newton's law the equation of motion can be initially defined to be

Note that in this case $r$ is simply the radial component of $\bf r$ and $\theta$ is the azimuthal angle of the body in a spherical coordinate system. I'll leave it to you to determine how to break down the acceleration into the two components above, under the appropriate coordinate system. Let's try to remove our $\theta$ dependence so that we have only a function of $r$. This can be achieved by using angular momentum conservation. The angular momentum per unit mass is given by $\ell = r^2\dot{\theta}$ so that $\dot{\theta} = \ell/r^2$. This gives

This is now a differential equation that allows us to solve for $r(t)$, but we want $r(\theta)$ so we need to do some conversion. Let's re-parameterize by defining $u \equiv 1/r$ (the reason will become clear in a bit) and determining $\ddot{r}$ in terms of $u$ and $\theta$.

Writing in a more convenient form we finally arrive at

Remember that, $m$ is the mass of the body, $u(\theta) \equiv 1/r(\theta)$, $\ell$ is the angular momentum per unit mass, $\bf F$ is a purely radial force acting on the body, and $r$ and $\theta$ are the radial and azimuthal coordinate positions of the mass.

Punchline: The final result here is a general equation of motion for a body orbiting according to some arbitrary force. This could be gravity, electromagnetic, a spring force, or anything else we decide. It is purposefully derived under general and nonconstrictive assumptions and hopefully you can see that it can be used to understand the orbital motion of a star orbiting in a disk galaxy. The goal with this equation should be to plug in your force (whatever that may be) and solve for $u(\theta)$. From there it's easy to determine $r(\theta)$.

Before we go about looking at orbital motion in a galaxy, let's look at standard Keplerian motion so we have something to compare to. Keplerian motion derives from assuming our mass $m$ is orbiting a single, point-like mass $M$ and under the influence of simple gravity. In that case, we can write our force as $F(r) = kr^{-2}$ and thus $F(1/u) = ku^2$, where $k\equiv GMm$ is a constant, defined here for mathematical simplicity. Note that $G$ is the gravitational constant. The general orbital equation, under this force, now becomes

This is a standard second-order, nonhomogeneous differential equation with a constant forcing function. If you know your Diff EQ, you should know the solution almost immediately.

In this equation, $A$ is some unknown constant, and $\theta_0$ represents the starting angle of the orbit, which we can arbitrarily choose to be zero. Our ultimate goal is to get $r(\theta)$ so let's do that. I'm going to do a few steps in one though and leave you to work out the intervening math. I'll fill in for $k = GMm$ and define the angular momentum as $L = \ell\mu$ where $\mu$ is the reduced mass of our system. I will also state, without proof, that $e = A(m\ell^2/k)$ where $e$ is the eccentricity of the orbit.

Punchline: We've found a final equation which represents the orbital motion of a mass under the influence of a gravity due to a point-like mass $M$. If you know your stuff, you'll see that this equation precisely describes the conic sections, depending on the value of $e$. If $e = 0$, you get circular motion (since $r(\theta)$ becomes a constant). If $0 < e <1$, you get elliptical motion, $e=1$ is parabolic motion and $e > 1$ is hyperbolic.

As expected, Keplerian motion (i.e., having a central force such that $F\propto r^{-2}$) resulted in conics, which is precisely Kepler's first law. Kepler's second and third laws more or less derive from the same assumptions. It stands to reason then, that any system where $F \not \propto r^{-2}$ does not follow any of Kepler's laws. The orbits are not perfect conics (e.g., ellipses, circles, etc.), they do not sweep out equal areas in equal times, and the standard $P^2 \propto a^3$ certainly does not apply.

Orbital Motion in a Galaxy

Your question correctly describes the situation for stars (or anything really) orbiting in a galaxy. Stars are not orbiting central, point-like masses. They are embedded within both the baryonic and dark matter that comprises the galaxy and are orbiting through it. It is a well known concept in physics that spherically symmetric mass distributions do not have a net gravitational pull on objects interior to that distribution, which means that for stars in a galaxy, the mass affecting its orbit is the mass interior to its radius. If that radius changes, the mass changes!

The central force on our star is still going to be gravity, but the mass acting on it will be all the mass interior to some radius, denoted by $M_r$. We can see that $F(r) = GM_r(r)m/r^2$. If we want to determine the force acting on our star (and thus the exact orbit, via the differential equation above), we first need to figure out what the mass interior to some radius is. This can be achieved by using the mass continuity equation.

You can essentially figure out all the mass interior to $r$ by integrating up all the mass density as a function of $r$. Here of course, you need a good equation for $\rho(r)$. A simple, but physically unrealistic density profile is the Singular Isothermal Sphere (SIS), whereas a more realistic, but mathematically complex equation might be the NFW profile or the Einasto profile.

I've now laid out all the steps you need to figure out the orbital motion in a galaxy, but I have to say, it's not pretty. We can look at part of the simplest case though, that of the SIS.

For the singlar isothermal sphere, you have that $\rho(r) = v^2/(4\pi Gr^2)$, where $v$ is the rotational velocity of your star. This profile relies on a crucial fact of disk galaxies $-$ their rotational profile is flat! This was well established, for example by Ruben et al. 1978. I've reproduced a figure from this paper below which shows the rotation curve for several galaxies. The important point here is that this shows $v$ is constant and does not depend on radius! (Assuming we're not near the galactic bulge or center. That's a whole different beast.) 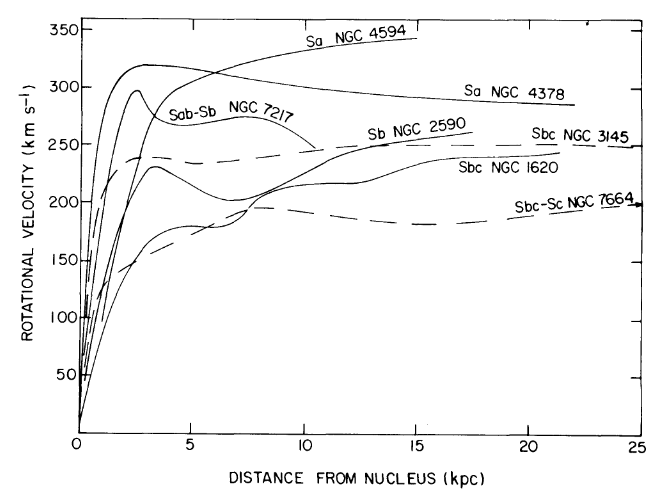 With this crucial piece of information, we can solve for $M_r$ by integrating $\rho(r)$ (which I'll leave up to you). The result is that

This means your force is given by

You can see here that unlike the Keplerian case, our force is proportional to $r^{-1}$ rather than $r^{-2}$. You can do this process with other density profiles (such as the NFW or Einasto I listed above), but you'll wind up with the same result.

If you're so inclined, you could choose to plug this into the orbital equation of motion above and solve it out, but you're now working with a non-linear differential equation and things can get messy fast.

Punchline: I'm not sure if this actually answers your question or not. I've led you partially down the rabbit hole, but hopefully you can appreciate how complex it quickly gets. All the above work was using broad assumptions and simplifications. I suppose the short answer to all of this is that stars orbit galaxies in a complex, yet closed orbit which is not easily described precisely (even for our own galaxy) via calculable equations. We can approximate and do our best to work through the math, but in the end its an approximation. In the crudest approximations though, you may as well consider an orbit such as our star to be circular and be done with it.

Not the answer you're looking for? Browse other questions tagged orbit milky-way orbital-mechanics or ask your own question.

6
Do Stars in Galaxies also move in elliptical orbits?
2
A rough analytical expression for the Milky Way's radial mass distribution?

3
How do kepler orbits account for planetary migration?
5
Orbiting supermassive black hole or galactic center of mass?
3
Leonid meteor showers and the Tempel-Tuttle comet
4
What effect does time dilation have on bodies orbiting close to Black Holes?
3
Can one approximate the semi-major axis of an orbit as the average orbital distance for eccentric orbits?
3
How to calculate the argument of perihelion for exoplanets with incomplete orbital elements?
4
Would two Earth-like planets on opposite sides of a Sol-like star at about 1 AU be a stable configuration?
11
Is Earth's Surface “In orbit”?