Would space-based telescopes need to remain in the shadow of Earth to avoid light interference from the sun?

So I am thinking about orbiting telescopes tonight and I was thinking that it would probably be beneficial to keep them in the shadow of the Earth or some other space body to avoid light interference.

Specifically, I am thinking about looking off in all directions around Earth. I would imagine staying in a shadow would help the most. But that at the very least there would be a range of degrees around the direction of the sun that you could not observe until the Earth changed orbital position so that the Sun's light was no longer interfering when looking in a specific astronomical direction.

Am I correct in any of these assumptions? I believe there are telescopes that don't sit in the shadow of a body, but I do think that would greatly limit the range of area it could look at during a given timeframe.

Its a nice idea, but it wouldn't work.

To stay in the Earth's shadow a telescope would need to orbit the Earth in the same time the earth orbited the Sun so that it always stayed on the opposite side. For its orbit to be this long it would need to be a long way out, remember geosynchronous orbit (one orbit in 23h 56min 4sec) is at a distance of 42,164 km. For a 1 year orbit the telescope would be so far away that its would not be in orbit around the Earth but the Sun, as it would have a much larger gravitational influence. It would also be too far away to be in the Earth's shadow cone.

The mindboggling GAIA spacecraft-telscope sort of does what you suggest! That's kind of the closest concept to what you describe.

Just as explained in JamesS answer, if you were that far away you wouldn't be in orbit around the Earth. But, GAIA's L2-like orbit is kind of the closest thing to what you say. 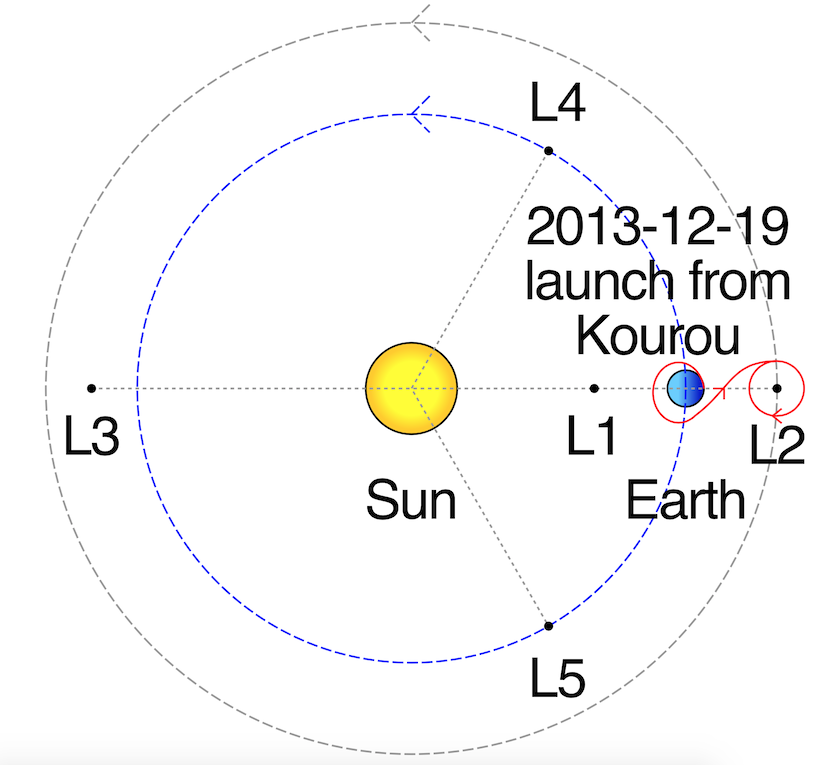 Note that just as you say, light interference is a huge problem for instruments this insanely sensitive.

GAIA has a problem where, apparently some tiny little bits of the sun-shade (like small hairs) were poking around, and that is enough to cause stray light; also some ice particles seem to be causing stray light. http://blogs.esa.int/gaia/2014/04/24/commissioning-update/

As Joe Blow explains, there is an orbit, at the L2 point, 1.5 million km directly further away from the Sun/Earth, where a satellite could remain permanently in the Earth's shadow, though it would not be completely shadowed - the Sun would still appear as a narrow ring around the blocking Earth

This would be a great advantage in terms of cooling the spacecraft and in terms of avoiding scattered light entering the instrument. It would allow a greater fraction of the sky to be observed at any one time, though there would still be a zone of avoidance close to the Earth/Sun.

However, all the satellites (WMAP, Planck, Herschel, Gaia) that have exploited L2 have been specifically placed in "Lissajous orbits" that orbit around the L2 point and are never in the Earth's shadow. The reason is that you need the sunlight for power.

Neverthless, L2 still offers a very stable thermal environment and it is still the case that a much larger proportion of the sky is viewable than from a lower Earth orbit.

Light pollution isn't as much of a problem in space as it is on Earth because you're in a vacuum. Imagine making a small black disk and holding it up at arms-length to cover the Sun....it's not going to simulate the effects of an eclipse, you're not going to get to see the corona and background stars because the rest of the sky is still flooded with light - or, more accurately, the Earth's atmosphere is flooded with light as it scatters off water vapour, dust and the like.

On the other hand, you can cover the Sun up in space and see the corona etc in exactly that way, the STEREO solar observatories do it. As long as you're careful about blocking direct sunlight from hitting your lens, and make sure there's no reflective bits of spaceship in the frame, you're not going to get light pollution in the same way you would on Earth.

Not the answer you're looking for? Browse other questions tagged orbit telescope photography space-telescope or ask your own question.

4
Is the ratio between earth's distance from the sun and the speed of light just a coincidence?
0
What is the shape of the Sun's orbit around the Earth taking into account elliptical orbits?
1
Could the Earth be used to cast an arago/poisson spot on something
4
Does the focus of terrestial telecopes need adjustment for the distance of astronomical objects?
5
Why do photos of Earth always have a black background?
6
Angular diameter of the Sun's reflection from the ocean, seen from Sun-Earth L1?
8
What is the gravitational lensing focal distance of a white dwarf star?
2
Do large telescopes, especially plans for the LSST, avoid saturation artifacts from the brightest stars and planets? If so, how?
1
When thermal infrared space telescopes spot asteroids, are they seeing the body's own thermal emission, or reflected TIR from the Sun?