Is this picture of a digital camera being oversaturated by bright light source i.e. the Sun? [closed]

Is this picture of a digital camera being oversaturated by bright light source i.e. the Sun? 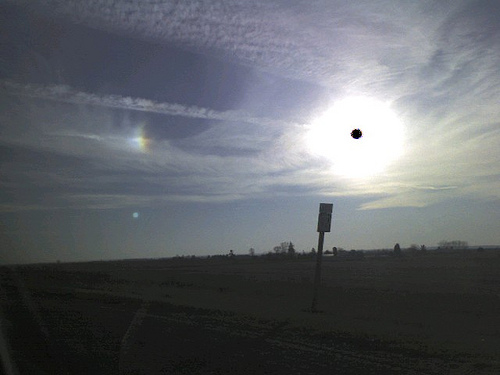 It's an artifact from the digital sensor and/or the image processing in some cameras.

There have been a number of digital cameras with this issue. E.g. here is a Sony camera where the sun turned black with a specific setting for the picture profile. (In the example video, it's the S-log picture profile at 0:49.)

Sony called it a bug, and released a fix for it.

This artifact only affects a relatively small number of cameras, and it makes sense to think of it as a bug in the camera image processing: Yes, the sensor is oversaturated, but oversaturation is better represented as all white rather than all black.

If you have an affected camera, it's not just the sun that turns black, it's all oversaturated highlights, like this example with car headlights.

That does seems like the most probable explanation. Pointing a camera directly towards the Sun is not exactly healthy for it

You may want to try to take some other pictures and study them to see it some permanent damage is present. (That is, if this is your camera anyway.)

At a close up look the artefact can look somewhat like some common painting or spray tool in common editing software, but it is hard to tell if it is fake. I could not find any meta-data like "created with GIMP". It says though that the image is almost 8 years old.

It could be an optical artefact, as it appears like the image is taken through a window. (Please give some more information on this if you have it.) Any astronomical phenomenon seems highly unlikely.

1
Brown Dwarf transcending past the sun with the naked eye

16
How do I build a stargazing aficionado's Sun funnel to observe our nearest star safely?
3
Can the Sun be used as a point source of light to achive better focus?
6
How does the appearance of the analemma vary with latitude
21
How bright would the sun appear from the hypothetical Planet Nine proposed by Caltech?
16
Can this picture of the moon directly above the sun from the horizon be real?
5
Why shouldn't you look at the Sun through a camera using eclipse glasses?
1
A real light source, or an artifact?
4
Would one have to be more than halfway to the Oort Cloud for the Sun to appear as bright as the full moon?
4
How bright is the Sun in S-band?