Future redshifting and effect on the 'pitch' of CMB radiation

After discovering this question exploring the sound of a blackbody, I started wondering about the sound of the Cosmic Microwave Background radiation from the Big Bang, specifically what the current pitch might be at its peak frequency and how that might evolve over time due to redshifting. Here's what I've been able to deduce so far:

Building on this result:

I've tried to apply some of the information in this question and elsewhere, but would greatly appreciate hearing from someone with more expertise in the subject area if this unorthodox comparison has piqued your interest like it has mine.

The wavelength of the CMB increases linearly with the scale factor $a$, which is defined as 1 today, so the "sound" of the CMB has dropped an octave when the Universe has doubled in size (in all three directions), i.e. when $a = 2$, which will happen when it is roughly 25 billion years old (see e.g. Fig 1 of Davis & Lineweaver 2004).

The figure shows how the peak frequency evolved in the past. Its current value is 160.4 Ghz. To calculate how a human would perceive the sound at a given time, I suppose you'll have to multiply the spectrum with the frequency-dependent transmission function of the human ear, but that's physiology which I know nothing about. 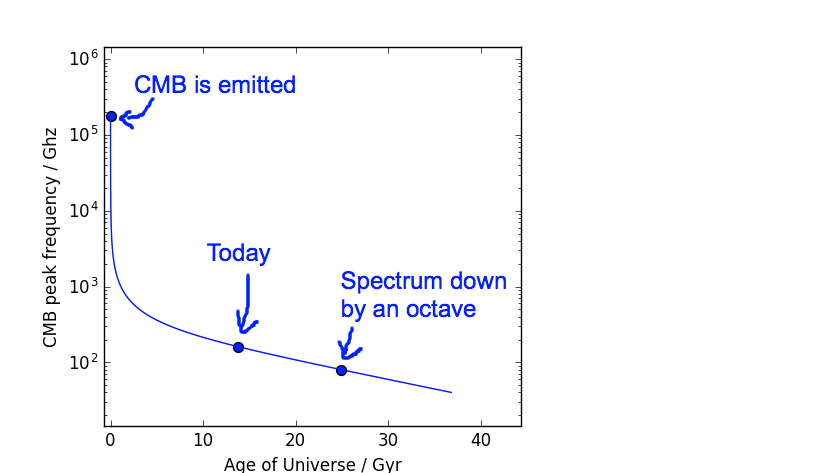 Not the answer you're looking for? Browse other questions tagged cosmology big-bang-theory redshift cosmic-microwave-background black-body .

9
Does the cosmic microwave background change over time?
1
Is the CMB the photons that were created at the birth of the atom?

25
Future of CMB observations: How will our knowledge of the early universe change?
4
Do the E and B modes of the CMB polarization have anything to do with electric and magnetic fields?
2
What is CMB radiation doing to the universe?
5
Was the cosmic microwave background (CMB) radiation originally gamma rays?
0
How is it possible that the CMB approaches the earth from all directions?
14
How long after the Big Bang would CMB radiation have been between 273 and 373 K?
9
Why isn't the CMB blurred by the blackbodies emitted in the time after atoms first formed?
2
Does the Cosmic microwave background (CMB) have an amplitude? Does it vary, like the 'temperature' (wavel./freq.) and the polarization?
11
How did astronomers get rid of microwave radiation from stars and galaxies in picures of the CMB?