I guess my question is whether I have understood the second law correctly? That the area of a triangle was being calculated in an elliptical orbit, no matter how elliptical the orbit is.

That is not correct.

The area is the total area between the two radius lines, so there is a curved side.

Imagine you have two points almost 180 degrees from each other. Using just a triangle, the area is close to zero. Now, two points placed closely together can have the same area in between them. Then you have an equal are, but not equal time, so your hypothesis can not be correct.

Hohmannfan's answer is correct, but as I understand your question, you do understand the general idea correctly and the answer to your question is yes, no matter how eccentric the orbit, the planet spans equal areas over equal time, at least nearly perfectly. (more on that later)

You're mistake is in calling the sectors "triangles". They're sectors of an ellipse from a focal point, not from the center. I'm not sure what the mathematical term is for those shapes, but calling them triangles, while convenient, is incorrect, calling them sectors of an ellipse is problematic too because a sector without clarification implies it's initiated from the center point, not a focal point. So, near as I could find, "Sector from a focal point of an ellipse" is correct, but long winded. "Kepler area" would probably do the trick. Wikipedia just puts up a picture and calls them "shaded areas" or "shaded sectors". 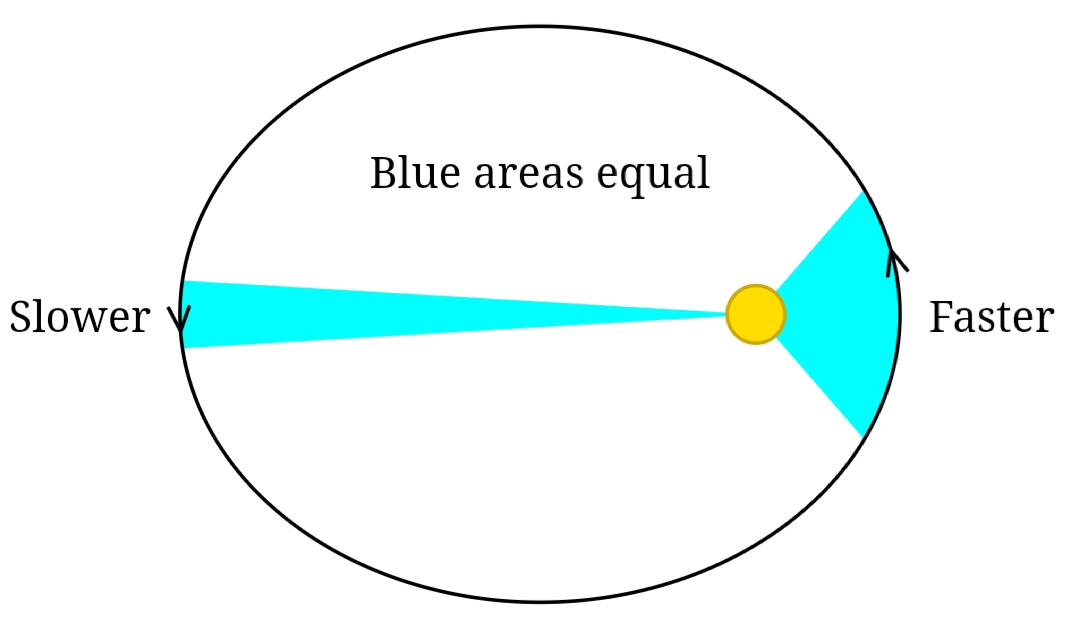 As for deviations from Kepler's law. Mercury is close enough to the sun that relativity caused an observed deviation from it's predicted elliptical orbit. Late 19th and early 20th century astronomers tried to explain that by adding a planet (Vulcan), but they couldn't find that theoretical planet. Einstein's laws later explained Mercury's observed deviation.

Also, planets pull on each other and that's been known at least since Newton's time, as he did a fair bit of work on it but never solved it to his satisfaction. Earth, for example, speeds up if Venus and Jupiter are ahead of it, and slows down when they are behind it. These are called orbital perturbations and are simple in principal, quite complicated mathematically. An unexplained deviation in Uranus' elliptical orbit lead to the discovery of the planet Neptune. That's not a flaw in Kepler's law. His law is so exact that when a deviation to an elliptical orbit is observed, we know there's another gravitational body out there and we even know about where to look.

Not the answer you're looking for? Browse other questions tagged planet kepler johannes-kepler .

6
Is there a web service providing orbital data of solar bodies (planets, comets, asteroids, dwarf planets)?
0
What is the shape of the Sun's orbit around the Earth taking into account elliptical orbits?
3
What is the distance of Earth from the 7 planets, moons and the Sun at a point of time?
2
Can we apply Kepler's law of planetary motion to the moons motion around the earth?
9
Is Jupiter a dwarf planet?
4
Can one approximate the semi-major axis of an orbit as the average orbital distance for eccentric orbits?
5
How to derive Kepler's 1st Law?
5
Kepler's Law, focal points - Heliocentric or Barycentric?
1
Which factor most affects the accuracy of Kepler's Third Law?