When did "resilvering" large telescope mirrors actually refer to aluminization, and why was it necessary?

This answer nicely summarizes the general picture of historical use of silver for mid to large size telescope mirrors, and the shift to aluminum once good quality vacuum pumps and chambers suitable for this process were available. A freshly evaporated, atomically clean aluminum surface will can sometimes violently react with oxygen, so this has to be done under high vacuum, and vented carefully with inert gas first.

When did the term "resilvering" generally start to actually refer to aluminum coating, and not silver? Was that actually the case by the 1960's or 1970's?

From what I remember, evaporated aluminum will form a protective oxide layer ("native oxide") of the order of 10A thick within seconds or minutes that is self limiting - no further oxygen can penetrate this layer.

If this is so, why was re-silvering actually necessary? The cost, risk, and downtime associated with removing the primary and other mirrors every few years sounds like something you wouldn't do unless absolutely necessary.

Amateur telescope and mirror maker here. Not sure if I qualify as a "citable source" but anyway, here it is:

All metals will eventually tarnish. It may take a long time, but it will happen. The process is not entirely chemical always. Sometimes it's purely mechanical (abrasion). Other times it's in between. Surface phenomena are complex.

Even gold-coated mirrors will tarnish. You could use gold for infrared observations. But no matter how much care you take of it, eventually you will have to re-coat it. Sure, gold lasts a pretty long time, but not even gold is forever.

Aluminum is covered with a natural layer of colorless sapphire (aluminum oxide), which protects the metal from further destruction - sapphire is very hard and very inert chemically. But oxygen still diffuses through sapphire (albeit extremely slowly), and so do other corrosion agents like sulphur oxides, marine salt, etc.

So, yes, replacing silver with aluminum was an improvement. But not even aluminum is forever. In practice, you will maybe double the lifetime of the reflective layer when you migrate from silver to aluminum.

It should be noted that silver is still used. Aluminum is most popular nowadays, but you'll still find silver-coated mirrors (its reflectivity is higher than aluminum), gold-coated (for infrared), etc.

There are further coating techniques, like layering silicon oxide on top of metal, which further improve the lifetime of any kind of metal.

It's been quite a while with no activity, so I'll post an answer based on my comment.

tl;dr: It started in the 1930's but even the Kepler space telescope still used silver!

Aluminizing mirrors was developed by John Strong, in the early 1930's. One can read about it in his book Procedures in Experimental Physics 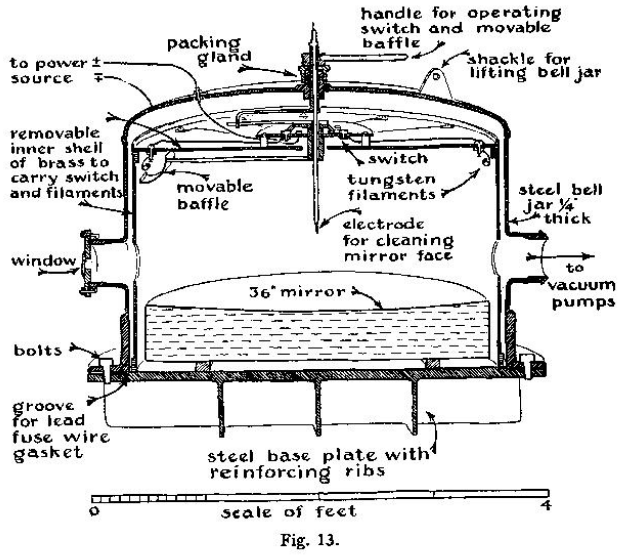 The 40-inch tank, Figure 13, shows the type of equipment used at the California Institude of Technology for larger mirrors. Still larger systems have been used26

26 http://articles.adsabs.harvard.edu/full/1936ApJ....83..401S The Evaporation Process and its Application to the Aluminizing of Large Telescope Mirrors also here

The aluminum film is automatically protected from tarnishing by an oxide film (presumably corundum, Al203, or bauxite, Al2O3*2H20) which starts to form as soon as the aluminum comes in contact with the air. This oxide becomes thicker with time for about sixty days, when it is very hard and tough, forming a surface not easily scratched when it is being dusted and cleaned.

The formation of the aluminum oxide film on an exposed metallic aluminum surface has been studied by Vernon,31 who weighed the sample to a precision of 1/100 mg and plotted the weight increment due to oxidation as a function of time. The period of time required for the oxide film to attain its natural thickness was seven to fourteen days. After this the thickness of the film remained nearly constant at 100 A.

This oxide layer is, of course, too thin to give interference effects. It could be much thicker, however, and still not give interference, because of its transparency and the high reflectivity of the under- lying aluminum.32

The article shows why shows an additional reason why aluminum was more attractive than silver for astronomers, even when aluminumization was a challenging and difficult process, spectral range! 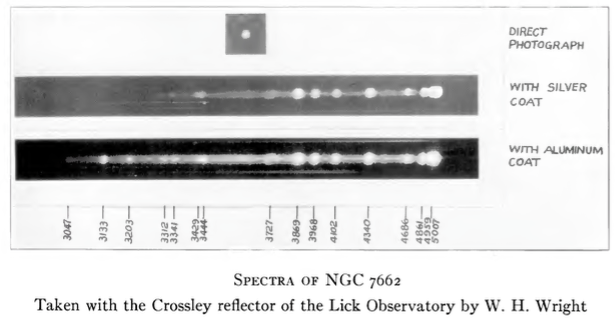 An aluminum vacuum-deposition process invented in 1930 by Caltech physicist and astronomer John Strong, led to most reflecting telescopes shifting to aluminum.9 Nevertheless, some modern telescopes use silver, such as the Kepler space observatory. The Kepler mirror's silver was deposited using ion assisted evaporation.

Why Clean? You might think the Hale mirror, nestled deep inside the telescope workings in the Observatory dome, would be relatively sheltered from dirt and soils. But telescope mirrors get a lot of use, and the Hale Telescope is no exception. According to Palomar Observatory’s W. Scott Kardel, the 200-inch Hale Telescope at the Observatory is used an average of 300 nights per year. Even with weekly cleanings, mirrors periodically need to be given a new coat of reflective aluminum.

“Soils that may accumulate on the mirror include oils from the machinery,” Kardel explains. “We have motors driving the telescope workings that are more than 60 years old. Some of them are suspended above the primary mirror, because we also use smaller mirrors that have to be moved in and out of position. Occasionally, one of the motors might leak. Oil may come from elsewhere, too.”

Other possible soils include occasional drops of rain or condensation, which leave water spots. “A water spot with a bit of dust or ash from a fire, for example, can actually form an acid eventually,” Kardel says. Obviously, that’s not acceptable on a surface that needs to be as optically perfect as possible.

To combat routine soil accumulations, observatory staff perform a weekly carbon dioxide dusting of the mirror surface. But even this will not remove water spots.

Eventually, the mirror surface degrades to a point where full refurbishment, including cleaning, stripping of the old vacuum metallized aluminum coating, and recoating becomes necessary. “On a historical basis, we’ve done the full stripping, cleaning and re-metallizing about every 18 months to two years,” says Bruce Baker, skilled trades senior at the Observatory. “Of course, some of that is contingent on scheduling of the telescope and how it’s being used.”

Aluminum quickly forms a native oxide when exposed to atmosphere. Aluminum is incredibly exothermically reactive with oxygen. The resulting thin Al2O3 or alumina film is only tens of angstroms thick but the reaction is self-limiting because the resulting layer can not be penetrated by any further oxygen once it gets this thick. It's a bit similar to the formation of native oxides on silicon for similar reasons.

Here is an example of what the "resilvering" of the Hale 200 inch mirror looks like. Between 01:00 and 01:30 you can see what an involved project simply washing the mirror can be. At this point it's probably a better idea to resurface than to try to do this without damaging an existing aluminum surface.

The paper Reflectivity Degradation Rates of Aluminum Coatings at the CFHT Publications of the Astronomical Society of the Pacific, v.109, p.303-306 shows that aluminum mirrors that are washed regularly are just fine without resurfacing.

The experimental data in the paper supports the basic science; native aluminum oxide forms quickly, stays very very thin (tens of angstroms) and becomes a permanent barrier to further reaction of the aluminum. Alumina is un-reactive as well; alumina ceramics are used in a wide variety of chemically reactive and corrosive situation because of their non-reactivity.

Resurfacing of aluminized mirrors is necessary from time to time when cleaning with soap and water would cause more damage than it would benefit because dirt is stuck to the mirror's surface. It is not done because the integrity of the aluminum is compromised, but because it's a better choice than cleaning for practical reasons.

From http://global.kyocera.com/fcworld/charact/chemistry/chemiresist.html - alumina can potentially be remarkably resistant to chemical attack compared to other materials - note logarithmic scale. 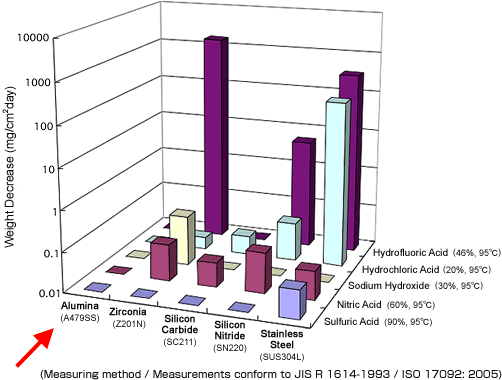 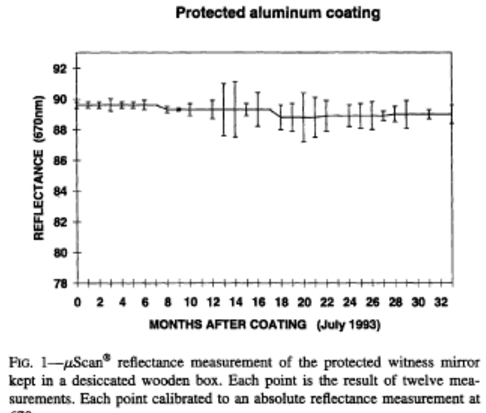 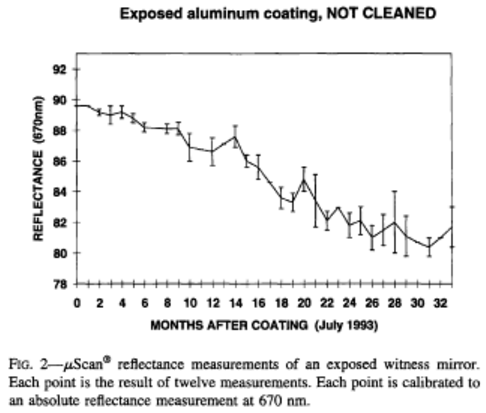 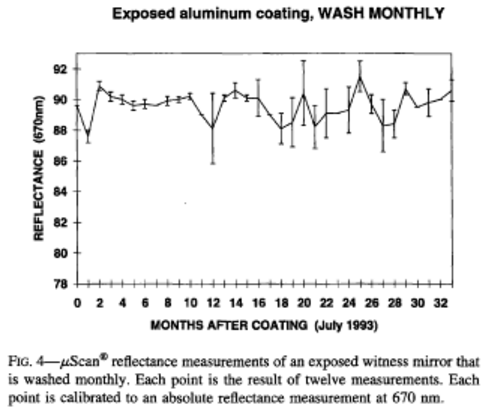 I apologize for the length of this answer, but this is a complicated subject to address. Thank you all.

I owned a camera store for many years, and have 60+ years in photo. I got my start in photo via Astronomy in high school. Went to the University of Iowa, started in Physics and Astronomy, but my math skills were not up to the task, so went to Radio-TV-Film. The physics was a great basis for photography as you might well imagine.

I knew just enough Physics and science to be a danger to myself and those around me.

Several years ago, a product called ROR (Residual Oil Remover) came to market, invented by a man from Illinois whom I knew casually. His premise was that in today's world, much of the 'dirt and dust' we perceive on optics of all kinds, is suspended in microscopic droplets of oil in the atmosphere, and as we wear glasses and walk in or move about, those microscopic droplets, also containing dirt/dust of all sorts, coat optical surfaces and everything else, and we breath the stuff.

I would guess that this oily deposit may also be a cause for some of the 'rapid' deterioration of optical coatings on telescope mirrors, it builds up over time, dries, which forms a glue or sticky layer which also causes dust and dirt to build up more rapidly.

If you can find ROR in a local camera store (or similar), get a bottle, I used a Kleenex tissue to clean my glasses. Spray the ROR directly on the glass, both sides, one lens only, gently rub it until it dries, then put on the glasses and compare the views, you should be amazed. The other effect of ROR was that as you cleaned the glass once, then a second time, the glass simply becomes slippery. The ROR, somehow, cleans the micro pores of the glass and removes the deep down sticky, oily material.

Of course, it can be used on any optical glass surface as far as I know

It was endorsed, as I remember, by NASA, FBI, Nat Geo, etc. so good credentials.

Not the answer you're looking for? Browse other questions tagged telescope observatory mirror or ask your own question.

8
Why telescope mirror glass shipped as randomly broken chunks of a constant size in cardboard boxes?
5
Was the use of silver on 'optical' telescope mirrors more common in the past? Why?
6
Do primary mirrors in large observatories undergo regular removal and re-coating of the aluminum? Why?
2
Source of mirror reflectivity data
1
Is moisture harmful to a Newtonian Reflector?

5
Was the use of silver on 'optical' telescope mirrors more common in the past? Why?
6
Do primary mirrors in large observatories undergo regular removal and re-coating of the aluminum? Why?
2
How did Johannes Hevelius' long telescope work? Why all the round holes?
9
Why are telescope mirrors made of glass?
1
Why are larger hex mirrors round and the smaller aren't?
9
Why was the Vera C. Rubin Observatory LSST Camera tested with a broccoli and a pinhole?
4
Why are telescope mirrors nearly flat?
1
How did I flip some mirrors around in the dark at 3 AM and change the focal length of a 24 inch Boller and Chivens?
1
Why did the famous Multiple Mirror Telescope (MMT) get rid of them and become the Massive Monolithic Telescope?