Refraction by Saturn's atmosphere - how dense is it here?

Roughly speaking, what is the density where this is taking place? Is it rarefied compared to earth but simply a very very long path length, or is this happening at a density far larger than Earth's surface atmosphere? How large is this refraction - like 0.1 degrees or 10 degrees? I can't picture the actual geometry very well.

This one may be a bit of a judgement call, unless this image happens to be further documented somewhere. 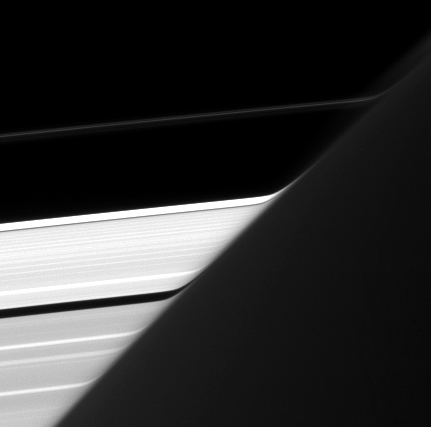 My first approach in considering this problem is to consider optical depth. In case you don't know what this is, optical depth, usually denoted by $\tau$, is a dimensionless number which is a measure of how much material light must pass through and interact with when traveling through a medium. The way optical depth is defined is such that a medium with $\tau\lt1$ means light can get through, while $\tau\gt1$ means light cannot get through. A more conceptual way of thinking about optical depth is to say that it represents, on average, how many atoms a particle of light will hit when trying to travel through a medium. That is, if $\tau=0.5$, then about half the light particles will hit something and be lost, while the other half will get through unscathed. If $\tau = 2$, then on average the light particles will hit two atoms and most light will be scattered/absorbed out of your line of sight, making you unable to see through that medium.

A simplified definition of optical depth is given by

Roughly speaking, what is the density where this is taking place? Is it rarefied compared to earth but simply a very very long path length, or is this happening at a density far larger than Earth's surface atmosphere?

Ultimately, you're asking what $N$ and $\ell$ are such that $\tau=1$, since this would be the point where the refraction stops and you don't see any more of the rings. Unfortunately, this is difficult to answer based on that image alone. At best you can look up a radial density profile for Saturn such as in Nagy et al. 2009 (ref. fig. 8.1). Note in that paper, they refer to height as the height above the 1 bar pressure level. This paper also gives you an idea for common atoms within the upper atmosphere and you can look up $\sigma$ for these atoms. Predominantly though, I imagine hydrogen will dominate the interactions so using the cross section of hydrogen will be a good approximation. Then assume some sort of approximate path length $\ell$ based on the geometry (maybe use the formula for chord length). Putting actual numbers into this problem could be a research project all to its own, but you can play around with what you consider to be good values for $N$ and $\ell$ such that you're constrained by the fact that $\tau=\sigma N\ell=1$.

How large is this refraction - like 0.1 degrees or 10 degrees?

This is even harder to answer. The only way I know to determine something like this is to run a full ray tracing model of light through Saturn's atmosphere. I can hazard a guess that the most refraction you're seeing there is on the order of 10 degrees. This is supported by Dalba et al. 2015 who actually did a ray tracing analysis of light through Saturn (in regards to planetary transits) and found refraction angles on that order (ref. fig. 2).

Not the answer you're looking for? Browse other questions tagged saturn planetary-atmosphere cassini or ask your own question.

8
When is optical refraction important in astronomy?
3
Why does Jupiter atmosphere does not get thinner on edges
4
Why does the moon 'peel' away from the horizon in this photograph?
3
Is Jupiter as opaque as it looks?
3
Surface of the Sun, or Jupiter, etc