In https://space.stackexchange.com/q/17498/12102 I asked about the Solar Probe Plus mission. Reading a 2008 report I saw that there is an elevated exposure to high velocity dust near the sun. I understand the high velocity, anything in orbit that close will be moving fast, but I don't understand why there is dust there.

What is the origin of the refractory carbon and silicates? Is this orbiting leftover material from the formation of the solar system, or is it falling in from farther out, or is it left-over carbon and silicon that fell into the early forming sun and is now being blown back out?

4.3.5 Micrometeoroid and Dust. Solar Probe+ will encounter dust particles ranging in diameter from submicron up to several hundred microns and consisting of highly refractory carbon and silicate species with a typical bulk density of ~2.5 g/cm2. The particles will be traveling at relative speeds as high as 350 km/s. To define the shielding requirements for Solar Probe+, a dust model was developed based primarily on the work of Mann et al. (2004). The model employs the following assumptions...

above: screen shot from SolarProbePlus2008

above: screen shot from NASA's Solar Probe Plus Fact Sheet 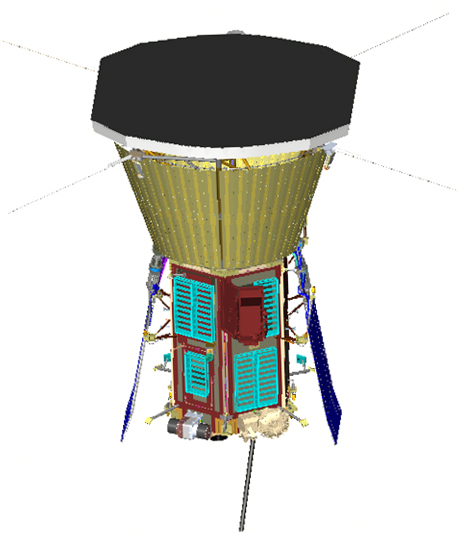 above: illustration of NASA's Solar Probe Plus from http://solarprobe.jhuapl.edu/spacecraft/ Sun is up - to state the obvious!

IPD of ~1 $\mu$m size drift sunward due to Poynting-Robertson drag while following roughly Keplerian orbits [e.g., Malaspina et al., 2014]. Closer to the sun, these particles break up due to collisions, sublimation/ablation, and/or sputtering.

Dust grains of ~0.1 $\mu$m size are the so-called "$\beta$ meteorites", which travel away from the sun due to the imbalance of radiation pressure over gravity [Mann, 2010].

The smallest dust grains with $\ll$ 0.1 $\mu$m size, the so-called nanograins or nanodust, act like large pickup ions, which are carried anti-sunward by the frame-dependent convective electric field (i.e., just the Lorentz force) produced when the dust grain moves relative to the solar wind flow (i.e., $\mathbf{E}_{conv} = - \mathbf{V}_{sw} \times \mathbf{B}_{sw}$, where the subscript $conv$($sw$) stands for convective(solar wind), and $\mathbf{V}$ and $\mathbf{B}$ are the bulk flow velocity and quasi-static magnetic field). These particles can reach speeds in excess of 100 km/s relative to the sun [Meyer-Vernet et al., 2009].

ISD was first discovered by the Ulysses spacecraft, which is ~1 $\mu$m size and moves at ~26 km/s relative to the solar system barycenter. More recent work [Malaspina et al., 2014] has found a relationship between dust impact count rates and ecliptic longitude.

The reason can be seen from the following. The Earth's transverse speed about the sun is ~29 km/s. Thus, when the Earth moves anti-parallel(parallel) to the ISD flow direction the relative dust-spacecraft speed is ~55(~3) km/s, which produced an enhanced(depressed) dust count rate. This occurs because there is a threshold impact speed necessary to produce a large enough plasma cloud (i.e., $\gtrsim$5-10 km/s depending on dust size) [Meyer-Vernet et al., 2009; 2014].

Some are attracted by a combination of gravity and Poynting-Robertson drag while the smaller grains are either "pushed" out by radiation pressure (i.e., $\beta$ meteorites) or "picked-up" by the solar wind Lorentz force (i.e., nanodust).

55
Sun constantly converts mass into energy, will this cause its gravity to decrease?
22
Does anything orbit the Sun faster than Mercury?
14
Space telescope located in outer solar system
5
Tidal influences of planets on the sun
6
How are heavier elements such as carbon and silicon distributed within the Sun?
8
Could rocks from Earth have reached the Kuiper belt, or Neptune at least? If so, how?
6
How much mass does the Sun gain from the Poynting-Robertson effect?
1
Move asteroid away with white color?

13
What is the predominant element in the dust of the Sombrero Galaxy?
12
How far apart is the dust in the Sombrero Galaxy's dust lane?
4
Why dust is optically thin in Far Infrared wavelengths?
6
How are heavier elements such as carbon and silicon distributed within the Sun?
6
What is the physics of the "spinning dust" contribution to Cosmic Microwave Background measurements?
6
Interstellar Dust properties
1
If Betelgeuse dimmed because of dust, what became of the dust?
3
How to estimate the temperature of an interplanetary dust grain?
9
Star formation - Is it just gas accumulation or does dust also play a role?