How are heavier elements such as carbon and silicon distributed within the Sun?

In a previous question I asked about the source of carbon and silicate dust that Solar Probe Plus will encounter in its close flyby of the Sun. It seems likely that most sources would include infall from outside the solar system or fragments resulting from collisions inside the solar system.

But the Sun is believed to be about 0.4% carbon and 0.1% silicon by mass (see here and here). I believe these represent the relative abundances during the formation of the Sun, but do not account for nucleosynthesis that early in the Sun's life.

Is the distribution of carbon and silicon in the Sun is believed to be uniform, or does it have a radially dependent distribution? Is there be any kind of gravitational settling, i.e. heavier atoms tending to move toward the center as happens in planets?

Since we can only directly measure elemental abundances directly near the surface using spectroscopic techniques, would the radial distribution come from some model or calculation?

A page from the Institute for Advanced Study links to data from various modifications to the Standard Solar Model. The newest given there is from Bahcall1 et al. (2005), which I'll use as an example. The authors' calculations depend on data from the Opacity project. Data from two models are available through the IAS link: the BS05(AGS, OP) model and the BS05(OP) model; the difference lies in the main thing you're interested in: heavy element abundances. BS05(AGS, OP) has, for instance, a central2 $^{12}\text{C}$ mass fraction of $7.79\times10^{-6}$, while BS05(OP) has a central $^{12}\text{C}$ mass fraction of $1.05\times10^{-5}$. All of the central data from the major thermodynamic variables (e.g. pressure and temperature), as well as the mass fractions, are well within an order of magnitude in each model.

Other new models agree (though not all), to less than an order of magnitude or so, with the data from Bahcall et al. Graphical representations can be found in e.g. this paper: 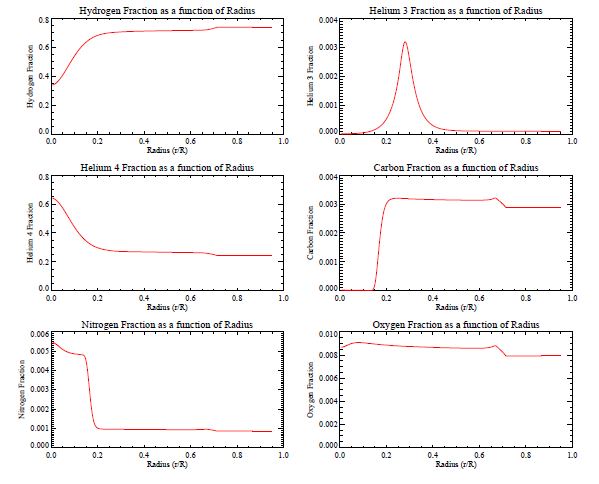 I'm unsure of the reason behind the $^3\text{He}$ spike; that may warrant a follow-up questions. My one guess is that this could be due to its role as an intermediate nucleus in the second step of the p-p chain. However, the same trends for each element are followed, although the changes in mass fraction are not constant at all radii $r$.

As for your question about how the central figures were derived, the answer is that helioseismological measurements and neutrino fluxes are some of the best indicators of composition. This was used as the basis for the BS05(AGS, OP) and BS05(OP) models, as well as, in fact, most variants of the Standard Solar Model.

1 This is Bahcall's page, so, naturally, these are some of his papers. However, the results appear to be consistent with the calculations of others.
2 Technically, this is from about 0.0016 solar radii, but this distance step is comparatively small.

Not the answer you're looking for? Browse other questions tagged the-sun elemental-abundances or ask your own question.

8
What is the origin of the dust near the sun?

20
How many sun-like stars are there in the universe?
12
Why is carbon so rare on the Moon and on Mars?
2
How do you find the altitude of the Sun if you are on the Moon?
18
Have we ever observed a body, such as a large asteroid, "hitting" the Sun?
6
Does the Sun impose back it's tidal forces onto the Earth (such as the Earth's to the Moon)?
4
How are the element abundances calculated for a meteorite in the Hydrogen log10 scale?
3
Is the composition of stars in future made of more and more heavy elements?
8
What is the origin of the dust near the sun?
3
What is a "differential chemical abundance"?
14
Formation of elements in the Sun other than helium