The Moon drifting away from the Earth [duplicate]

Through the action of tidal forces, angular momentum is slowly being transferred from Earth's rotation to the Moon's orbit. The result is that Earth's rate of spin is imperceptibly decreasing (at a rate of 2.3 milliseconds/century),[20] and the lunar orbit is gradually expanding.

If I did not misunderstand it, the current view on tides says that tidal bulges exert a torque on the moon, and L is tranferred to it, if that is correct, that L being transferred to its spin is increasing or decreasing it? Can you clarify also how a torque on the spin can produce a change of the orbit, which only implies a change (a decrease, in fact) of its orbital speed and not of the spinning speed? Can the spin (L) influence the orbital L, and how?

Can you give some details about this process, is the orbit changing shape, eccentricity?

This isn't a simple answer. Also, do you want to know this for a simple 2 body system or the more complex, essentially 3 body system of Sun-earth-Moon.

If the Earth and Moon were alone in the cosmos, far away from everything else, then over time, the tidal forces would circularize the Moon's orbit as it pushes the Moon away. The reason for this is that the same force that slowly pushes the Moon away from the Earth pushes hardest when the Moon is closest, and least hard when the Moon is furthest away, so over a long period of time that circularizes it's orbit. All 2 body systems where the moon is being pushed away tends to circularize. This can be observed in our own solar-system. Two body systems that are very far away from orbital disturbances, like Pluto-Charon or Neptune-Triton or even, Sun-Neptune, are highly circular orbits.

But when you bring the Sun into the picture, everything changes. The Moon orbits the Earth and the Earth Moon system orbits the sun, and in a very real sense, the Moon also orbits the sun, but it's within the Earth's stable region of it's hill sphere, so the Moon's orbit around the Earth will remain stable for billions of years. But while it's stable, it's measurably inconstant. The moon's orbit wobbles a great deal, being stretched and contracted based on it's position in relation to the Earth and Sun. 3 body mechanics is quite complex, even with stable orbits. Isaac Newton was aware of this but he wasn't able to work it out. Mathematicians who came later were able to figure out orbital interactions with more than 2 bodies, called perturbation theory.

So, your question depends on whether you mean a 2 body system or a 3 body system. 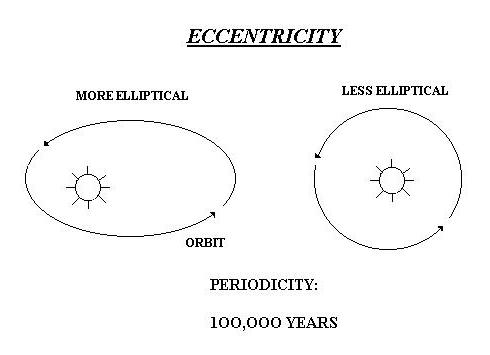 The Moon's apogee and perigee happen every 27.3 days (Sidereal orbit) and it's eccentricity changes measurably every orbit. In a sense, it's not very accurate to say the Moon even orbits around the Earth in an ellipse, it's too squashed and stretched for the elliptical model to be accurate.

While the Earth takes about 100,000 orbits to go through one elliptical period, the Moon needs only 6 or 7 orbits to do that. Note how measurably it's perigee and apogee change every orbit. See table.

There's a fair bit of information available on the Moon's irregular orbit, but I suspect that has almost nothing to do with your primary question. In general, in the 3 body system, as the Moon moves away from the Earth it's orbit grows more erratic, so in a sense, because of the sun, the Moon's orbit grows more eccentric, over time, where, if the sun wasn't there, it would grow more circular.

On average, as the Moon moves away it's orbital speed decreases. More distant orbits have less kinetic energy, but again, with a 3 body system it's more complex.

OK, I think I see what you're asking on Spin.

from Wiki "angular momentum is slowly being transferred from Earth's rotation to the Moon's orbit."

There can be no transfer, since both earth and moon are slowing down

Jupiter, for example, has about 71% of the total angular momentum of the solar system. See article, which I think is related to your question.

Expansion is best understood if objects aren't orbiting around each other. If the Moon was stationary and the Earth was stationary, and the only way to do that in our thought experiment is to give one of them a mass of zero so there's no orbit and no gravitational attraction. We're breaking almost every rule in the book with this thought experiment, but bear with me.

If we take the measured expansion of space to be 74.3 km/s over 3 million light years. Source.

Average lunar distance 384,400 km. And, 9.461 trillion km in 1 light year, so about 2.8 x 10^19 km in 3 million lightyears. Roughly 74 trillion lunar distances. which works out kind of neatly, 74.3 km/s divided by 74 trillion gives us one trillionth of a KM/s, 31.5 million seconds in a year gives us about .0000315 km/year expansion between a stationary, no gravitational attraction moon and Earth, which equals about 3.15 cm per year of expansion of space over 1 lunar distance, which is curiously not far off from 3.8 cm per year increase in distance due to tidal forces, but the similarity is purely coincidental as well as irrelevant.

20
Why is the Moon receding from the Earth due to tides? Is this typical for other moons?

17
How was Io not torn apart by tidal forces during its formation?
4
Could an asteroid knock the moon out of its orbit?
6
Does the Giant Impact Hypothesis explain how the Moon circularized its orbit?
5
Could a moon orbit an Earth size planet in such a way as to create a solar eclipse lasting for several weeks from start to finish?
0
Why do planets' orbital velocities drop off by less than a third when twice as distant from the sun, rather than three-quarters? If gravity is $1/4$?