How far can the Sun and the Moon get?

I noticed that last June the Sun was on the tropic of Cancer and moon on Madagascar: 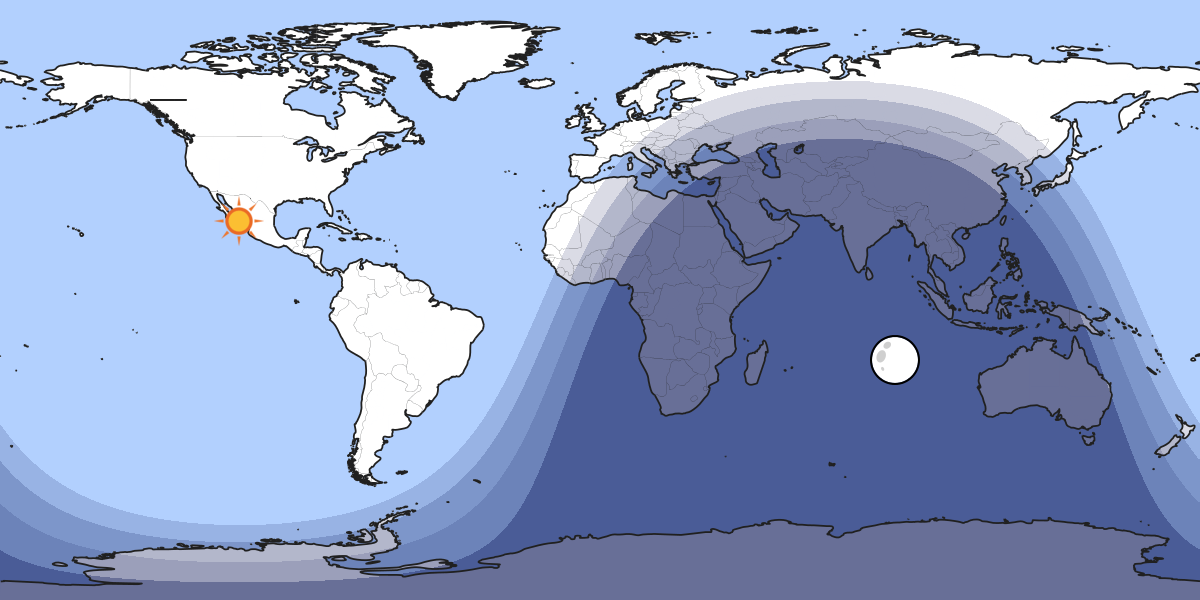 Can you explain how that works and if they can get even farther in latitude?

The Moon's orbit is inclined by about 5 degrees to the ecliptic so moves over a somewhat wider range of the sky as seen from the Earth. The Moon orbits the Earth every 28 days or so, so moves over that range each month.

At full Moon the Moon is opposite the Sun in the sky, so if the Sun was close to the tropic, then the Moon would be around the opposite tropic when full, and so on.

You mean the point on the Earth where the sun and moon are directly overhead? Just as eclipses can happen, being on opposite sides of the Earth can happen too. Generally speaking this is a lunar eclipse. Directly opposite, just like solar eclipses are relatively uncommon because the moon orbits the Earth on a different plane than the Earth's orbit around the sun, so the timing has to be just right for them to line up. (see somewhat exaggerated diagram).

For example, if you were to carefully draw the equator across the picture you posted, you'd see the Moon and Sun are not at opposite latitudes, which they would need to be to be as "far apart as possible".

5
How to calculate geocentric conjunction time and moon altitude at a given time
9
How can one explain the apparent motion of the Sun from a heliocentric point of view?
3
How can the next supermoon be analytically predicted?
5
Does the Giant Impact Hypothesis explain how the Moon circularized its orbit?
5
How far from the Sun can an Earth TCO (temporarily captured orbiter) go after leaving?
8
Why is Neptune true anomaly decreasing?
2
How can the oblateness of Earth impart torque to change the longitude of ascending node of a satellite?