Why haven't Earth and Venus got any tiny moons? Or have they?

Why haven't some meteoroids gotten caught in Earth's or Venus' orbit?

AFAIK most meteors are tiny fragments from comets. Shouldn't some comet tail sometime have passed Earth orbit at velocities suitable for our planet to capture such fragements? And 100 000s of asteroids have been detected. Why haven't the inner planets gotten asteroid like moons like the outer planets have? The asteroid belt isn't too far away.

Earth's large Luna might clean them away, but that won't explain Venus' lack of tiny moons.

The strength of the Earth's gravitational field compared to the Moon and the Sun is not enough to capture and hold satellites - there are too many disruptive forces that would rip them away over time.

However there are some objects at the Lagrangian points - the points where the gravitational fields of the Earth and other objects are equal and so it is possible to have a (likely-meta) stable orbit.

This gives some details about what might be found at the various Lagrangian points: http://en.wikipedia.org/wiki/List_of_objects_at_Lagrangian_points

@adrianmcmenamin Has the right idea here. These objects he is referring to are called Trojans, and are defined to be:

a minor planet or natural satellite (moon) that shares an orbit with a planet or larger moon, but does not collide with it because it orbits around one of the two Lagrangian points of stability (trojan points), L4 and L5, which lie approximately 60° ahead of and behind the larger body, respectively.

Near to each massive body in the solar system (Earth included) are minima, maxima, and saddle points in the potential energy landscape due to the combination of said object and the Sun.

It is possible for objects to essentially get caught in the more stable of these extrema. Jupiter, being the most massive, has quite a number of these types of objects. 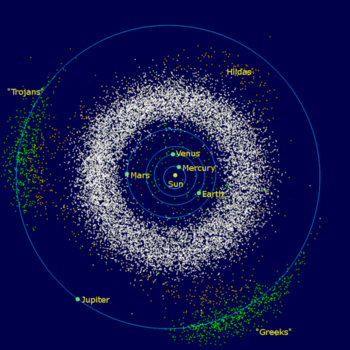 However, one such object has been discovered orbiting around a stable Lagrange point in 2010, called 2010 TK7.

Not the answer you're looking for? Browse other questions tagged gravity earth asteroids natural-satellites venus or ask your own question.

35
Why does Jupiter have so many moons?
4
Would Venus have any significant effects on Earth if its orbit were entirely within the habitable zone?
9
Why does Saturn have both moons and rings?
8
Could Venus or Mercury have a moon that we haven't detected?
2
What planets and moons have we seeded with life (if any)?
1
If Venus had moon before and it fell back to Venus, why don't I see a unique, very big crater?
11
How was Earth's "quasi-satellite" 2016 HO3 "first spotted" and it's orbit determined?
11
Why haven't more captured small moons been found?
6
Why Venus evolved so differently from Earth?