Why do we keep orbiting through the Perseid meteors?

I understand that the meteors originated from the the comet Swift–Tuttle. Presumably they left the comet with some velocity relative to the solar system. As comets follow elliptical orbits presumably the meteors are generally also following an elliptical orbit. And as the earth follows a circular orbit, why do we keep meeting them every year despite being on different orbits?

This is probably best understood by picture.

Comet Swift-Tuttle is both on a highly elliptical orbit, and a highly inclined orbit, though the inclination of the orbit doesn't matter to your specific question, but it helps with the overall picture. What really matters for Earth getting a meteor shower is that the two orbital paths intersect. 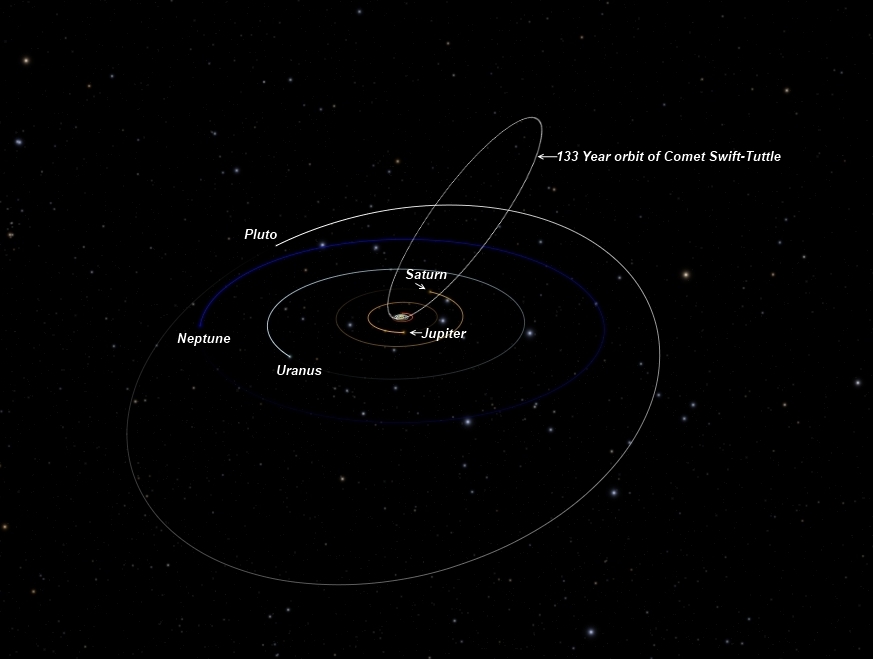 What makes the periodic meteor shower is the dust trail, that follows (and precedes) the comet (not to be confused with dust tail - that's something else). Any solid debris that gets blown off the comet at low velocity enters an orbit with a very similar orbital path to the comet and over hundreds or thousands of orbits, as the comet effectively gets broken up each time it passes the sun, the comet generates a dust or debris trail that largely follows it's entire orbit, at least, that's where the greatest concentration of particles is. Not all meteor showers are periodic, but all periodic meteor showers happen in this way with a semi permanent orbiting ring of dust that the Earth flies through once a year.

Dust trail (generally not visible, too spread out, unless heated by a close pass to the sun) 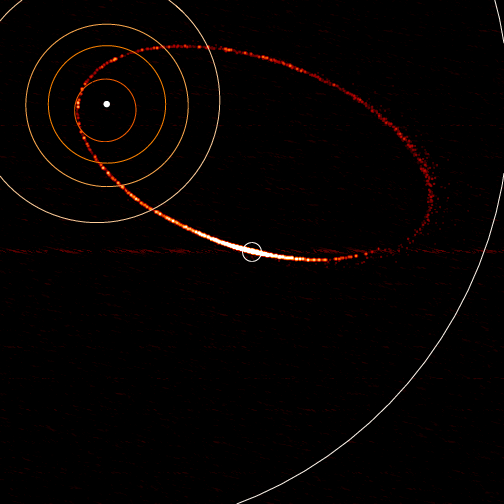 Dust tail (can be visible), only exists as the comet passes close to the sun.

Long period comets or near-parabolic comets are different because their orbits are much longer, though they can still generate trails during a pass close to the sun, they tend to be much more spread out given the enormous size of their orbits.

Because the Earth's orbit intersects Swift-Tuttle's debris trail once a year and the debris trail stays mostly in the same place, we get the Perseid meteor shower about the same time every year, and the meteors always come from the same direction in the sky.

Not every short period comet has an orbit that intersects with the Earth's orbit, which is why not all comets are associated with meteor showers, in fact, the majority aren't. 3 dimensions are hard to draw in 2-D pictures, but Pluto and Neptune can be used as an example. It's often said that they cross orbits, but they actually don't. Pluto gets closer to the sun than Neptune, but only when Pluto is near it's perihelion, at which point it's well below (or well above, depending on orientation), Neptune's orbital plane.

An interesting sidebar to this is that comets that give us meteor showers are also comets that are potential earth impacters.

Not the answer you're looking for? Browse other questions tagged orbit meteor or ask your own question.

5
Can General Relativity indicate phase-dependent variations in planetary orbital acceleration?
3
Leonid meteor showers and the Tempel-Tuttle comet
2
Are mass extinction events more likely during meteor showers / passing through comet debris?
3
Why are these objects moving at Vastly Different Speeds along the same orbit?
4
Can one approximate the semi-major axis of an orbit as the average orbital distance for eccentric orbits?
10
Where is the Perseids meteor shower coming from?
6
Cannot identify mistake in calculating orbital eccentricity vector; magnitude equals one instead of zero (with python code)
2
Does Halley's Comet travel past the outer bounds of the Oort Cloud?