If a captured moon has prograde, circular and equatorial orbit, can we know it is captured?

As we know, Triton has retrograde orbit , which is an stong evidence it is captured by Neptune. Suppose if a moon is captured, but results in prograde orbit, and the orbit becomes circular and lies on equator of the planet after billions of years, can we still know(or find) it is captured?

If a satellite has a prograde, circular(ish) orbit, it will certainly be much more difficult to determine if said satellite has been captured or not. However, there are other indications we could look for in determining if that body was captured or formed in place.

As a general rule, the composition of any given body in a stellar system is a function of its distance from the star. The reason for this has to do with the temperature of the primordial disk as a function of distance from the Sun. Early on, as all the objects in our solar system were forming, the began coalescing out of the stellar disk surrounding our Sun. However, in order for objects to solidify out of this disk, they had to be cool enough to do so. Very close to the Sun, it was of course extremely hot and molecules like water or methane could not precipitate into solids. Only materials like iron and silicate could do so. Much father out, where it is colder, things like iron and silicate can still solidify, but now its cold enough that you can pack on ice and methane. This process is evident by the fact that Mercury, our closest planet to the Sun, has a core of almost complete Iron which makes up 42% of the planet's volume (compared to the Earth's 17% by volume Iron core). A graph of this concept is shown below. 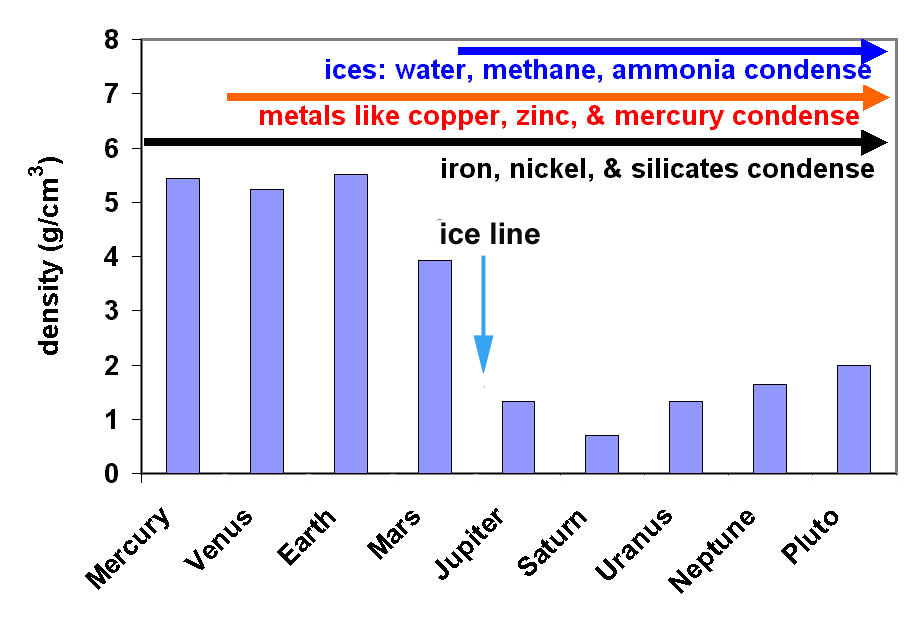 What this means for your question is that you can look at the composition of a given satellite and determine if that composition matches what we'd expect for an object forming at that location. If for example, you see a satellite around Saturn which has a lot of Iron and very little ice and methane, you can likely presume it formed closer in to the Sun and was captured by Saturn (how this might happen, I don't know but its just a simple example).

In fact, the Moon's nearly identical composition to the Earth is a strong indicator that our Moon formed in place (and from debris from Earth) rather than being captured.

Now of course measuring composition is no easy feat. You can determine something like that by analyzing any emissions the planet produces (such as with the water plumes from Europa) or else by flying a satellite very close to the body and measuring gravitational effects.

This is a less reliable method, but can be telling. The number and distribution of craters on a body tells us a lot about its history. If we assume that the surface of a given satellite is not constantly changing (through some geological process) then the craters on the surface represent a record of past interactions with that satellite. One approach I can imagine is to statistically predict the number of craters that should exist on the body given that it formed at its current position, then compare to what we see. If the surface hasn't been changed for billions of years, then a difference in the expected cratering indicates the body hasn't formed in the way we thought it might and possibly formed elsewhere or under different conditions. I admit though that this method is much less telling and more of a guess than using composition.

11
What is the current accepted hypothesis of what caused Triton's retrograde orbit around Neptune?
1
Is there some upper limit in the moon size distribution?
5
Why is the eccentricity of Triton so low?
9
Why do Uranus' and Pluto's moons orbit the equator? What makes a moons' inclination tilt with the rotational axis of their planet?
7
Is the Sun prograde or retrograde with respect to the rotation of the Milky Way?
2
How did “oddball” Valetudo, Jupiter's new prograde moon, end up in a wider orbit?
2
Various moon orbits
6
Has any moon achieved “retrograde equatorial orbit”?