Why doesn't the earth's surface collapse onto itself? [closed]

From what I know the sun (or any other star) nuclear fission keeps it from collapsing under its own gravity until the fuel runs out, if that's so why doesn't the earth surface like the tectonic plates collapse to the earth's core? is it because of similar processes that happen in the earth's outer core (nuclear fission)? and if so what would happen if they would once stop?

For the same (an more prosaic) reason milk skin floats over boiling milk - because it is lighter than the layer below. During the formation of the planet it went through a process called Iron Catastrophe, were a large parcel of the denser materials like iron and nickel sunk to the core, leaving the lighter materials close to the surface. 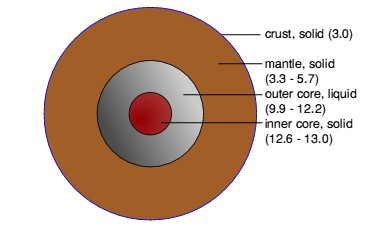 Fission contributes to keep our internal engine super-hot and well-oiled, allowing for our metallic core to spin and generate our magnetosphere. Eventually we'll run out of heat, the outer core will solidify and stop spinning.

Not the answer you're looking for? Browse other questions tagged earth gravity or ask your own question.

6
Is Earth's 1g solid surface gravity unusually high for exoplanets?
18
Why doesn't Earth's axis change during the year?
10
Why doesn't the sun pull the moon away from earth?
0
What's the proportion of Mars' surface compared to Earth's surface uncovered of water?
6
Angular diameter of the Sun's reflection from the ocean, seen from Sun-Earth L1?
23
Why can't we feel the Earth's revolution?
11
Is Earth's Surface “In orbit”?