I don't have any formal education in physics and I have found it hard to find a succinct and somewhat simple to comprehend explanation of what we think is the actual reality of a black hole. I'm asking after seeing a statement saying that the mass of the central supermassive black hole in the Phoenix Cluster was 20 billion solar masses and the diameter we think to be approximately 118 billion kilometres across.

Is someone able to point me to a resource or give me a simple explanation as to what we think a black hole actually is in shape? Is it a solid sphere with a central point and a radius of approximately 59 billion kilometres? A spinning disc with a face that is 118 billion kilometres across and if so what are the other measurements?

Am I thinking about this all wrong with regards to trying to understand it as a shape at all? If I understand correctly, mass doesn't give any indication of size as it is dependent on density. Is a black hole just basically a somewhat spherical body of mass like any other that just has an absolutely massive density and spin?

I should start off by saying that black holes are enigmas. In describing our universe, we have the General Theory of Relativity (GR) to help us describe gravity and objects which are very massive. We also have quantum mechanics (QM) and quantum field theory to help us describe small objects such as particles. For the most part, these two realms are completely separate and these two important theories don't mix. After all, you don't need QM to describe the physics of orbiting the Sun, and you don't need GR to describe electrons orbiting an atomic nucleus.

A problem arises though, when you begin talking about objects which require both QM and GR, and black holes fall very nicely into this regime. Often we find that when we mix the two theories, we wind up with nonsensical answers. It is highly probable that our understanding of the mechanics of a black hole is incomplete. What we really need is a quantum gravity theory to talk about black holes and as yet we don't have one.

That being said, let me lay out the basic structure of a black hole based on what current theory suggests to be true. Fortunately, black holes are relatively simple in structure, as dictated by the No-Hair Theorem (which basically says you only need a few parameters to completely describe the state of a black hole, as opposed to what you'd need to fully describe the physics of a person or even an atom). The (somewhat simplified) anatomy of a black hole is shown below. 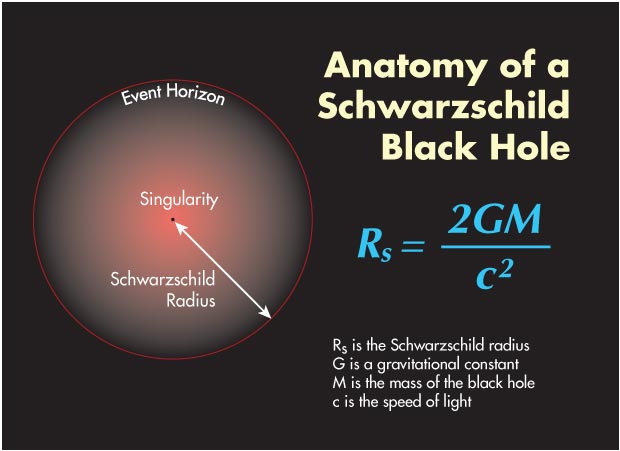 In this diagram there are a few important parts. The first being the singularity. When you put a bunch of mass together, gravity acts to squeeze that mass into a ball. That is what drives the fusion in our Sun and makes our planet round. Normally there is some resistive force that stops the matter from collapsing completely, such as the structural integrity of rocks in the Earth or fusion in the Sun. At some point though, if you pack on enough mass, that resistive force can't hold out and gravity wins. In this case, all the matter collapses down as far as it can go. It becomes a point of matter known as a singularity. This singularity has no size, it is literally (and mathematically) a point. All the mass of the black hole exists here. So when they say a black hole is 20 billion solar masses, they mean that the singularity contains the matter equivalent to 20 billion Suns, all confined to that single point.

There are further components to a black hole such as the ergosphere or photon sphere, and often black holes have accretion disks of material around them. I'll leave those concepts to another question though.

2
Why are black holes that massive?
3
Does conservation of energy make black holes impossible?
2
Why is the statement “black holes make up 1% of the mass of the Milky Way Galaxy” unknown?
4
How does gravity have an effect from the inside the event horizon of a black hole with the rest of the universe?
1
Could we see planets around active Stellar Mass Black Hole?
0
How did the authors determine both the spatial size of gas cloud HCN-0.009-0.044 and its central mass at the same time?