Are there any measurements of other galaxies indicating the existence of exoplanets?

Of course scientists assume there would also be exoplanets in other galaxies besides our own Milkyway. Is it true that our telescopes are not good enough to see planets in other galaxies, nor by brightness changes of the stars nor by inclination changes of stars. If so could the total mass of those galaxies be an indication of the presence of exoplanets, or is dark matter a problem for that?

Yes, it is true that our telescopes are not big/strong enough to detect planets in other galaxies. All we know at the moment are some few planets (not even complete systems!) around some of the stars in our closest galactic neighbourhood.
But let me explain why this is so.

Far away objects are very faint and thus send out few light-particles our way. To compensate this, we must build bigger and bigger telescopes to catch more light-particles from those faint objects. And at the moment we are limited until the 30-40metre class telescopes become active in ~2025.

However there is a class of 'cosmic accidents' that allow telescopes to catch more light-particles. We call those accidents micro-lensing events, as they briefly concentrate the light of a background star around a planet's gravitational sphere of influence. The result is a spike of light in our telescopes. The shape of this spike informs us about the characteristics of the lensing star and planet.

To put this into context with your question about other galaxies, I've plotted for you how far away we have discovered planets so far: 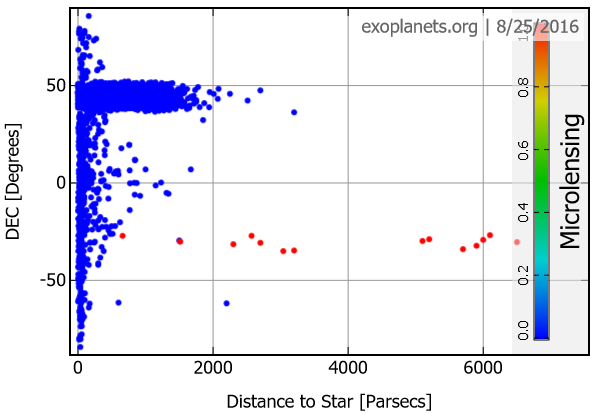 Here we have on the x-axis the distance to the planet-hosting star, and on the y-axis the declination (one of the celestial coordinates or directions).
In red I've painted the planets that we have discovered with microlensing, in blue are all other methods.
The microlensing discoveries lie all on one line around dec = -30°, because this is the direction of the galactic center, where the polish OGLE project is looking.
The famous US-satellite Kepler that uses the transit method has it's field of view around dec = +45°, and this is also the biggest blue bunch of discoveries. The small bump in between is the fov of the french CoRoT-satellite that also did some transit-discoveries and pioneered the transit searches from space.

So what do we learn from this graph?
We see that we can discover planets on a massive scale up to ~2000pc away. Further away it's only possible with luck (while OGLE also looks at quite an impressive number of stars at any given time) and lensing. Now to put this into context, our milky way galaxy has a diameter of ~40.000parsec, and the next galaxy, the Andromeda galaxy is 1 million parsec away.

So that's gonna be hard, even with microlensing, and even harder with the other techniques you've mentioned.
Although there is one event from 2009 claiming to have found something that looks like a planet in their lensing-curve, I don't think this technique is mature enough to announce that extra-galactic planet searches.

All discovered planets are in our Galaxy. The signature of a planet is too weak to be detected around the faint and unresolvable stars in even the nearest other galaxies. New telescopes like the Large Synoptic Survey Telescope will be capable of detecting transiting planets, and also microlensing events by planets, in the Magellanic clouds (e.g. see Mroz & Poleski 2017).

The fraction of galactic mass that is tied up in exoplanets should be a tiny fraction of the total mass. If you add up the mass of all the planets in the solar system you end up with around 1% of a solar mass (mostly Jupiter).

The fraction of planets that end up not attached to stars is also likely to be quite small. Essentially some fraction of planets might be stripped away from their parents during the earliest phases of stellar evolution in a dense cluster (where the minority of stars are formed actually). So free-floating planets are unlikely to contribute much and indeed this has been confirmed by experiments a decade and more ago to detect "massive compact halo" objects in our own galaxy, which were unable to attribute much of the dark, baryonic matter to planets or the like.

Not the answer you're looking for? Browse other questions tagged galaxy exoplanet or ask your own question.

11
What (actually) is the “ deprojected half-light radius” of this almost-all-dark-matter Galaxy?
0
What are evidences of stationarity of rotation of galaxies
5
Can we see the stars at the edge of the Milkyway?
4
How many galaxies can be seen in a given patch of sky
8
How would water-ammonia oceans behave?
1
Why are there no photos of exoplanets?
7
Are there any galaxies visible in the night sky around the Orion constellation?
2
How do disk-shaped galaxies then form at the sites of spherical galactic halos? Do the halo stars start orbiting or just sit in place?
1
How do galaxies move in space?