What would the night sky have looked like 12.9 billion years ago when galaxies first started to form?

If I stood on a theoretical earth at the time that galaxies were just starting to form, what would the sky have looked like?

Due to the smaller size of the universe would it have been densely packed with objects? If yes, what might I have seen?

Prompted by Hubble's discovery of Earendel, what would the night sky have looked like back 12.9 billion years ago? (ignoring details like the Earth and humans not existing back then),

Apparently this star existed at 7% the age of the universe. Does this also mean the universe was 14 times smaller and 143=2700 times more dense than today? And the night sky would have been 142=200 times brighter? So nearby Galaxies would be much bigger and brighter with an apparent size of several degrees in the sky. Or would distinct, well-formed galaxies even be apparent at that time? What structures would be seen? What would the population of stars be like - lots of big blue ones or a bunch of little red ones? They'd obviously all be very young.

Further back in time it would have been dark. Hydrogen clouds would begin to contract, as predecessors of first stars (population III) and clusters of stars.

Even further in the past (redshift between 300 and 400) the sky would have been glowing red by what we now call cosmic microwave background.

As @Gerald stated in his excellent answer, the Hubble XDF photo might describe the night sky - many irregular, blue galaxies. As the redshift at 12.9 billion light years is about $z=6.5$, the universe was 7.5 times smaller in radius at the time compared to what it is now.

More detailed description of the appearance of the night sky in 12.9 billion years BCE -including star-types, magnitudes, colors, apparent motion, distribution, etc. - with some solid explanation.

This rendition of a young Milky Way from Wikipedia might give a realistic impression as to how the night sky may have looked in the early universe. 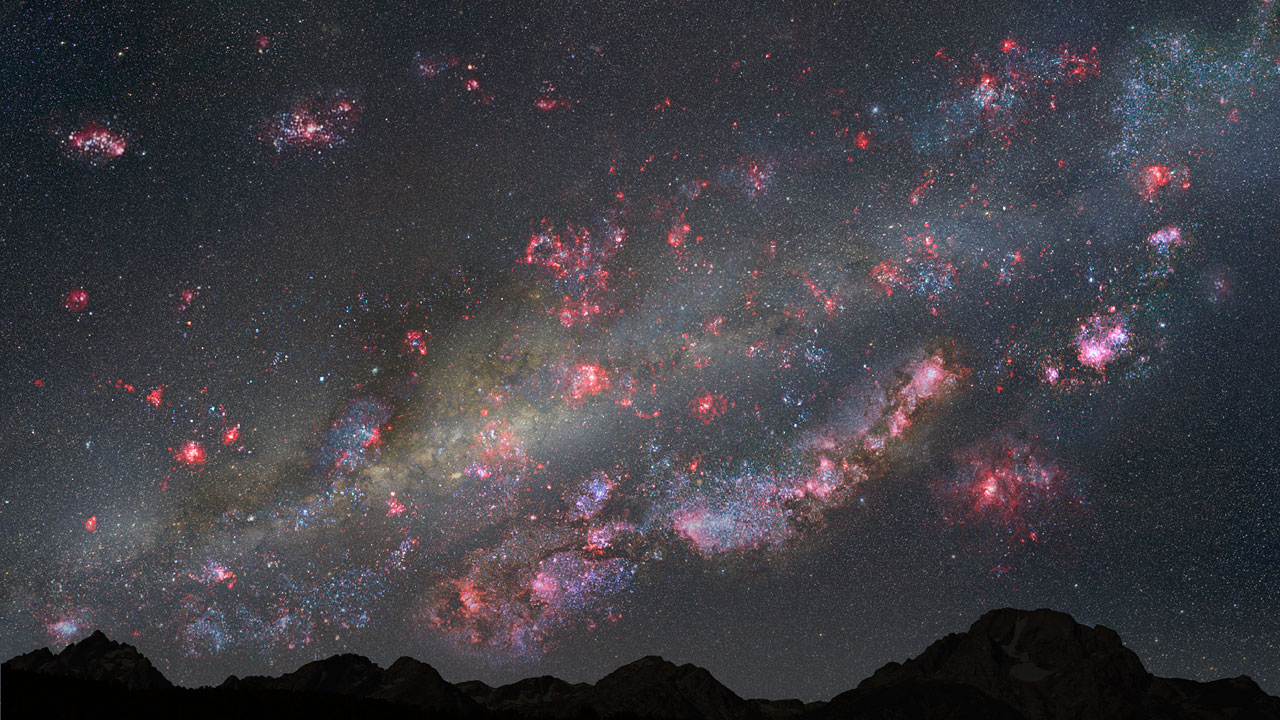 As seen, there is much more star formation hence more red (H-II regions) and blue areas (open clusters and nebulae), the central bulge of our galaxy is not as well-formed, perhaps because of a less-massive SMBH.

As you would expect in the young universe, most stars would be bluer, early type stars with very low metallicity (maybe population III stars?). Late-type stars that formed at that time would now be the old Population II stars we see today in galactic cores and old globular clusters. Given this distribution, the color of the night sky still would be black, but with more blue and red from hot, luminous stars and the red from star-forming regions and warm hydrogen clouds.

Apparent motion would essentially make no difference in the change of the night sky as everything still would be pretty far away (of the order of a few hundred to a few thousand light years) but still closer than the star-forming regions of today.

I hope this addresses some more detail than before, if you have any comments or concerns, let me know.

4
What did the night sky look like 100,000 years ago?
4
How many galaxies can be seen in a given patch of sky
3
Which kinds of astronomical observations most need to avoid the Moon being up?
4
Why do other galaxies have such a low surface brightness?
4
Earendel and HD1; identifying population 3 stars and galaxies