What is the resolution in megapixels of the Hubble Telescope?

What is the resolution in megapixels of the Hubble Telescope?

The HST cannot see the planet Pluto clearly. Why is that? 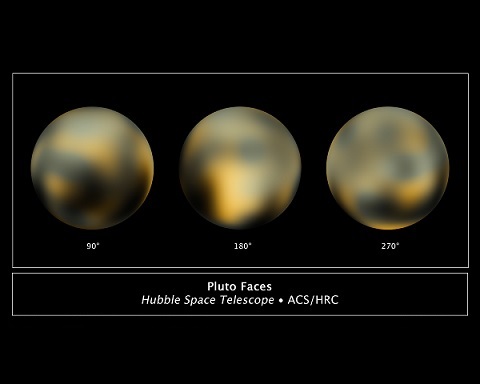 Just to address some of the potential confusion in the original question:

Talking about "resolution" in "megapixels" only makes sense if you're comparing different imaging chips in the same optical system: the same angular field of view, with the same angular resolution limit, imaged onto the chip. So comparing megapixels between, say, different full-frame DSLRs (or full-frame mirrorless cameras) makes sense, because if you put the same size lens on a full-frame Nikon or Canon DSLR, they image same field of view onto their chips, with similar if not identical angular resolution limits.

This comparison breaks down if you try to compare even the same camera with different lenses, because then the field of view imaged onto the chip changes. For example, I can put a wide-angle lens (large field of view) on a full-frame DSLR and take a picture of a lion at a distance. I'll get a great landscape picture, but if I zoom in on the lion in the resulting image, the lion will be blurry, with only a few pixels covering the lion. I can put long telephoto lens (small field of view) on the exact same camera, take a picture of the lion, and the lion will be very detailed and sharp, spanning lots of pixels (though I won't get the rest of the lanscape).

Many claims about megapixels in consumer and phone cameras, while technically correct, are mostly marketing blather, because there's no attempt to compare the fields of view and thus the effective angular resolution. This is why you'll be able to take much higher resolution images with a 20-megapixel DSLR than you can take with your 41-megapixel phone camera.

Another way to think about it is this: if we could put whatever chip the Lumia uses in Hubble, would we get sharper images? No. The Lumia chip has physically smaller pixels -- probably something like 1 to 1.5 microns in size, compared to the 21 micron ACS-HRC pixels. But, as Rob Jeffries points out, the HRC pixels are already small enough to resolve at Hubble's angular resolution limit. The Lumia chip wouldn't show any more detail than the HRC chip already does, it would just give you bigger blur per pixel. (There's also the fact that commercial imaging chips divide their pixels up between different filters to get R, G, and B images simultaneously, so in practice your "41 megapixel" camera only records about 13 or 14 megapixels per filter. Cameras on Hubble don't use per-pixel filters, so each single-filter image uses all the pixels.)

The size of the cameras that took the Pluto pictures is easy enough to find: the ACS Wide Field Camera has two 2K by 4K (hence 8 Mega pixel) CCDs, with a field of view of 202×202 arcsec. The high resolution HRC had a square 1 Megapixel camera with a 26×29 arcsec field of view.

The reason that the images of Pluto are relatively poor, is that Pluto is small! The size of the camera is irrelevant; it is the size of the pixels and angular resolution that are vital.

The pixel size of the HRC (which I think is what the pictures are mainly due to) is 0.025 arcsec, which matches the angular resolution of 0.05 arcsec. The angular diameter of Pluto is about 0.1 arcsec. Hence you effectively have an image that is only made of 4×4 pixels! I'm surprised it looks as good as it does - but that is because these are not the raw images (see below).

Edit: In response to comments I had a look at some details from the original paper describing these images, by Buie et al. (2010). http://iopscience.iop.org/article/10.1088/0004-6256/139/3/1128/meta It seems that what is shown is not an actual image from the ACS, but is a best-fitting map of what Pluto looks like, obtained by modelling all the images available.

The model image is described by a much finer pixel scale than the original images, but then blurred with a Gaussian filter. However, to quote from the paper, "The width of the Gaussian filter was chosen to impose a limit on the spatial frequencies in the output image comparable to the diffraction limit of HST. "

Just to hammer home the message. It really doesn't matter here how many pixels the HST cameras have, so long as they have enough to sample the angular resolution properly. At a 0.1 arcsec angular diameter as seen from Earth, Pluto has an angular size equivalent to trying to take a photo of a quarter from 50 km. It really isn't going to help you if you have the latest camera phone with a gazillion pixels unless you also connect it to a 2.4m telescope like HST with an angular resolution better than this.

Not the answer you're looking for? Browse other questions tagged pluto hubble-telescope or ask your own question.

23
Why is the Hubble Telescope in space?
7
Instrument aperture sizes on Hubble Telescope
13
Why is there a black stripe in the Hubble images of Pluto?
3
Hubble HST scheduling algorithm
5
Claim that 30-m class telescopes will have resolution far superior to Hubble: true?
1
How many science instruments can be used in parallel with the Hubble Space Telescope?
7
How good is the HST compared to ground telescopes?
2
who invented the Hubble telescope
8
Why was the (small) Hubble better able to find KBO targets for New Horizons than large adaptive optics ground telescopes?
24
What detail can Hubble see on Mars?