I just read in the EarthSky.org article Hours after discovery, asteroid swept by that the near earth asteroid 2016 QA2 recently passed the earth at about 85,000 km. The article says that it is a member of the Aten group of asteroids. That article links to this very cool GIF http://www.virtualtelescope.net/2016qa2_28aug2016.gif, however it's 40MB so it takes a while to load.

Aten asteroids are defined by having a semi-major axis of less than one astronomical unit (AU), the distance from the Earth to the Sun. They also have an aphelion (furthest distance from the Sun) greater than 0.983 AU${}^2$.

That link shows the following table and drawings. The text says:

Are $q$ and $Q$ really perihelion and aphelion respectively? The table says Aten asteroids have $Q>0.983$ but in the drawing for Aten asteroids it says $Aphelion<1.0167$. I noticed these values could be reciprocals, so there may be something more going on here. But at least on the surface there seems to be some contradiction.

Could someone confirm these definitions with an external source - and help me understand the basis for these limits that deviate from 1 AU by only +/- 1.7%? 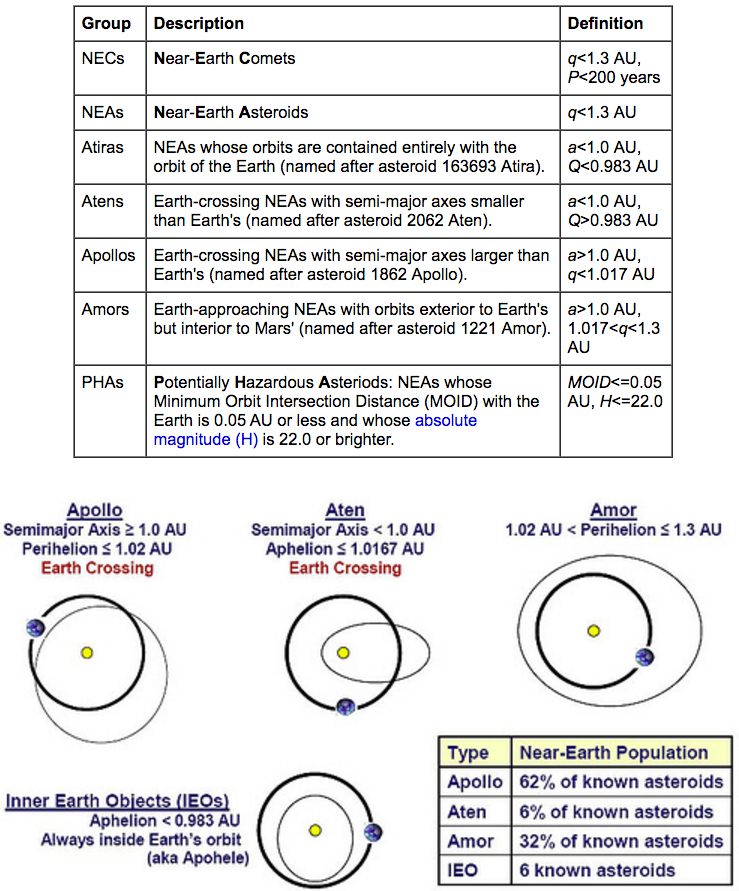 The image below is from this explanation: Near Earth Asteroid / NEO Classifications Based on Locations. It might be helpful for discussion.

An Earth-crossing asteroid has either an aphelion larger than Earth's perihelion ($Q \gt q_\oplus$, 0.983 AU), or a perihelion smaller than Earth's aphelion ($q < Q_\oplus$, 1.017 AU). For those which have both, the semimajor axis $a$ determines whether it is an Aten or an Apollo - subject to change by a close encounter with Earth.

This Minor Planet Center blog post is consistent with the JPL table. I think the diagram used the wrong inequality for Aten aphelia.

Not the answer you're looking for? Browse other questions tagged asteroids near-earth-object or ask your own question.

3
Has a near earth object in heliocentric orbit ever been bright enough to be visible to the unaided eye?

9
Do NEA (Near Earth Asteroids) have minable water ice?
3
What effect does the Moon have on the near Earth asteroid population?
1
How ready are we to deal with a asteroid/comet/giant-meteor on a collision course with Earth?
10
Could asteroid 'Oumuamua actually be round?
6
Did interstellar asteroid Oumuamua pass near other stars?
1
Are there any known asteroids with average density similar to that of Earth's?
4
Discovery of Near Earth Objects (NEO's)
4
Has Hubble ever been used to try to image a near Earth asteroid?
11
Opportunities to see a near earth object via unaided eyes or binoculars?