What was the nature of the signal received from the direction of HD164595?

There's been a story in the news recently of a potential SETI candidate signal received from the vicinity of star HD164595. What's the nature of this signal? Is it a single pulse of energy, or does it change over time? Can someone point me to a link or paper than shows it in more detail?

The page you link to contains what is, to my knowledge, the most descriptive graph of the signal from the RATAN-600 data that is open to the public. Bursov et al. have not yet presented their results, which will be explained at the International Academy of Astronautics SETI Permanent Committee meeting late this September. Chances seem to be good that we won't see much more information until then.

Here is the graph at a frequency of 11.1 GHz, as will be presented by Bursov et al. and as used in Croft et al. (2016), who very quickly put together a paper with an analysis of some basic follow-up observations using the Green Bank Telescope: 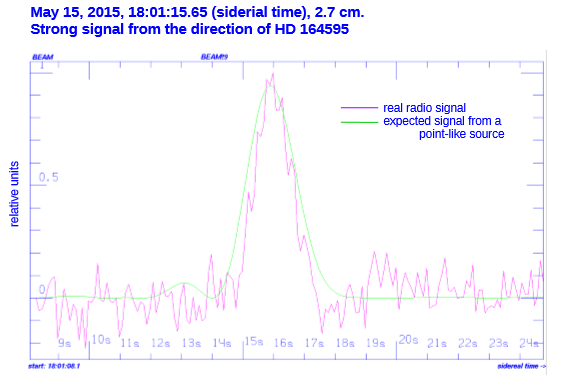 The main blip lasted only for two to three seconds - two seconds seems to be the popularly cited figure. Since then, no other group looking at HD 164595 has detected a repeat of the signal, and Croft et al. were unable to find anything similar in records in the NVSS catalog. Continuum imaging revealed nothing, and the authors concluded that the signal may have been due to observational error - although a one-time event is not out of the question.

Again, though, there is no more information forthcoming from the RATAN-600 group, and I expect this will be the case until the results are formally presented in full this September. Until then, this is all the data we have, but it appears to be the most important bit of data.

The Russian Academy of Sciences recently released a statement saying

Subsequent processing and analysis of the signal revealed its most probable terrestrial origin.

I'm not aware if the "processing and analysis" was done by the RATAN team or an outside group, but it seems more and more like the signal is not in fact from an extraterrestrial civilization. We'll probably find out more details two weeks from now.

I have yet to see any published results from the RATAN group after the IAA meeting about a month ago, and I haven't seen any articles on the findings. The IAA has some information on the meeting, but it has yet to add details to its Minutes page. Perhaps that will be released at a later date - and I assume it will be - but that could be a while. In the meantime, I'm taking the lack of information to mean that the RATAN group agrees with the analysis by Croft et al., and that the signal was a false positive.

Not the answer you're looking for? Browse other questions tagged seti .