How can we use hypervelocity stars to determine the origins of the Universe?

I was reading this article finding evidence of Universe's origin, which describes that in 1 trillion years we may lose the ability to determine how the universe was created.

The answer seems to be using hypervelocity stars. These are stars that have been ejected from their galaxy. Using the expansion of the universe, we can use the velocity of the star to then determine evidence of the Big Bang. But how does this work? Is there calculations we can do now that agree with our understanding of the universe and its age when working with hypervelocity stars?

I understand finding a hypervelocity star is very hard to do. I guess my thought here is that astronomers have modeled this scenario and found that if we were to find a hypervelocity star, we could then use the scenario above to calculate the age. I'm assuming the age calculated agrees with current estimates.

How can we use hypervelocity stars to determine the origins of the Universe?

First and foremost, I should clear something up: our knowledge of the Big Bang is incredibly limited, and so we don't even know the origins of the Universe today. General relativity and quantum mechanics both break down as you get closer and closer to $t_0=0$. All we really know is that something happened 13.8 billion years ago. However, if we look at the expanding universe, we can extrapolate that, 13.8 billion years ago, space was much less dilated than it is now.

General relativity suggests that the Universe would be packed into a singularity. This is not a good approach, since GR can't properly explain such conditions (QM is more fit to do so, but that alone can't explain how gravity acted), so we really haven't the slightest clue as to what happened 13.8 billion years ago. That said, we still know when the Big Bang (whatever it may have been) occurred, and that's what future astronomers may be able to find out.

The idea the article brings up is this: by one trillion years from now, the expansion of space will have driven away any other galaxies from our line of view, and CMB radiation will have become too redshifted to be detectable.

However, hypervelocity stars will likely be detected outside of the Milky Way (or rather, Milkomeda). Once these stars get far enough from the Milkomeda's gravitational influence, we can observe their acceleration due to the expansion of space, just as we do for many galaxies today. The 4-page paper the article is based on, Loeb (2011), actually makes this clear in a graph: 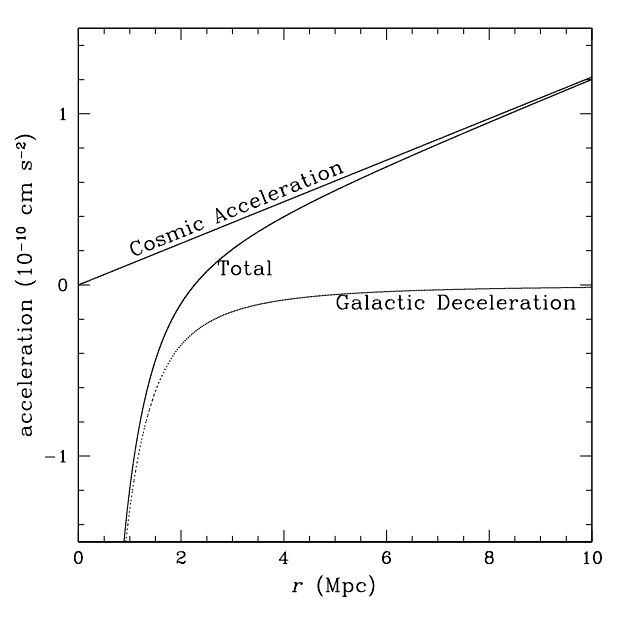 As the stars get farther and farther from Milkomeda, the gravity's pull on the stars will weaken and they will be accelerated by the expansion of space. This will really become noticeable once they are about 2.3 megaparsecs from the galaxy. Of course, these stars will not be easily found, but Loeb mentions that future astronomers will likely have advanced their tools and instruments by that time.

Loeb explains that, once we observe their redshifts as their distances increase, we can confirm Hubble's law. After this, we just need to measure the necessary parameters, and finally we can calculate the age of the Universe using the Friedmann equation: $$t_0 = \frac{1}{H_0} F(\Omega_r,\Omega_m,\Omega_\Lambda,\dots)$$

That's the gist of it. The hypervelocity stars will be the only extragalactic objects detectable by then, and thus we will rely on them to confirm our measurements.

Interestingly, Loeb mentions that observing and analyzing the expansion of the Universe at that time would answer some of the uncertainties we have today:

The working assumption so far was that the vacuum energy density remains constant and does not decay to a lower energy state over hundreds of e-folding times. Measuring the dynamics of hypervelocity stars at late cosmic times provides the added benefit of testing whether the cosmological constant is truely [sic] constant. Indications to the contrary might reveal new physics, such as that considered by evolving dark energy models.

Thus, even though much of the Universe will not be observable by that time, we will ironically have more answers about cosmology than we do today, simply by observing the few extragalactic objects that will be visible.

This is the general explanation of how we can find the time since the Big Bang. Remember that even now, we really have no idea about the origins of the Universe — it's a major unsolved problem in physics. All we know is something happened 13.8 billion years ago. Using hypervelocity stars, future humans would be able to determine the time since the Big Bang as well. Don't get your hopes up on humans surviving for 1 trillion years, though.

Not the answer you're looking for? Browse other questions tagged universe cosmology big-bang-theory future or ask your own question.

16
How can the universe be infinite?
3
How is the universe bordered?
46
How can 'HD 140283' be older than the universe?
0
Singularity at the time of origins
5
Will the conditions that allow life to evolve still be around in a trillion years?
40
How do scientists know that the distant parts of the universe obey the physical laws exactly as we observe around us?