How massive must a rocky body be to liquify adequately to eliminate internal mass concentrations that could disrupt natural satellite orbits?

Maybe a slightly weird question, and maybe more appropriate for some future geophysics SE, but I feel like this is what questions like Do moons have moons? are really driving at, and it just almost gets answered there.

How massive must a rocky body be to liquify adequately to eliminate internal mass concentrations that could disrupt natural satellite orbits?

Planets and moons are never going to be completely homogenized such that their radial density is perfectly spherically symmetric. They're always going to have mass concentrations (mascons) with regions of more mass than average. These mascons, due to the extra mass, cause gravitational anomalies of higher gravity in those local regions. These mascons exist for all bodies, be it the Earth (e.g., Hawaii), the Moon (e.g., Mare Imbrium), or Mars (e.g., Isidis Planitia).

Your question is to ask, how massive must a body be such that it can liquify itself and eliminate these mass concentrations so as to not disturb satellite orbits. This is specifically an issue in regard to orbiting the Moon because its Hill sphere is so small that only very low orbits can exist, but the mascons in the Moon make most of these unstable.

I think though, you're asking the wrong question. As I said above, the Earth itself has mascons which are in fact caused by its liquid interior! The region around and below Hawaii has a slightly higher than average mass caused by a mantle plume, effectively an upwelling of less dense material from the core-mantle boundary. Aside from creating the mascon, it was this mantle plume which also created Hawaii, but that's beside the point.

The point here is that all bodies have mascons, whether they have liquid interiors like the Earth or primarily solid interiors like the Moon. The difference between orbiting the Earth and the Moon though, is the distance you can do it at. The reason mascons are such a problem for orbits around the Moon is that you have to orbit so close such that the effect of these mascons compared to the general field is a noticeable perturbation on the orbit. If you could orbit the Moon farther out, they wouldn't be a problem. The opposite applies for the Earth. Most satellites around the Earth are very far away such that the Earth's mascons don't have any noticeable effect. If you orbited close enough (and likely that would require orbiting inside the atmosphere which presents lots of other problems), the mascons would become a problem just as they are for lunar orbits.

In fact, shown below is what the Earth would look like if you magnified all the various mass/gravity anomolies (such a shape is known as the Earth's geoid). All those irregularities would perturb a satellite if it had to orbit the Earth as close as it would need to orbit the Moon. 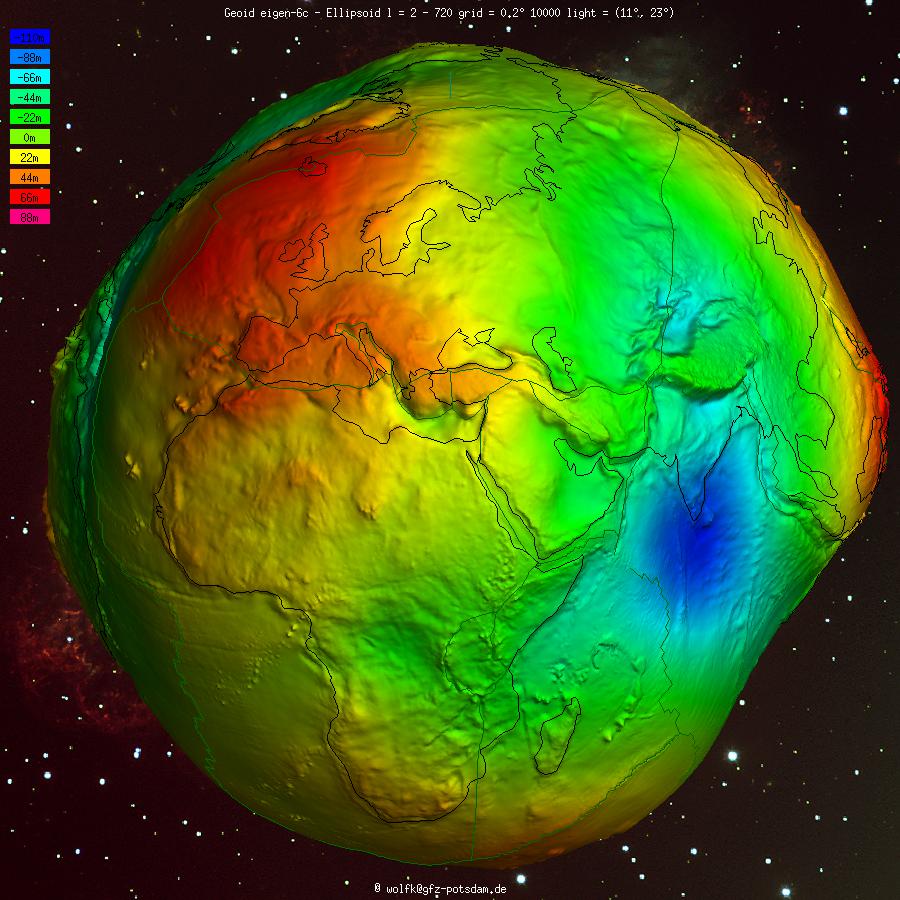 I know I kind of side-stepped your question, but I hope you'll agree that the question isn't really meaningful. All bodies have mascons to some degree or another, you can't get away from that.

Not the answer you're looking for? Browse other questions tagged orbit astrophysics natural-satellites geology or ask your own question.

34
Do moons have moons?
4
Could the Moon naturally capture a large asteroid and keep it as a subsatellite? For how long?

3
How do we know that a natural satellite cannot be a hollow object?