If this is a posible periodic solution for a three-body problem, can anybody tell me where is the center of mass of the system? As we know, in a n-body problem the bodies orbit around their center of mass, but here I don't know where it is. Can anybody help me? Thanks.

There may be some three-body periodic solutions that orbit around a common point, but in general they get a little crazy-looking and may not always contain an immediately obvious center of mass from casual observation. But of course it will always exist.

If you watch closely, you'll see that whenever one body reaches the intersection point, all three are on a straight line with the other two equidistant (symmetric). If you look where this orbit was originally described mathematically, they probably defined the initial conditions with the green one in the middle - so that the y coordinates of all there were zero and the line at that point is horizontal.

At those moments (all six permutations are present) the center of mass is at the intersection point since the masses are equal.

If this is a possible periodic solution for a three-body problem?

What you've posted here is the classic "figure 8" orbit for a 3 body system. Originally the 3-body system was an unsolvable mathematics problem, until people started using computers to do the math for us. Recently, a set of 13 "stable" 3-body orbits have been found which were published in this paper. A diagram illustrating these orbits (with the accompanying caption) is shown below. 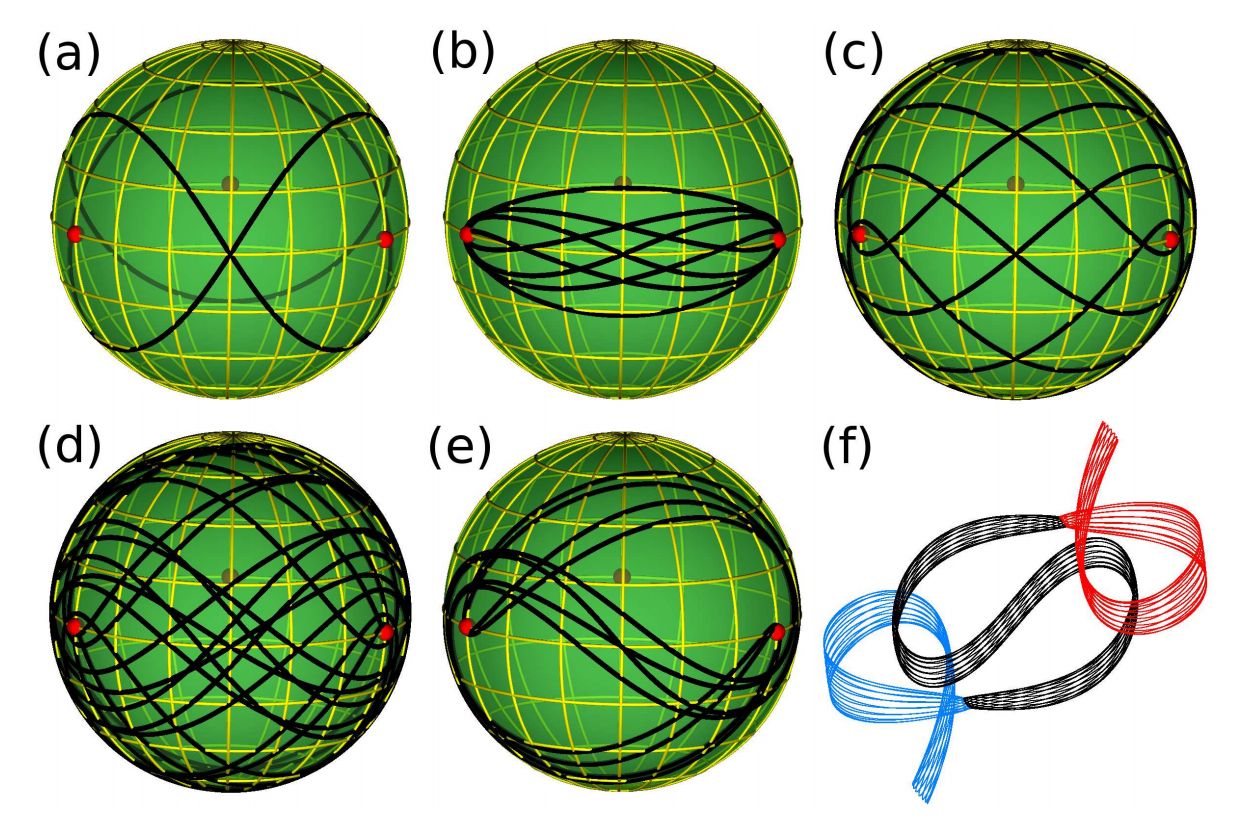 It is hard to tell, but the gif you've posted is represented by (a) above. So I suppose the answer to your question is, yes, the figure 8 is a possible solution for the 3-body problem. However, I should caution that there is no possible 3-body system which is stable for long periods, especially if those three bodies have nearly equal masses. Our Sun/Earth/Moon system is only so stable because $M_{Sun}>>M_{Earth}>>M_{Moon}$ and they all effectively have binary orbits. For three, roughly equal mass stars, your system gets wildly unstable very quickly. Pretty much any perturbation will knock your system out.

Can anybody tell me where is the center of mass of the system?

As we know, in a n-body problem the bodies orbit around their center of mass, but here I don't know where it is. Can anybody help me? Thanks.

All orbits are n-body systems. There's essentially no perfect 2 body systems anywhere in the universe. Our solar-system is an N-body, not a 2 body, but nearly all the orbits in our solar system approximate 2 body orbits.

Long term stable N-body systems are very similar to 2-body systems. Unstable or chaotic N-body systems like this one on Wikipedia, don't last very long. They turn into stable systems and in the process, usually eject some objects.

While I would be hesitant to try to prove this mathematically, the figure 8 orbit reminds me of balancing a pencil on it's tip. Slight variations tend to grow over time and it destabilizes quickly. (cool video on Pencil-balancing)

Not the answer you're looking for? Browse other questions tagged n-body-simulations celestial-mechanics or ask your own question.

2
For how many bodies can there be a stable orbit with no very heavy central body?
5
How to scale down solar system data to simulatable values
9
clarification of the Kozai mechanism
2
Why don't the stars in a binary star system of equal masses always orbit their center of mass in a circular orbit?
1
Two body orbit of equal masses
10
The deduction of the Hill Sphere formula
12
How to discover Neptune from the Uranus orbit (by computer simulation)
8
Horseshoe orbits and integration in C
5
Trisolar syzygy and it's effects on the planet
2
What kind of triangle is formed by three unequal masses in a circular restricted three body orbit?