Does the ecliptic precess? Does the Sun's rotation precess?

We know that the Earth, like a top, slowly precesses as it rotates. We know the Sun rotates, but does it precess as well? What about planetary orbits? Is the orientation of the ecliptic stable or will its inclination change over time? If so, would the orbital inclinations of the planets currently in the ecliptic change independently or in unison? We know the ecliptic is inclined with respect to the galactic plane. Would that have been a consequence of "residual" angular momentum when the solar system formed, or did it gradually take up its present orientation?

As you mentioned, the Earth's rotational axis undergoes a slow precession. This results from tidal torques caused largely by the Sun and the Moon. There would be no precession if the axial tilt with respect to the orbital angular momentum vectors was zero or if the Earth was spherical.

The Sun is almost spherical it's oblate to about $10^{-6}$, and is almost perfectly aligned with the ecliptic, it has a relatively slow rate of rotation, and all of the bodies that might cause a precession are far from the Sun, and because the gravitational gradient torque is an inverse cube relationship. All of these factors combined means the precession rate of the Sun is ridiculously small. So the short answer to your question is:

Planetary orbits are a little different, I'm not exactly sure how to state the process for their precession without waving my hands about the room, so I won't attempt it. However, I will say that, as all things in the universe, I am sure the ecliptic is a dynamic system unto itself.

About the ecliptic (dashed line) and the galactic plane (spotted strip) see the attached image. 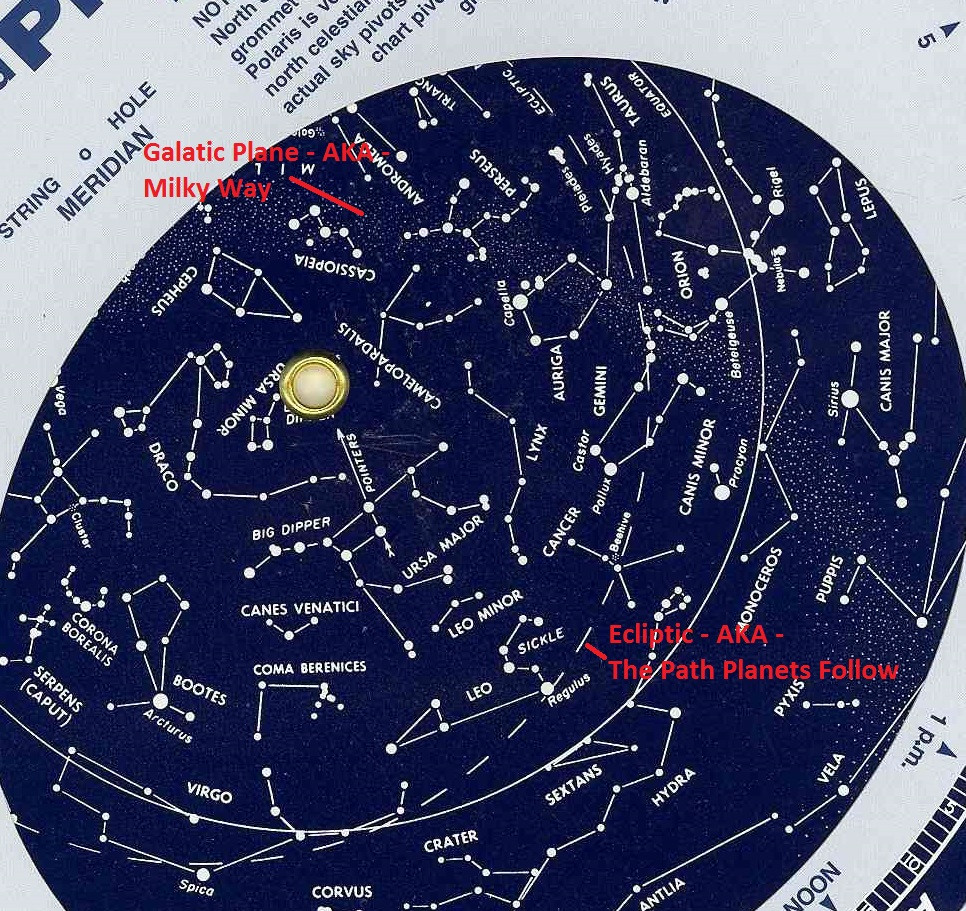 If the ecliptic and the galactic plane were aligned, the two would line up on top of one another, as the Sun's and other planet's paths would be roughly the same path.

There is still residual angular momentum within the solar system, which is how we arrived at our current orientation amongst the stars.

Not the answer you're looking for? Browse other questions tagged ecliptic or ask your own question.

1
Longitude of the Ecliptic
1
What visible star is closest to the ecliptic?
9
How does the earth's plane of orbit (ecliptic) vary over time?
2
What's the name of the point where you are closest or furthest from the ecliptic?
1
Ecliptic line plot in a map
2
Does the ecliptic plane change relative to the galactic plane?
0
Mars Ecliptic Latitude