Is there a spectrum of polarization? Does polarization vary depending on wavelength, from one and the same source?

Yes. Radiation may be polarized when it is scattered, and different media scatter different wavelengths differently.

For instance, neutral hydrogen scatters Lyman $\alpha$ radiation (i.e. photons coming from the $2$$\rightarrow$$1$ transition of hydrogen). The degree of polarization is coupled to the "phase function" which determines in which direction it is scattered. If a Ly$\alpha$ photon is close to the line center (which is at 1215.67 Ångström), it is scattered isotropically (i.e. equal probability of being scattered in any given direction), and will not be polarized, but if it is more than a few Doppler widths from the line center, it is scattered anisotropically, and will then be polarized. Maximum polarization occurs at 90º scattering, where $3/7 \simeq 43\%$ of the light will be polarized.

If the photons are even farther from the line center, they won't be scattered at all (because they're no longer in resonance with the $2$$\rightarrow$$1$ transition), and the radiation is hence unpolarized.

Example of polarization at a particular wavelength

The figure below, taken from Hayes et al. (2011), shows a so-called "Lyman $\alpha$ blob", which is a source of Lyman $\alpha$ that is quite a lot larger than a galaxy. There was some debate whether the radiation is created outside a central galaxy from gas accreting onto the galaxy and cooling — a signature of galaxy formation — or whether it is centrally produced (from stars) radiation that escapes the galaxy and subsequently scatters on the surrounding gas. If the latter scenario is true, you would expect the Lyman $\alpha$ to be polarized to some degree in sort of a ring around the center, because this light would be scattered at roughly 90º toward you. In the figure, the blue cross marks the center, and the red lines' direction mark the direction of polarization and their length mark the degree of polarization (if it were fully polarized, they would have the length of the red bar in the upper right corner).

Indeed it seems that the light is polarized around a central source. 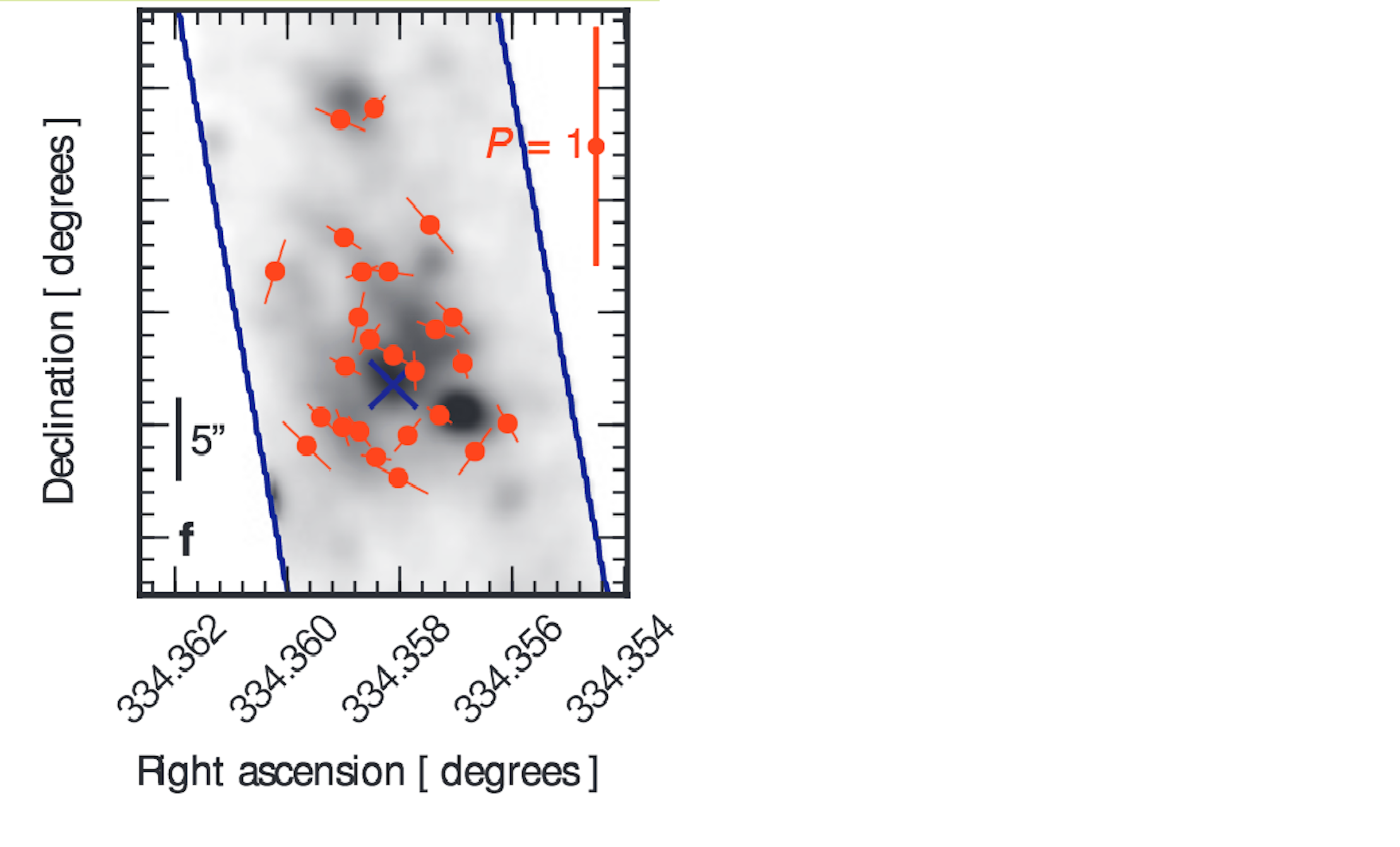 Yes, astronomers call it Faraday rotation. The polarization angle of radio waves changes dependent on the wavelength because of the galactic magnetic field.

Not the answer you're looking for? Browse other questions tagged light optics polarization or ask your own question.

10
Can Doppler shift make colors of two stars at same distance different?
3
Can the Sun be used as a point source of light to achive better focus?
5
Could someone see anything while being inside black hole?
1
Do far away planets reflect light in the same way our moon/earth reflects light?
11
Can you see the starting and the ending of a light beam passing in the distance?
2
How far away is this galaxy?
5
Do all stars of a given age and mass have relatively the same emission spectrum?
1
How are “parallel fields” implemented on the Hubble Space Telescope?
4
What is it about the layout of the three gratings in a Bahtinov mask that makes its indicate focus in this way?
0
Does a photon need to have EXACTLY the right energy to be absorbed by a gas molecule?