I've heard on various programs (yes TV) with "supposed" experts in various fields that there is evidence which would suggest that the moon could be hollow. The experts ranged from scientists, sound/audio analysts experts, to most importantly the . . . ancient astronaut theorists!

My question is to know if this has already been proven to no way be true, or how easily this could be debunked (or proven) and optionally a brief theory of what this could mean scientifically either way to prove or disprove, etc. for what this actually is . . . . . a story or could it be true.

The story seemed to also suggest Earth, the size of its moon, and the position of the moon to the Sun from Earth is extraordinary rare and some unknown technology could have done this so precisely. 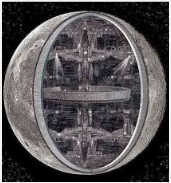 The gap between your question and physical reality is probably too broad to bridge. You need to provide us with a peer-reviewed (meaning published in a peer reviewed journal) theory. Unless you can, we can't really take this any further. Some of the problems with your question are: I don't know what you mean by "hollow"; your use of "evidence", "proven" and "true" shows you misunderstand the scientific method, and you invoke myths (ancient astronauts) as if such nonsense should be addressed scientifically! The mass of the Moon is known (to within a reasonable degree of accuracy). There have been a number of sets of seismometers placed on the Moon, and any model you (or your "experts") provide must be consistent with the data from those. The Moon is a large enough body so that over geological time frames, it has assumed an approximately spherical shape; any model which included a vacuum or gas filled interior would need to describe the materials of the shell which would not flow under the force of gravity and which were strong enough to resist the collapse of such a structure. In addition to gravity, centripetal forces, thermal forces, and impacts from asteroids/comets would also have to be resisted. The currently accepted model which best fits the evidence is that the Moon's core is an iron-rich solid surrounded by liquid/molten material. In Science, it is not the responsibility of the "status quo" to disprove any (hare-brained nonsense or otherwise) idea, it is the responsibility of the author of the proposal to show how it either explains some facts better or explains more facts than what is now "accepted". In general, we don't find it productive to hypothesize that the data is the result of some unnatural process. This can be a problem, especially when the data has been faked or manipulated; but that has been the rare exception. And since the physical world is self-consistent, erroneous data is, if important enough, usually identified as such. In other words, as LaPlace wrote:"The weight of evidence for an extraordinary claim must be proportioned to its strangeness." or as Carl Sagan paraphrased: "Extraordinary claims require extraordinary evidence". What is it you are claiming and what evidence are you using to support it?

Not the answer you're looking for? Browse other questions tagged earth the-moon or ask your own question.

17
If the moon wasn't receding from Earth, what would be the impact on the weather and tides?
5
Why don't stars move in the night-sky as the moon does?
23
Does the Earth have another moon?
2
Tidal lock of earth and moon
2
What would Earth be like without the Moon?
9
Can Earth host another natural satellite than the Moon?
2
What is the size of the largest asteroid orbiting the Earth, other than the Moon?
8
Difference in gravity on both sides of the moon