I would think that the amount of energy produced by one supernova is much more than a pair of colliding black holes, no? Wouldn't that much material and energy output from the explosion generate a powerful gravitational wave?

Actually the peak luminosity for the first binary black hole merger LIGO detected was $3.6 \times 10^{49} \,\text{Watts}$ (source). Whereas the brightest supernova ever recorded was ASASSN-15lh which had a peak luminosity of $2 \times 10^{38} \,\text{Watts}$ (source). In fact the energy radiated by the binary black hole merger during the $0.2 \,\text{s}$ it took to merge was over 10 times the combined luminosity of the observable universe (source).

In relation to the gravitational waves emitted by supernovae, their wave-forms are not as well understood as the "chirps" you get from merging black hole binaries, however they are still expected to be strong enough to be detected in the local universe.

Gravitational waves are produced by aspherical accelerating systems. A common example of a system that would produce them is two stars orbiting each other; an example of a system that would not produce them is a totally stationary, non-rotating spherical star. (More specifically, the production of radiation depends on the mass quadrupole moment and its time derivatives.

Supernovae are, on the whole, not spherically symmetric. We can see a simple example of this in pulsar kicks, where a pulsar resulting from a supernova is expelled at an enormous speed (generally several hundred km/s) that cannot be accounted for by the motion of the originals star alone. There must be some drastic asymmetry responsible.

What precisely would cause the emission of gravitational waves in a supernova? There are quite a few potential culprits (see Ott et al. (2012) and Kotake et al. (2005)):

On the whole, rotation will have a large impact, especially when it comes to core bounce and convection. This should be obvious; it creates an asymmetry before the collapse.

Will we be able to detect those waves? It seems likely. Figure 132 of Kotake et al. indicates that some of our present detectors should be sensitive enough to detect neutrino- and matter- based gravitational waves from close sources ($\sim10\text{ kpc}$): 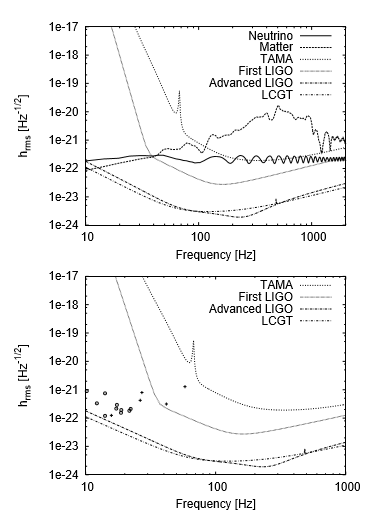 So far, LIGO hasn't been successful in this area, but it's quite possible for it to detect gravitational waves from supernovae.

If you're interested, I know of at least one site that has openly available data from theoretical simulations that you can compare to detection capabilities.

I think the problem the use of the word "energy" here. Energy comes in many forms, such as heat, electrical energy, kinetic energy...

The energy released by a supernova is kinetic (material being thrown out into space), electromagnetic (light created by atomic interactions), etc.

Black holes have 10 or 100 times the amount of mass of a single star, and binary black holes are orbiting each other incredibly fast (the peak speed of the GW150914 black holes was 60% the speed of light), so they will produce much stronger gravitational waves, but not as much light.

Not the answer you're looking for? Browse other questions tagged supernova gravitational-waves or ask your own question.