How would a small TCO (temporarily captured orbiter) or other natural Earth satellite most likely be detected?

A sentence from the abstract of The population of natural Earth satellites states:

At any given time there should be at least one NES of 1-meter diameter orbiting the Earth. The average temporarily-captured orbiter (TCO; an object that makes at least one revolution around the Earth in a co-rotating coordinate system) completes (2.88 ± 0.82) rev around the Earth during a capture event that lasts (286± 18) d.

As far as I know, the only known, well documented temporarily captured Earth satellite is 2006 RH120, which was in within 1 million km of the Earth for about 1 year. It has an estimated size of 2 to 3 meters, a rotation period (about it's axis) of about 3 minutes (presumably determined by photometry). According to Wikipedia:

Using data from the JPL Horizons database, it seems 2006 RH120 was only about 850,000 km from Earth at the time it was discovered.

Deep sky surveys are extremely prolific at detecting small solar system bodies. There was also a recent answer addressing the possibility that the Gaia spacecraft's could detect trojan asteroids associated with Earth's orbit, linking to the paper Detection of inner Solar System Trojan Asteroids by Gaia.

The question asked specifically about TCO's being detected by Gaia, but my question is more general: How would a small TCO (temporarily captured orbiter) or other natural Earth satellite most likely be detected?

Are there any searches specifically targeting TCOs? 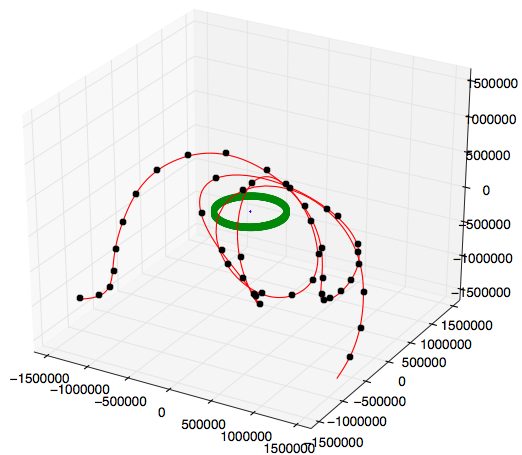 above: a simple plot of the orbit of 2006 RH120 from JPL Horizions transformed to an Earth-centered Earth-Sun-synodic frame - red line with dots every 10 days, for the period when it was within a +/- 1.6 million km cube centered on Earth in this frame. The green thick band around Earth is the moons orbit during this 448 day period.

Cruithne and J002E3 were detected using ground based astrophotography. J002E3 is thought to be "the S-IVB third stage of the Apollo 12 Saturn V rocket ... It is thought that J002E3 left Earth orbit in June 2003, and that it may return to orbit the Earth in the mid-2040s.1" Ground telescope also found 6Q0B44E which orbits beyond the moon. 2002 AA29 was found via automatic sky survey. Several of these objects are in horseshoe orbits.

Regardless, the discovery of these objects usually comes via conventional astrophotography.

Not the answer you're looking for? Browse other questions tagged observational-astronomy natural-satellites space-telescope near-earth-object gaia or ask your own question.

7
Can the Gaia telescope detect small temporarily captured asteroids near its Lagrange orbit?
11
How was Earth's “quasi-satellite” 2016 HO3 “first spotted” and it's orbit determined?
3
How do we know that a natural satellite cannot be a hollow object?
6
What colours can rocky planets (or moons) have
3
Isn't it likely that most extra solar planets don't transit their star in line with the Earth?
5
Where might astrometric observations of the Roadster spacecraft be catalogued?
5
How far from the Sun can an Earth TCO (temporarily captured orbiter) go after leaving?
3
When would we detect a tiny meter size natural satellite in a geostationary orbits?
2
Were K2-141b and WASP-63b selected as the first two exoplanet atmospheres for JWST to look at during its first year of observations? If so, why?
6
On what basis is the information about the distance and velocity of the Voyager probes determined?