I'm trying to simulate a virtual/imaginary "solar system" in software--just a hobby project for now. Unfortunately this has made me realize exactly how much math I've forgotten since college.

Complete accuracy isn't important, and I'm not looking to do anything sophisticated... no need for multi-body calculations, just a star and a planet will do. I just want something that a lightweight simulation or a game might do.

I'll have a configuration file with some basic starting parameters for each planet. At the start of the simulation, time=0 seconds, all planets would be lined up in a row (planning on just placing them on the same axis at their perihelion distance from the star). I'd like the planets to move around their orbits at the correct speed given the parameters supplied. So if I decide to set time = 1e10, I need to be able to calculate the x and y positions of each planet in their orbit at that precise time.

I'm flexible on WHICH parameters need to be provided. So if this becomes easier using some other method of defining the orbit, I'm open to it. Right now I'm thinking perihelion, mass, and time elapsed.

(Since this is a 3D simulation, eventually I'd also like to work inclination in, but I'm trying to start off simple for now, so inclinations will all be zero.)

Here's some sample parameter data below in case it helps provide a better example.

(Ex. Where would this planet be, in X/Y coordinates, at time=x?)

If someone posts a formula I can just plug in I won't complain. But if I could just be pointed in the right direction for what to learn or refresh my memory on, I'd like to try and figure this out myself. So far I've been looking at Kepler's 3rd Law equations but I'm not sure if that's a good place to start. Feeling a little guilty that I seem to have forgotten virtually all math I learned in college just over a decade ago, and I kind of want to reverse some of that decay. Hopefully this makes sense!

To do the simulation, you then have to follow this numerical scheme

As an "incredibly rhetorical" question, heh, can you see any ellipse-ness in the planets orbits? Your ultimate game result would, I imagine, look something like that webapp. The pink/orange lines showing the transfer of the two (real) spacecraft Earth to Mars would I guess be something like in your game.

I would just reiterate that literally for a game, or any conceivable "display of a planet system", all you have to do is "draw a circle" and "put a dot on it which moves around in a circle". Making game-like displays of planet system is remarkably easy - since the scale is so tremendously large, heh!

(Again you can simply get the year-length from the trivial formulas linked below, remembering you have to drastically alter timescale.)

Just for the record:

(1) as you say, place them at the desired distance and know the mass. (2) calculate the "year" length of time.

(It is trivial to do that with, as you say, Kepler's equations. Easily found, example: plug-in equations.)

Of course, you'll scale time. (What about 1 Earth-year is one minute?) (Indeed, you will of course have to radically scale-up the body sizes, or you will simply see absolutely nothing.)

I had a window open so I just did this in a game engine; it takes 7 clicks and 3 lines of code! 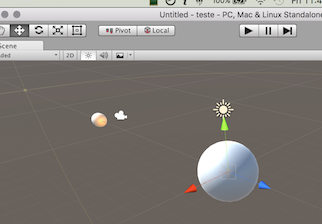 Note: you mentioned "simulation" in your original question. That term has a specific technical meaning (especially to anyone on this site), and it is utterly unrelated to what you are asking. Enjoy!

FTR I gather from your other question you want to show extreme "video game like" ellipses. Purely as a matter of interest, for your information the way you literally do that for literally a space-travel-like game (whether app or PC) is either

(b) nudge it as outlined for example here, using sin and cos (Or, all game engines or graphics/animation apis have a "ping pong" and/or "smoothing-at-ends" call, just use that.)

A reminder that your display will be drastically altered from reality since you will be presenting 10 or 20 months in, say, 10 or 20 seconds.

You don't need to do a physics simulation to do what you want. Kepler's laws of planetary motion will do just fine and they account for elliptical orbits of course.

You will have to do a bit more Maths if you want your orbits to be elliptical. The Maths you need is summarised here. This is a recipe for calculating $r$ and $\theta$ as a function of time, where $r$ is the helio(astro)centric distance and $\theta$ is the true anomaly, which is the agular coordinate at that point of time. In turn you would have to specify the mass of the star (and planet if it was significant), the orbital period (or semi-major axis), the perihelion(astron) position and the position at $t=0$.

The orbital inclination is independent of these calculations, since in this basic scheme there is nothing to alter the angular momentum of the orbit and so there is a fifth parameter defining that.

The calculations are reasonably simple though you will have to do something numerical (like the Newton-Raphson method) to get the eccentric anomaly in step 2.

If you wish to start taking 3-body (or more) interactions into account then you will have to think about physics simulations. I think the scheme given by cphyc will work ok so long as you make the time step very small and don't integrate over many orbits. If you are interested in the stability or long term evolution of planetary systems that you setup then you will have to get into much more complex schemes, since the one suggested by cphyc is numerically unstable.