Do black holes pull in and keep spacetime itself or merely warp it but ultimately let it pass through?

Forgive my 'amazing' MS-Paint skills, but this is along the lines of what i'm wondering: 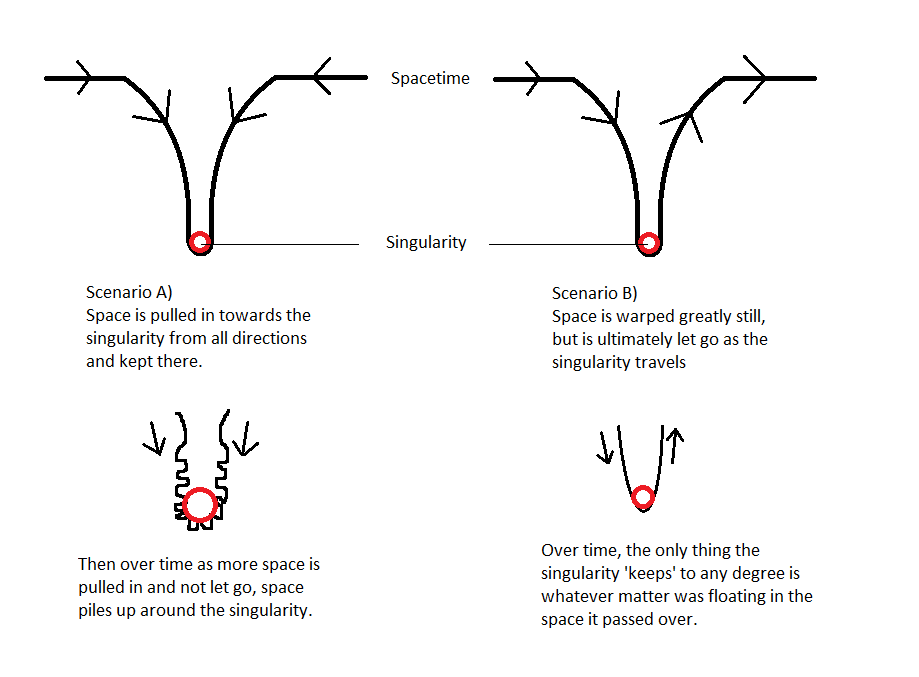 Is there any situation where Scenario A occurs, or is space always dragged back out as in Scenario B?

Black holes orbit things and galaxies move within space, so it would be safe to assume that black holes move through space-time and do not hold it in any particular state or position. They simply drag their "depression" along with them as they go.

Space is not a real thing, it is kind of a conceptual picture. However, there are standard ways to apply that picture that work reasonably well. One such picture is that all gravitational objects "pull in" space, and keep it as long as the object remains an intact massive body. Not just black holes, even the Earth. You can think of the space as being like it is made of rubber and is being contracted whereever there is mass. This is a poor man's version of the concept of curvature of spacetime, but it works quite well. Note that if black holes eventually dissipate by Hawking radiation, then they will "let go" of that space. But it won't re-expand until it rejoins the "Hubble flow" of the Big Bang, and dark energy gets a hold of it-- it seems that empty space is just empty space, it does not have a memory of its own history. More formally, what we mean by space is just a coordinate system for talking about relationships like distance and motion. Whether or not space "moves through" an object is really just an issue of reference frame and coordinate system.

Not the answer you're looking for? Browse other questions tagged black-hole space-time mass .

24
What is a singularity? What is at the center of a black hole? Specifically regarding space-time
4
What type of energy is escaping from black-hole's poles?
4
Looking for help in understanding how black holes can move
4
highspeed black holes or neutron stars on (almost) head-on collision course and kinetic energy
1
Black holes and material interaction
3
In layman's terms, why do we put the "time" in space-time?
0
As a black hole passes through spacetime, does it affect it?
6
Could a black hole pass quiescently through the Oort cloud?