Did we discover how nebulae hold their shapes?

As you know, nebulae such as the Eagle Nebula, the Cat's Eye Nebula, and the Pillars of Creation, have extraordinary shapes. But have we discovered why that is so? I've tried researching it myself however all that comes up are theories of a magnetic field, etc.

"Nebula" is quite an imprecise word; over the years, it's been applied to everything from interstellar dust clouds to supernova remnants to the birthplaces of stars to even galaxies. Wikipedia separates true nebulae into four categories: H II regions, planetary nebulae, supernova remnants, and dark nebulae. In this case, it might be better to make the distinction between nebulae that primarily surround on star/star system and nebulae that exist in interstellar space, potentially encompassing many stars.

I'll classify planetary nebulae and supernova remnants as circumstellar nebulae. They're both the result of a star passing into the final phase of its life.

Planetary nebulae (which include the Cat's Eye Nebula) are the remains of the outer layers of gas given off by relatively low-mass stars, like the Sun. Balick & Frank (2002) subdivide these based on morphology, into four categories:

The names describe the nebulae's characteristics fairly well. However, they show observation bias; for instance, a bipolar nebula may appear to be found if its lobes are lined up perfectly with Earth. The exact reasons for the distinctions aren't well-know; Wikipedia cites Jordan et al. (2002) (which I think you may have already read) in saying that magnetic fields could be the cause, but there are obviously other reasons for a lack of spherical symmetry: intense rotation (possible in an AGB star), violent mass loss (unlikely in stars of this low mass), a strong stellar wind, interactions with other bodies, etc. The latter may have caused the dramatic lobes of M2-9, where interactions with a binary partner produce extreme distended streams of gas: 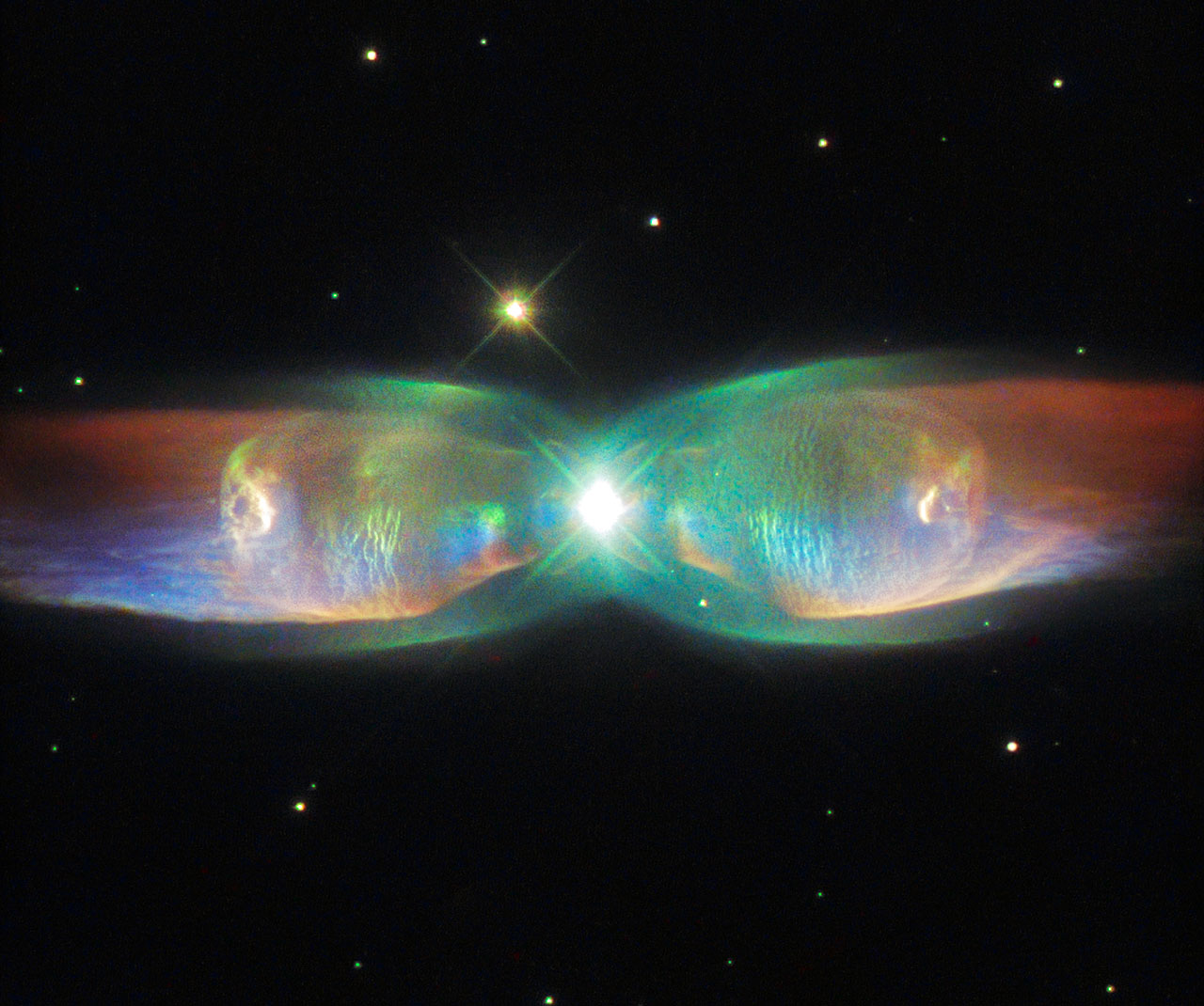 Image courtesy of the ESA under the Creative Commons Attribution 3.0 Unported license.

NASA has three pages on the different types, though it uses "composite" in place of "mixed", designating "composite" nebulae "Crab-like", after the Crab nebula. The shape of a remnant depends on which type it is; for instance, composite nebulae may be shaped by the stellar wind of the central pulsar.

H II regions (which include the Eagle Nebula, and of course the Pillars of Creation) and dark nebulae fall into this category. Both may be part of or interact with molecular clouds, which are the star-forming regions of the galaxy. H II regions, like molecular clouds, are shaped by the stars inside them. Radiation ionizes and even pushes away the gas surrounding young, hot stars, breaking up the nebulae. However, variations in dust density mean that different parts may "evaporate" at different rates, leading to some weird shapes - including the Pillars of Creation.

When I first read your question, I focused on the phrase (emphasis mine)

how nebulae hold their shapes

because nebulae are actually often extremely short-lived, on astronomical timescales. While the exact lifetimes vary, they're typically quite short when compared to stellar lifetimes:

25
Why is the Eagle Nebula so "static"?
4
How do proto-planetary nebulae gain momentum?
2
How useful are filters for spotting nebulae?
1
Eagle Nebula (Pillar of Creation) destroyed?
19
Why can space telescopes see through a planetary nebula?