tl;dr Has the brown dwarf observation been disproven?

I have just started reading about the interesting object V471 Tauri. The first two sentences of the introduction to The V471 Tauri System: A Multi-datatype Probe Vaccaro et al. (2015):

It's the "likely brown dwarf companion" I'd like to ask about. The paper with the catchy title "The First Science Results from SPHERE: Disproving the Predicted Brown Dwarf around V471 Tau" Hardy et al. (2015) SPHERE is a new, advanced adaptive optics system at the Very Large Telescope (VLT). The image below (figure 3) is part of the argument, and the suggestion is that if there is no brown dwarf seen in the band between the two white circles, then the predicted brown dwarf does not exist.

This would be interesting, because an alternative explanation for the slow, periodic drift in the eclipse timing would have to be found. One possibility is the Applegate Mechanism which I don't understand, but may ask a separate question after this.

Back to Vaccaro 2015, section 9, titled "On the Reality of the Third Star" is over six pages of discussion of the underlying assumptions, and if I understand it correctly provides several possible ways in which a suitable brown dwarf could exist but not show up in the SPHERE image. In essence disproving the existence disproof.

I would like to know: Is my understanding of the current situation correct? Have there been more recent developments? 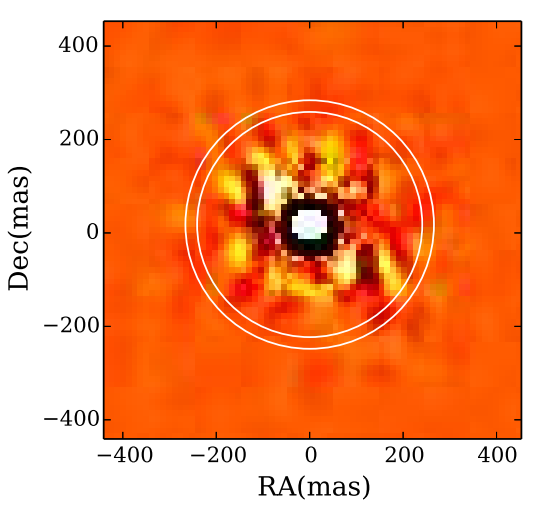 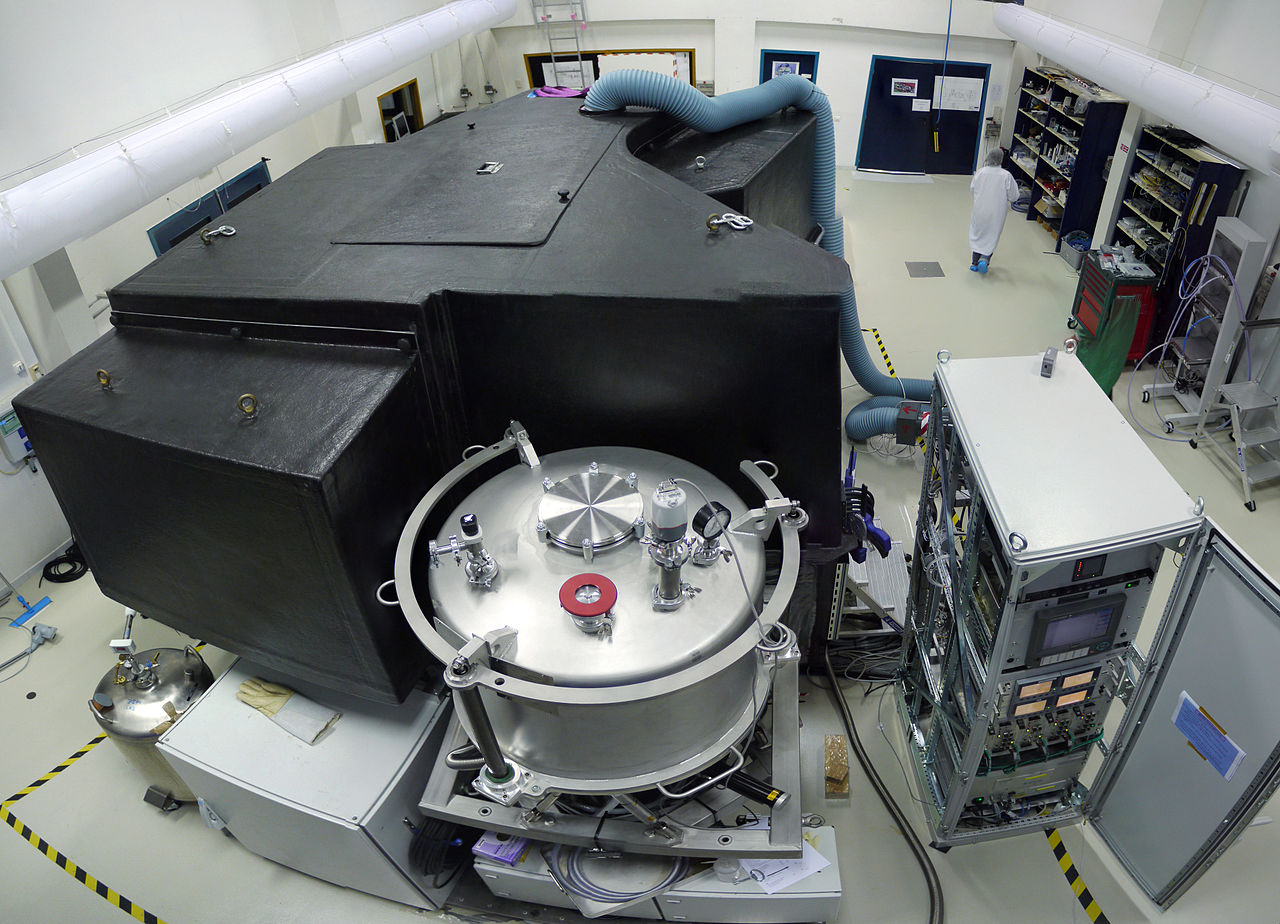 above: The monster currently known as SPHERE from here.

For all of these direct imaging results, the critical parameter is the contrast as a function of separation. This lets you know how much fainter an object you can see around the much brighter primary object whose light has been suppressed by the coronograph (the black circle in the center of the star).

From the change in eclipse timings (Figure 1 in their paper) you can predict the expected mass and separation of the third object (proposed brown dwarf) using their equation 1 since you know the mass of the binary. From evolutionary models of brown dwarfs, you can make predictions of how bright the proposed brown dwarf should be for its predicted mass.

You can then look for an object at the right separation in the SPHERE images. This is shown in their Figure 3 (right hand figure of the 2) where they show how bright an object they could see as a function of separation from the primary star; everything above the solid curve is something they should see. The vertical dotted lines show the boundary on the separation of the brown dwarf, predicted from the eclipse timings. The diamond symbol is the predicted brightness of the brown dwarf from the evolutionary models given its mass.

Since this is well above the contrast curve (by a factor of about 15x) and nothing is seen in the images at that separation, this strongly suggests that the proposed brown dwarf does not exist. The only "get-outs" are if the SPHERE team have measured their contrast curve incorrectly (unlikely at the level needed) or our models of how bright brown dwarfs should be are also wrong by about a factor of 15x and the brown dwarf is much, much fainter than predicted.

The Applegate mechanism is a bit weird. The idea is that as the star goes through magnetic activity cycles (as the Sun and a lot of other stars do) and the magnetic field strength grows and shrinks, this causes the shape of the star to change, bulging more or less at the star's equator as the cycle progresses. This changes the amount of angular momentum in the star, which has to couple into the binary orbit as the angular momentum has to be conserved, causing the binary orbit to shrink or expand. This would then explain the change in timings of the eclipses without the need for the third body brown dwarf tugging on binary. Unfortunately the Applegate mechanism, although it may work in V471 Tau, can't explain the variations in a bunch of other binary systems (magnetic field strength not strong enough) so it can't be the only solution for eclipse time variations.

The latest paper I could find that references the Vaccaero et al. 2015 paper, is Vanderbosch et al. 2017. They argue that because of the timing of the eclipses change but the spin period of the white dwarf secondary doesn't change, a third body such as a brown dwarf can't explain the changes as it should change the timing of both "clocks".

Not the answer you're looking for? Browse other questions tagged binary-star brown-dwarf infrared adaptive-optics eclipsing-star-systems or ask your own question.

2
Could an Applegate-like mechanism operate in AM CVn systems?