Why are most lunar maria on the visible side?

Is there any reason why the Earth side of the Moon has enormous plains and mountains, while the far side contains just few small ones inside largest craters?

The two hemispheres have distinctly different appearances, with the near side covered in multiple, large maria (Latin for 'seas,' since the earliest astronomers incorrectly thought that these plains were seas of lunar water). The far side has a battered, densely cratered appearance with few maria. Only 1% of the surface of the far side is covered by maria, compared to 31.2% on the near side.

One commonly accepted explanation for this difference is related to a higher concentration of heat-producing elements on the near-side hemisphere, as has been demonstrated by geochemical maps obtained from the Lunar Prospector gamma-ray spectrometer. While other factors such as surface elevation and crustal thickness could also affect where basalts erupt, these do not explain why the farside South Pole-Aitken basin (which contains the lowest elevations of the Moon and possesses a thin crust) was not as volcanically active as Oceanus Procellarum on the near side.

It has also been proposed that the differences between the two hemispheres may have been caused by a collision with a smaller companion moon that also originated from the Theia collision. In this model the impact led to an accretionary pile rather than a crater, contributing a hemispheric layer of extent and thickness that may be consistent with the dimensions of the farside highlands.

Though the far side has more visible craters, this is due to the effects of lunar lava flows, which cover and obscure craters, rather than a shielding effect from the Earth. NASA calculates that the Earth obscures only about 4 square degrees out of 41,000 square degrees of the sky as seen from the moon. "This makes the Earth negligible as a shield for the Moon. [...] It is likely that each side of the Moon has received equal numbers of impacts, but the resurfacing by lava results in fewer craters visible on the near side than the far side, even though the both sides have received the same number of impacts."

From wikipedia page and an other source.

EDIT: to complete the answer. 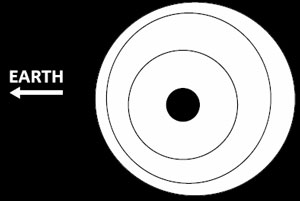 From space craft orbiting the moon, it has been found that the centre of mass of the moon is displaced toward Earth. An explanation of seas distribution states that lunar core, aesthenosphere and the mantle is off-centre, whereas the crust is not — so the crust is thicker on the far side (see figure). Thus the basalt would reach the surface more easily on the near side due to thinner crust (to 60 km near side, 100 km far) than on the far side.

This is largely speculation on my part; take it with a Moon-sized grain of salt.

For whatever reason, the Moon's mass is distributed unevenly; see Py-ser's answer for some plausible explanations.

The Moon's rotation is tidally locked, so one side always faces the Earth. Given this fact, in principle the Moon's orientation could be anything -- but the actual orientation is controlled by the uneven pull of the Earth's gravity on the Moon.

Wild speculation: My guess is that an orientation 180° away from the current one, with the maria facing away from Earth, would also be stable.

(This answer would be better if it included some actual numbers, but I don't have them.)

Not the answer you're looking for? Browse other questions tagged the-moon geology or ask your own question.

8
When did the Moon become tidally locked to Earth?
4
Why is the Moon smooth near the equator and bumpy near the poles?