Why haven't I seen the Moon?

It has been some time since I've seen the Moon. What are the conditions that might affect whether or not the Moon is visible within a 24-hour period?

Please take into consideration any notable astronomical effects: moon phases, light pollution, other viewing conditions. I want this to be applicable to other cases as well as my own.

Here is my particular case:

According to the NASA page about news and events related to the moon, the start of October, 2016 saw the moon enter a New Moon phase - where it is not visible, as explained on the site:

the new moon isn't visible, because it's between Earth and the sun, and the unlit side is facing Earth.

The 'unlit side' is often referred to as being the 'dark side' of the moon.

and as shown in the terribly-but-necessarily-not-to-scale diagram below:

The lunar cycle is roughly 29 days (the approximate time between consecutive new moon cycles as an example). There are many online 'lunar calendars' are available, such as from Moon Connection.

However, it is just as easy to observe the lunar cycles throughout the nights (weather permitting) - when the lunar cycles are heading towards a 'new moon', then it will appear to be 'waning', 'waxing' refers to the image of the moon 'growing' towards a full moon. Examples of how the moon would appear is shown in the NASA image below: 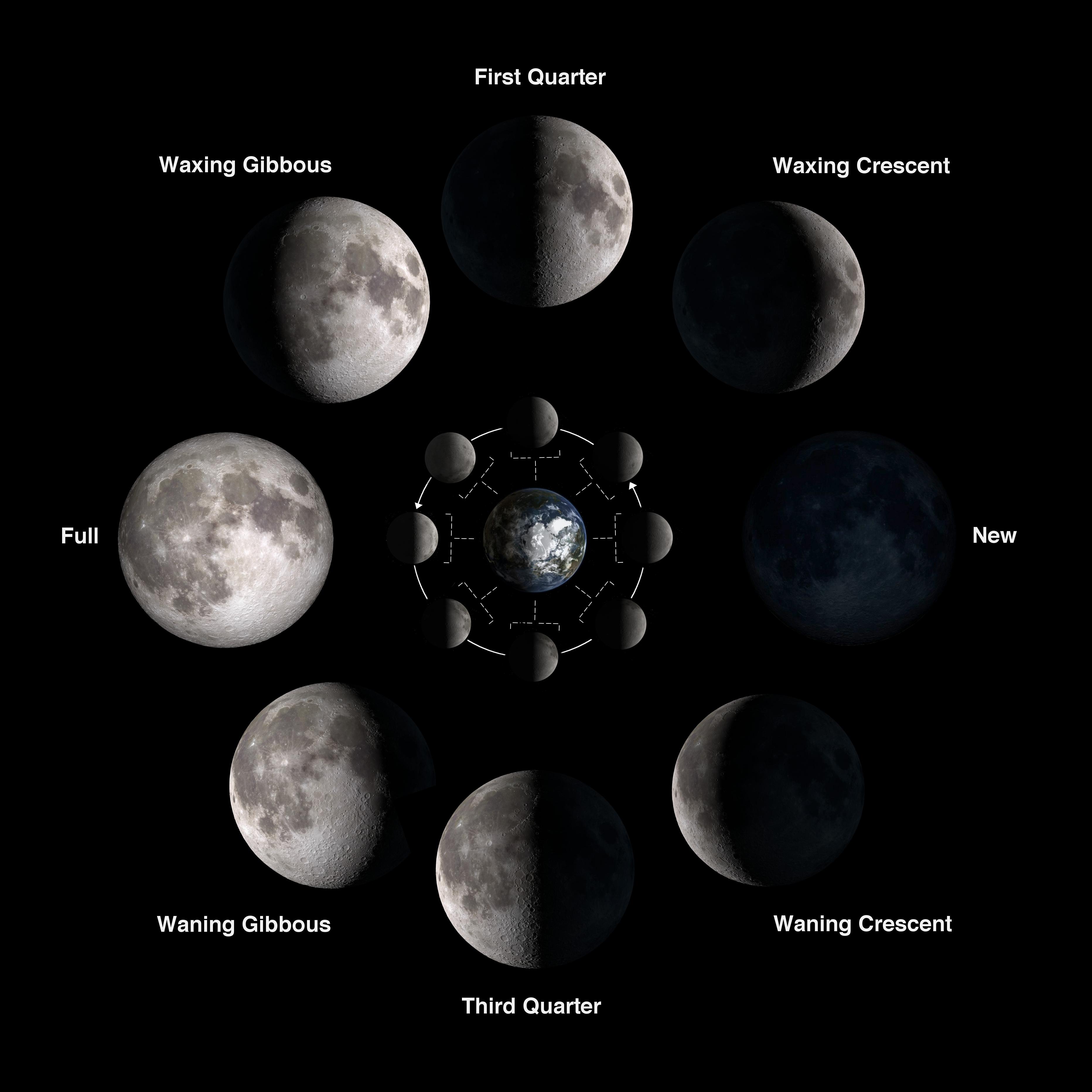 (Image from the NASA page linked above) - the cycle progresses anti-clockwise in the diagram.

Just to add to the great answers already posted: They are all concerned with the lunar cycle and rise/set time because these are mostly what governs whether you see the Moon or not.

You mention that you also want light pollution and other viewing conditions taken into consideration and these are all near insignificant compared to the lunar cycle and rise/set time (i.e. position). While light pollution can easily prevent you from observing stars it doesn't really matter when it comes to the Moon. It is so bright that you can see it even in the crescent phases - just like you can often see the Moon during daylight. Wikipedia puts the limiting apparent magnitude in Manhattan at 2, while the Moon doesn't go above 0 (it's at around -12 at full). Actually, the best viewing conditions for astronomers are when the Moon is not visible because it is a big source of light pollution itself. Other than that it might be cloudy but often you can catch a glimpse of the Moon or at least you can see some of the light from it through the clouds. Clouds also tend to disappear eventually so really, the most important aspects are the ones already mentioned in answers/comments. If you live near a mountain or tall buildings the Moon could certainly hide behind them but I don't think that counts.

The Moon is visible only when it is above the horizon and not too near the Sun. Those times depend on its position in the sky relative to the Sun, and the lunar phase is related:

timeanddate.com and other sites can provide precise times of moonrise and moonset for a given location and date.

Not the answer you're looking for? Browse other questions tagged observational-astronomy amateur-observing the-moon or ask your own question.

0
Where is the Moon for the last five or six days?
6
moonless night and lunar phase

68
How does the Earth move in the sky as seen from the Moon?
4
How Soon Could a Waxing Crescent Moon Be Seen?
6
Has star KIC 8462852's 3 year long Kepler-fading continued after the primary Kepler mission ended?
4
How do observational astronomers manage streaks and other artifacts from objects in Earth Orbit?
3
Moon's path as seen from Earth
2
Jean Meeus - calculating moon rise, transit and set times - help isolating error in logic
15
Has radio astronomy ever been done on objects that appear very close to the Moon? Is this avoided?
2
Has a near earth object in heliocentric orbit ever been bright enough to be visible to the unaided eye?