Explaining the Drake Equation on a smaller scale

So me and my friend were planning a video to explain the Drake Equation (within a time limit of 5 minutes), and we needed some help. This video is aimed at explaining the concept to an age group between 13-18 years, and having gone through loads of articles, we felt that a lot of the common audience would not be able to comprehend the concept.

So our question was, can we take the Drake Equation and try to explain it with maybe a real life example and on a smaller scale? It is an incredibly interesting equation and we felt like doing a good job of explaining it to a common teenager.

No need to make it complicated: what about this...

Just scribble a rectangle on a piece of paper, and say "there are 100 billion stars in our galaxy"....

Then, color off (let's say) 1/3 of the rectangle, and say "only one third of those are the sort of star that could have life, so that's blah billion"

(Note: the Drake equation has a number of fairly silly terms relating to "nuclear war!", which were added as political sops in that era; suggest ignore these unless you want to sound 90 years old!)

So just scribble a box or draw a line on a piece of paper ... or maybe use "a bag of marbles" as the other answer suggests.

Just BTW there is in fact an entire documentary (I noticed it on "Netflix") called "The Drake Equation" which does exactly what you say... 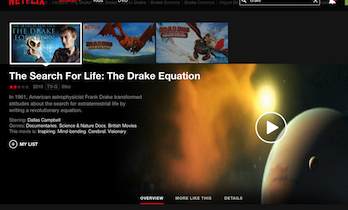 .. it is not really very good as I remember. I think the guy simply draws a line in the ground, to do the "fractions" demo, you know? (ie, they just erase more and more of the line). It doesn't need to be more complicated than that.

It's worth noting that the Drake equation simply points out:

(i) if you multiply those three or four fractions together, you get the number of civilizations in the galaxy. Which is self-evident.

but, the whole point is

(ii) we have utterly no clue - not even vaguely - what most of the fractions are,

You could say it's a written formula, which, helps clarify our thinking on, something we are utterly clueless about. So rather than just vaguely saying "we're utterly clueless," we can speak more clearly about the nature of our cluelessness!

(iii) very admirably, the issue of "How many stars have planets?" ... one could say that issue has been somewhat settled these very years, as we speak - that's great.

You have a number N of balls in an urn. Those represent the stars in the galaxy. Of those only a fraction is green, the rest is red. Green signifies "has planet", red "doesn't have a planet". You take the fraction of green ones that then host a planet in it's habitable zone and so on, for every characteristic the Drake identity describes.

In the end you just count how many balls with all desired characteristics on them you've taken out of the urn, relative to the total number of balls in the urn.

If you write the corresponding fractions in your video side-by-side with the undesired balls disappearing, it should increase the understandability further.

Not the answer you're looking for? Browse other questions tagged solar-system milky-way life astrobiology or ask your own question.

2
Is the Drake Equation an accurate way of finding the probability of life on planets?
3
Milky Way stellar number density : is the stated equation in this paper incorrect?
4
Why won't the Milky Way colliding with Andromeda affect the Solar System?
6
How to scale down solar system data to simulatable values
4
Why is right ascension measured on a 24 hour scale rather than a 23 hours and 56 minutes scale?
1
The equation for calculating how many times Earth (or our solar system) has revolved around the Milky Way
5
Will the conditions that allow life to evolve still be around in a trillion years?
2
Could Planet Nine be much smaller than thought previously?
3
The Solar System formation
2
Looking for a Solar System Simulator including the smaller celestial body, for macOS