From our world's perspective, does the full moon look larger in one city than it does in another?

When I was a very little girl, my dad talked about the HUGE full moon he saw while in the navy. He made the comment during a full moon we were having in Western NYS. He said, this (harvest) moon is nothing compared to the one he saw.

Now years later, I was with my grown son, who's a geologist and who has been all over the world but not during a full moon. He told me my dad was wrong. My son said that the full moon is always about the size of a penny when you hold the penny up to compare the size of the moon to it.

But I have seen pictures of HUGE full moons over cities my whole life and I assumed my dad was correct. Is there a place where I can travel to see a HUGE full moon that would be much bigger than the full moon I see from the shores of Lake Erie? I understand that the horizon makes the moon bigger but the pictures I have seen were not moons on the horizon.

I've searched Stacker's data base but I didn't see this question.

Your son is more or less correct. The moon's size doesn't change appreciably. At best you only see the size vary by about 13% (in angular diameter).

The variation in the apparent size of the moon comes from the fact that the moon's orbit around us is not perfectly spherical and sometimes it is closer and sometimes farther. The moon will appear largest when a full moon coincides with the moon being at its closest point in its orbit. This is colloquially referred to as a "Super Moon". The opposite, being at its farthest point in its orbit during a full moon, is known as a "Micro Moon" or "Mini Moon". These are really the two extremes, but most often the moon is a more average size that doesn't appear to change much. Shown below is an image of both a Super Moon and a Micro Moon. You can see the size difference, which is noticeable, but not hugely so. If you want to see a large moon, find the time when the next Super Moon occurs (a good upcoming Super Moon is on November 14, 2016). 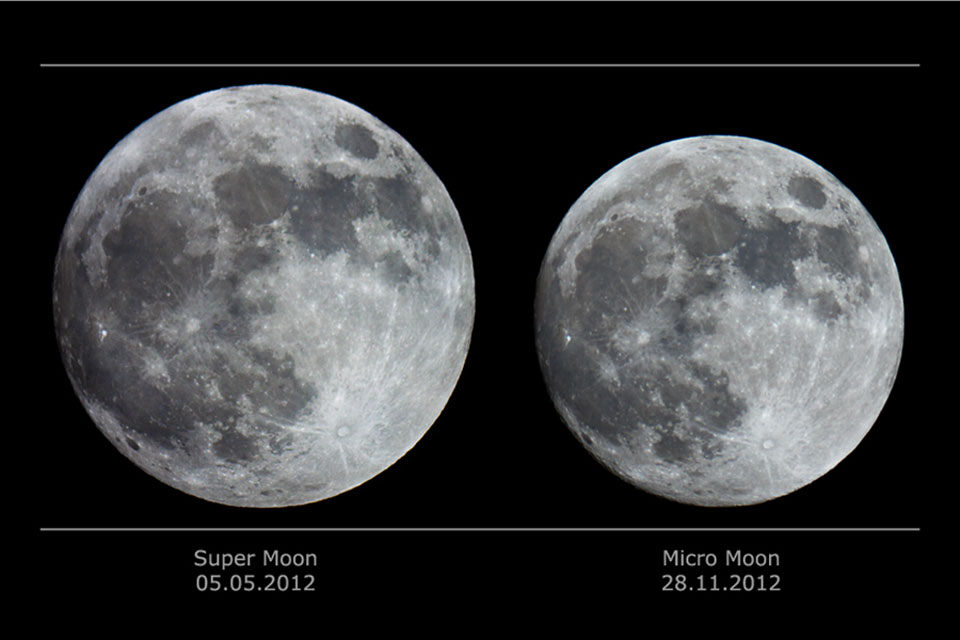 You also do mention the Moon Illusion, where a Moon on the horizon appears larger than it really is. The cause for this is debatable, but it is a known optical illusion. I believe the reason for this effect is that near the horizon, you have points of reference that allow you to judge the size of the moon different than when it is high in the sky, far from other comparison to other objects. You can attempt to view the Super Moon as it is rising so as to take full effect of this illusion, but try to do so in an area that isn't flat and devoid of structures (e.g., don't watch the Moonrise over a body of water).

As for your father, possibly he saw a Super Moon near the horizon which maximized both the optical illusion and the moon's natural size variability. Possibly he his memory also became exaggerated over the years so he remembered a Moon which was larger than it really was.

There is essentially no variation in moon size when viewed from different locations.

The radius of the Earth is about 6500km, but the distance to the moon is about 400000 km: This means that the distance to the moon. and hence its apparent size, varies by less than 2% from place to place. That is not enough to be noticed. There is greater variation due to the non-circular orbit of the moon, which produces "super moons" and "micro moons" at regular intervals.

Images of very large moons over cities are either photoshopped and fake, or taken with a telephoto to make the moon seem large.

Your son is correct. There are no locations on Earth at which the moon is significantly larger in the sky. The Moon is always about ½ degree. That is significantly smaller than a penny held at arm's length; it's about half the size.

Not the answer you're looking for? Browse other questions tagged the-moon night-sky or ask your own question.

2
Why does the Moon sometimes look Yellow?
23
Does the Earth have another moon?
4
Can you see city lights on the Moon from Earth?
8
Can Earth host another natural satellite than the Moon?
2
How big would the Earth look from the Moon?
12
How does the Moon look like from different latitudes of the Earth?
9
How does the Moon move in the “night” sky as seen from the poles?
4
Would one have to be more than halfway to the Oort Cloud for the Sun to appear as bright as the full moon?
16
How many times brighter would full-earth-shine appear to people standing on the moon, than full-moon-shine does to people on earth?