How could a 20 inch space telescope “be able to make out Earth-size planets” orbiting Alpha Centauri?

The NY Times article Telescope to Seek Earthlike Planet in Alpha Centauri System describes a proposed effort to put a telescope into orbit fairly quickly with a narrowly defined purpose - to look for planets in the Alpha Centauri system, which is about 4.37 lightyears away from Earth.

The funding, design, assembly and space deployment fairly quickly is made possible in part by the narrowly defined purpose and the compelling public interest in this particular question.

I got out my box of envelope-backs and did the following. Since there is no air, there's no need for adaptive optics so the standard diffraction limit applies. For an Airy disk:

That makes the airy disk about 0.34 AU at Alpha Centauri. The actual point spread function of a telescope depends not only on the theoretical diffraction of the aperture, but diffraction from secondaries and supports within the aperture, on aberrations due to imperfectly shaped optical surfaces and scatter and haze due to nano-roughness of mirror surfaces. (see below)

Could a 20 inch telescope and associated experiment package be put together quickly that could actually resolve (or "make out" as the article says) an Earth-like planet in the Alpha Centauri system from space? If so, what is it exactly that it could do that can't be done from any existing telescope in orbit or on Earth? 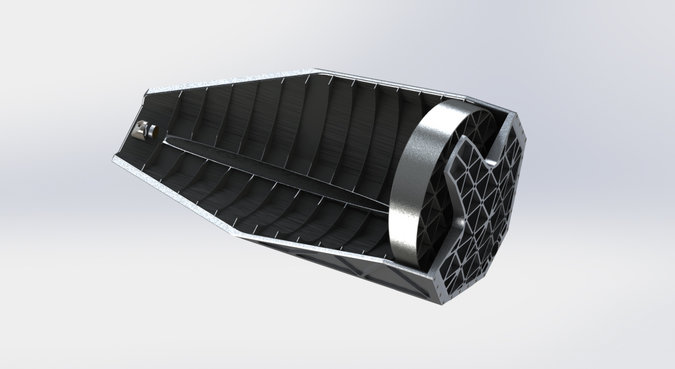 above: "A rendering of the compact exoplanet imaging telescope Project Blue plans to launch into orbit and aim at Alpha Centauri. Credit Project Blue" from here.

It jumps out that the secondary is mounted off-axis, which can have mechanical and optical advantages (e.g. diffraction) but would probably limit the image quality to a narrow field of view, which might be OK for a single-target telescope if there are suitable calibration targets nearby.

A nice discussion of the point spread function of the Hubble space telescope can be found here: 20 years of Hubble Space Telescope optical modeling using Tiny Tim (Krist et al 2011, Proc. of SPIE Vol. 8127 81270J-1), and the reduction of scatter and haze from mirror nano-roughness by using refractive optics (lenses) is addressed by the DRAGONFLY instrument. See also What (actually) is the " deprojected half-light radius" of this almost-all-dark-matter Galaxy?

I'm not familiar with the design of the ProjectBlue telescope, but I think you have answered your own question.

The habitable zones for Alpha Cen A and B, are approximately centred at 1.25au and 0.7au. Both are at a distance of 4.37 light years.

1au at 4.37 light years, subtends an angle of 0.74 arcseconds. If working at blue wavelengths (the aim appears to be to find a pale blue dot, so let's say 400nm), an Airy disk of 0.74 arcsec is achieved with a telescope with a diameter of just 13cm. To stand a chance of resolving planets in the habitable zone, you would need a telescope a little bigger than this.

However, a bigger problem is separating the signal from the star and planets when they are barely resolved. The Airy disc is just the first minimum in the diffraction pattern. If the star is around 10 billion times as bright as the planet (ball park figure) then it would still swamp a planet that was just resolved.

Thus you need to build a bigger telescope to increase the angular resolution. And you need to build superb optics and a coronagraph to stop the light from the star swamping your detector. But this costs more money, the telescope has more mass, needs a bigger launch vehicle etc. So I guess a 50cm telescope is their compromise.

Is it achievable? I don't know. The best telescopes on Earth achieve almost diffraction-limited angular resolution using adaptive optics. However the contrast they can obtain for exoplanet imaging is compromised by the atmosphere to some extent. If you are looking for a "pale blue dot", then this can't be done from the ground because adaptive optics systems do not currently work at such wavelengths.

It is quite possible that Earth-like planets in the habitable zone of Alpha Cen could be discovered from the ground in the next few years using improved radial velocity measurements, but not by imaging.

An interesting question is why this can't be done now with HST? The proposed telescope will spend two years doing this. Even if HST could cut this to months, I am not convinced that detecting a faint smudge around the nearest star has the necessary science pay off to get the time, especially as there is a fair chance of failure. There may not be planets in the habitable zone or there may be sufficient zodiacal dust in the system to make the measurements impossible due to scattered light.

Further research suggests that the coronagraph on the HST ACS camera would only give around 7-8 magnitudes (factors of a thousand) contrast at angular separations of an arcsecond. So nowhere near what is required. This new telescope must have radically improved optics and a more advanced coronagraph.

Not the answer you're looking for? Browse other questions tagged exoplanet space-telescope angular-resolution instruments or ask your own question.

10
What (actually) is the “ deprojected half-light radius” of this almost-all-dark-matter Galaxy?
2
Instead of using flexible mirrors, could software be used for adaptive optics?

15
What percent of planets are in the position that they could be viewed edge-on from Earth? (and thus able to undergo transits)
3
Planets orbiting Alpha Centauri
5
Claim that 30-m class telescopes will have resolution far superior to Hubble: true?
7
Where exactly is the modification that first corrected the spherical aberration in Hubble's primary mirror?
3
Under what situations can an aperture mask improve the resolution of a small/medium amateur telescope? Is this demonstrable mathematically?
2
Does a continuous deformable mirror cause diffuse reflection?