Which measurements have shown that 2014 MU69 is red? (New Horizons' next target)

MU69 is actually the smallest KBO to have its color measured – and scientists have used that data to confirm the object is part of the so-called cold classical region of the Kuiper Belt, which is believed to contain some of the oldest, most prehistoric material in the solar system.

“The reddish color tells us the type of Kuiper Belt object 2014 MU69 is,” said Amanda Zangari, a New Horizons post-doctoral researcher from Southwest Research Institute. “The data confirms that on New Year’s Day 2019, New Horizons will be looking at one of the ancient building blocks of the planets.”

Gizmodo elaborates on the significance of the red color:

Speaking today at the the American Astronomical Society Division for Planetary Sciences (DPS), mission scientists talked about the Pluto flyby, but they also looked ahead to the Kuiper Belt encounter. Recent observations made by the Hubble Space Telescope suggests MU69 is red—if not redder—than Pluto. MU69 is now the smallest KBO to have its color measured, and it’s our first sense of what this mysterious object actually looks like.

The reddish color of MU69, like the iconic red splotches on Pluto and its moon Charon, suggest the presence of tholin, a class of molecules that’s formed through the ultraviolet irradiation of simple organic compounds such as methane and ethane. Tholin doesn’t form naturally on Earth, but it’s abundant on the surface of icy bodies in the outer solar system. Using Hubble, scientists have confirmed that MU69 is part of the “cold classical” region of the Kuiper belt, which contains some of the oldest objects in the Solar System.

How was the "redness" of 2014 MU69 detected? The second link mentions that it is Hubble data - is it just photometric (images through different filters) or is there also spectroscopy?

I'm curious, just how red is it? What exactly are the numerical data that are being interpreted as "redness"? Is this exclusively the assumed visual appearance, or is there excess infrared as well?

Also, I wasn't sure if 2014 MU69 is considered a comet or an asteroid. So far everything I've read just calls it a Kuiper Belt Object (KBO). So I've used both tags. 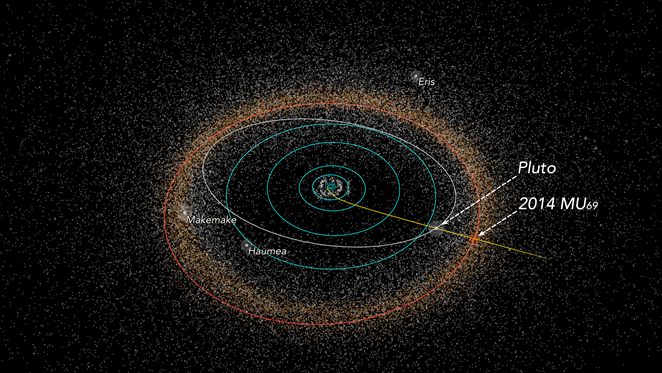 above: graphic from NASA blogs. It looks like they are all red! (joke).

This was a hard one to answer, primarily because of the difficulty in tracking down information.

The Observations of MU69

The extended mission for New Horizons involved adjusting its orbit to do a close fly-by of a Kuiper Belt Object (KBO). The annoying part about this was that they needed to find one first! Ground based observations were unsuccessful due to the faint magnitudes of any potential KBOs and the crowded star field (being that they were looking towards the galactic core). Finally, HST was used and over the course of 194 orbits, between June to September 2014, the entire region of the potentially reachable sky, by New Horizon's designated $130\:\mathrm{m/s}$ delta-v, was scanned using WFC3 instrument and the F350LP filter. Image processing revealed 5 potential candidates. This is all laid out in a paper by the lead of the KBO search, John Spencer. You can choose to view any and all images taken during these observations (since it is in the public domain) by downloading them from Hubble's Legacy Archive. Of course you'll have to do some digging in the 970 total images to find the actual images which contain MU69.

Once the entire region was scanned and a set of candidates were found, follow-up observations were made in late October 2014 of each individual candidate to precisely determine orbital parameters and observational characteristics so as to narrow down which candidate was reachable and presented the most scientific advantage. In this case, the same observing group from New Horizons took the images and once again used Hubble's WFC3 and the F350LP filter. Once again, these images can all be found on Hubble's Legacy Archive. An example of a single image which from this run, containing MU39 (although you'd be hard-pressed to pick it out) can be seen here. Most of this information can be gleaned from the Hubble Legacy Archive and is also described in this paper.

The Minor Planet Catalog (props to AtmosphericPrisonEscape for pointing this out) indicates that further observations of MU69 were taken with the HST in May and July of 2015. I had a bit of trouble tracking these images down, but knowing that John Spencer was the lead in these observations, I went and looked up his 2015 HST proposal which you can read here. With the proper proposal number, I found the set of 15 images during May and July which were taken of MU69. Again, the WFC3 instrument was used with the F350LP filter.

The Color of MU69

In total, we have 38 images of MU69, all taken by John Spencer and his team using the HST's WFC3 instrument and the F350LP filter (that peaks at 5845.871 angstroms). The important point here, and the reason I detailed the observations so much in the previous section, was to determine the exact type of images taken of this KBO, so as to ascertain what science data could have been used to determine color.

Based on everything I've compiled, it appears to me that the statement of MU69 being "red" is a educated guess. Anyone who knows about telescopes will tell you that imaging an object in a single filter is not sufficient to reliably measure aspects such as color. You need at least two filters to determine that because you need to understand how the brightness of said object varies with wavelength.

However, it could be possible to make a guess at the color of this body from a single filter by making a lot of assumptions. This is purely a guess as to what they did, but you can first measure the apparent magnitude of this object in your filter, then, assuming things like size, albedo, distance, etc., you can create a model of this object's spectrum that you'd expect it to have such that it reproduces your observed image. The first paper I linked details how they did inject false KBOs into their images to ensure their KBO finding algorithms worked which indicates they had some basic ability to model KBO images in their data. If your model can reproduce the observations, you can use that model as a basis for what your KBO is likely like and from that you can say that it appears "red". Based on experience with KBOs and in partiuclar pluto, we expect they might be red and that the redness corresponds to tholin, a common, red chemical found on KBOs, so the fact that they believe it to be read is not surprising.

While the answer by @zephyr is extensive, unresolved images of a very distant Kuiper belt object distant body over a short arc of it's orbit through a single filter can not be used to calculate a color. Further, contrary to the claim in that answer, there are indeed a series of measurements alternating between visible and infrared filters!

The Sci-News article Scientists Determine Color of Kuiper Belt Objects JR1 and MU69 describes the color measurement and shows the image of 2014 MU69. 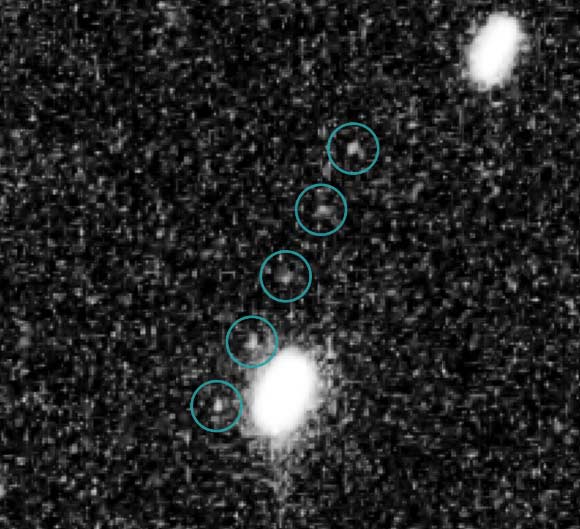 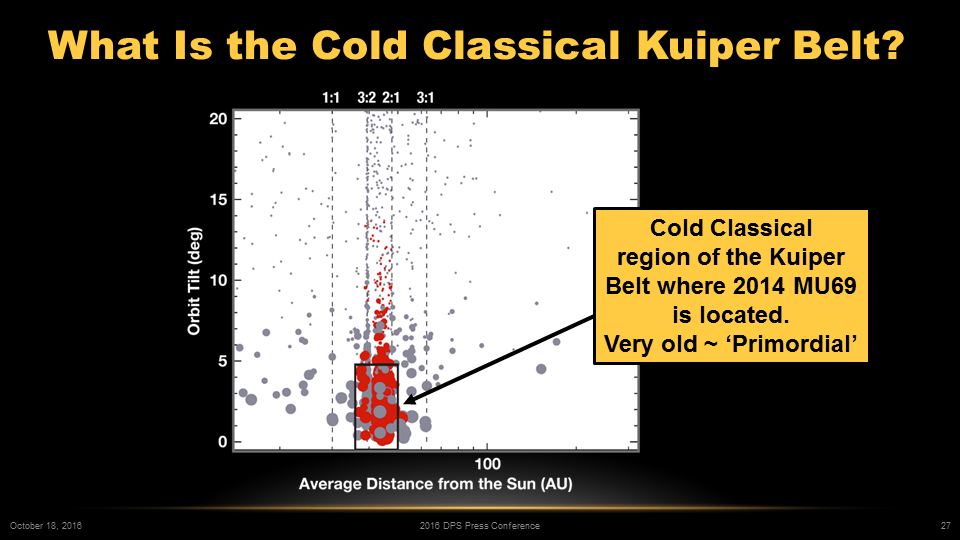 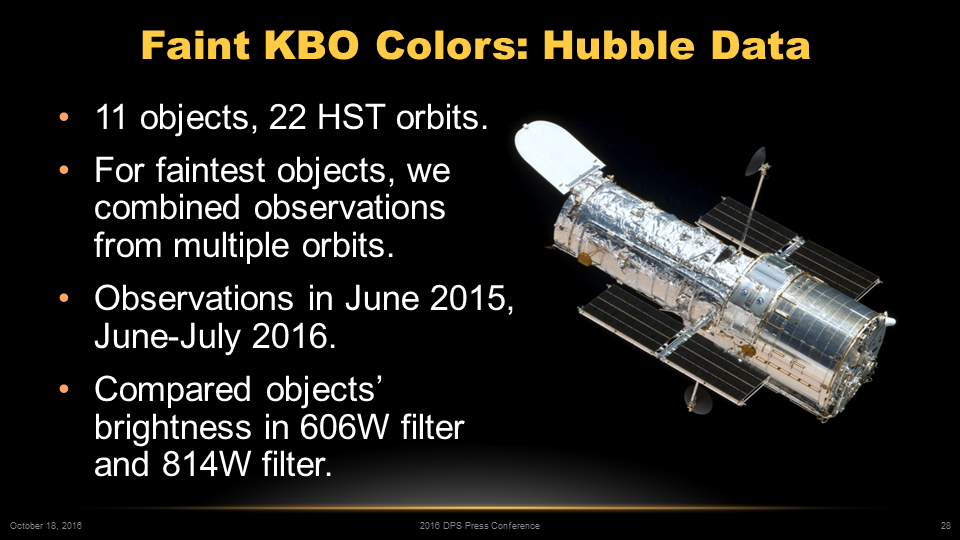 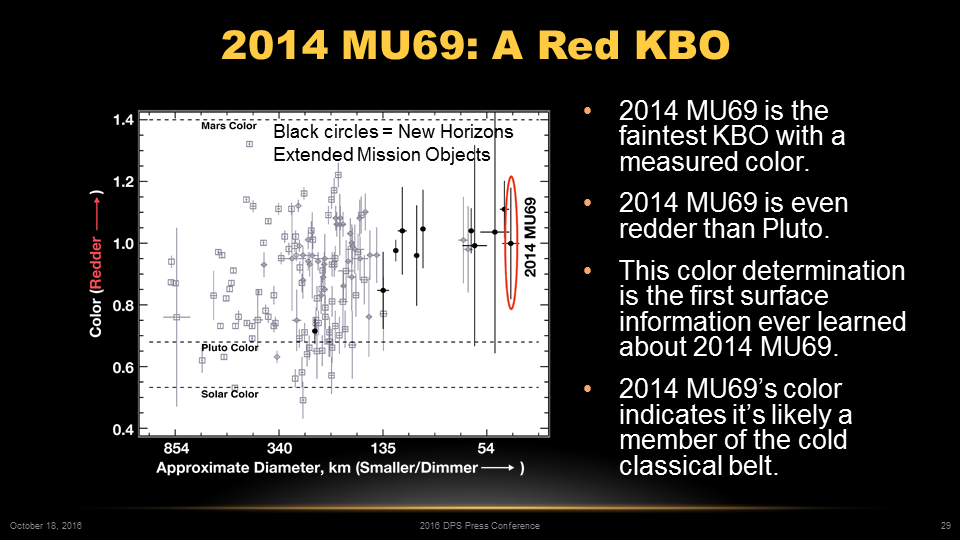 Fortuitously the New Horizons (NH) spacecraft will fly through this part of the Kuiper Belt after its encounter with the Pluto system providing the opportunity for observing as many as 10 objects from long range. Unfortunately, the NH observations will be panchromatic. We propose to obtain colors and to search for binary companions to 8 of these objects and the NH encounter Kuiper Belt object (KBO; 2 were observed with HST in previous cycles), so that we can link the single filter, and higher resolution, spacecraft data from the distant targets to the color and binary data available in the literature.

The tabulated system throughputs for the aperture/filter combinations are plotted below. Clearly two color measurements are made and the "redness" is established based on green-red vs NIR brightness. In the last slide shown above (#6 from the press release slides a "redness" scale is devised, with 2014 MU69 falling roughly half-way between Pluto and Mars! 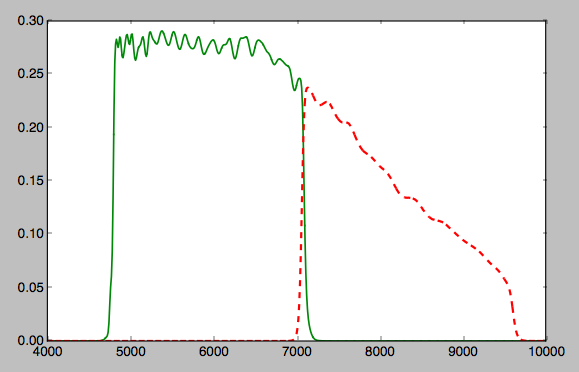 Not the answer you're looking for? Browse other questions tagged asteroids comets spectra kuiper-belt or ask your own question.

3
What is the cause of all of these sharp, concentric rings around bright stars in this HST image?
1
Will JWST have fewer observing sessions of much longer duration compared to Hubble?

9
What is the farthest reported distance from observer from which a solar system body has occulted a star?
1
Are there clouds/clusters of gas in space that have red and blue color adjescent to one another?
7
What observations will be done during the New Horizons flyby of Ultima Thule?
1
Does the KBO 2014-MU69 have two numbers and entries in asteroid databases? How did it get promoted to Major Body designation?
3
How many Kuiper Belt objects have moons? How do we know this?