What is precipitable water vapor in millimeter-wave radioastronomy and how is it measured?

Looking through ALMA on-line documentation and articles, the quantity PWV (precipitable water vapor) is a central theme. I have two linked questions.

I usually see numbers of the order of 5 millimeter to 10 millimeters for very high altitude locations like Atacama. I assume this is the column-integrated amount, expressed in units of liquid, is that right?

The reason it is called "precipitable" water vapor (PWV) is that the water vapor is in the form of gaseous vapor which may further condense into cloud form and then into actual precipitation i.e. rain (which often overwhelm the sensors). It is often also called total column water vapor which more accurately reflects what is being measured i.e. a height of the equivalent column of liquid water, hence the measurement in mm. The American Meteorological Society glossary entry on precipitable water (or precipitable water vapor) similarly defines it as:

The total atmospheric water vapor contained in a vertical column of unit cross-sectional area extending between any two specified levels, commonly expressed in terms of the height to which that water substance would stand if completely condensed and collected in a vessel of the same unit cross section. The total precipitable water is that contained in a column of unit cross section extending all of the way from the earth's surface to the "top" of the atmosphere.

For very high and dry sites e.g. the Atacama, Antarctica will have less than 5mm PWV, sea level sites will be 50+mm of PWV. ESO's Cerro Paranel observing site (home of the VLT), has median PWV of 2.5mm (see e.g. the histograms in this ASM 2016-2018 report). The Atacama Pathfinder EXperiment (APEX) sub-mm telescope on Chajnantor (also home to the ALMA array) has had a weather station for several years and for example the APEX 2017 weather statistics show that the APEX site (~5100m altitude) had a PWV <1.5mm approx. 67% of the time.

There are several ways to measure the PWV. The Earth orbiting satellites such as the AIRS and MODIS instruments on NASA's Aqua and Terra satellites measure the radiance in several IR wavebands (typically from approx. 0.5 to 15 um). Some of these bands are essentially dominated by water absorption bands so performing differences between bands containing water and without water will give a measure of the water column.

Microwave radiometers at 210 or 225 GHz are traditionally what have been used to measure PWV, with more modern radiometers shifting to the 350um (856 GHz) window/band. An example is the one at the Caltech Submillimeter Observatory on Mauna Kea described in this link at Gemini Observatory. They work similarly by measuring the depth of the absorption by the water vapor in the molecular lines/bands. More water vapor produces deeper lines with more optical depth. More details are in this (freely available) paper by Radford which shows the effect of increasing PWV on the absorption in the sub-mm, the amount of PWV at various sites and more info on the measurement.

Finally this can also be done by dual frequency GPS receivers at the L1 (1575 MHz) and L2 (1224 MHz) and measuring the path length excess through the atmosphere above what is caused by the receiver-satellite distance alone. By using two frequencies, you can remove the effect of the variable ionosphere on the path length. The remaining zenith path distance breaks down into two parts, a hydrostatic or "dry" component which can be easily estimated using e.g. the Saastamoinen model, leaving the "wet" component caused by water vapour. Once this is corrected to the zenith, this gives a measure of the PWV.

As defined quite clearly, with equations, here

The total atmospheric water vapor contained in a vertical column of unit cross-sectional area extending between any two specified levels, commonly expressed in terms of the height to which that water substance would stand if completely condensed and collected in a vessel of the same unit cross section.

There's, for example, an ALMA paper which discusses measurements and comparison with meteorological stations. 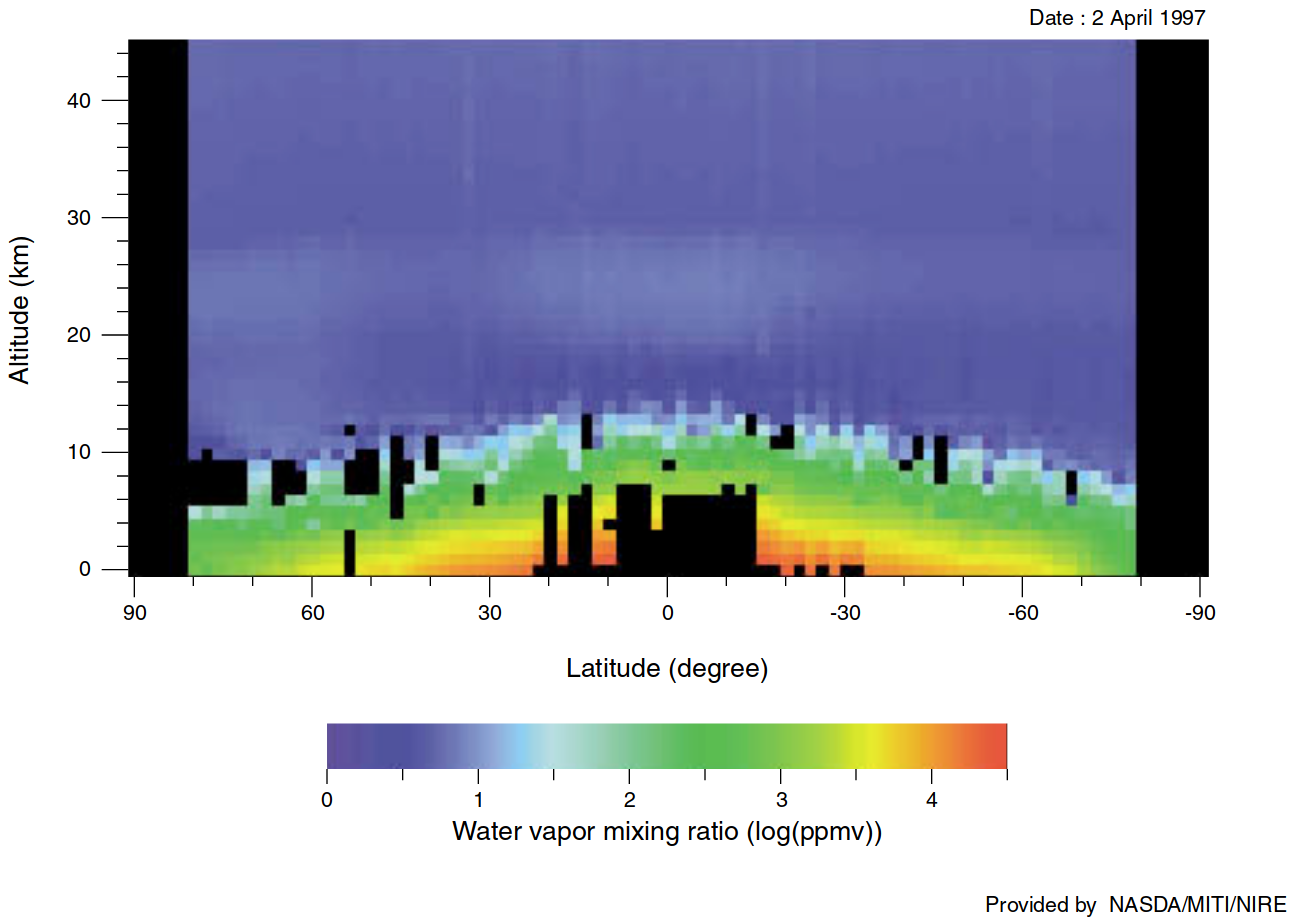 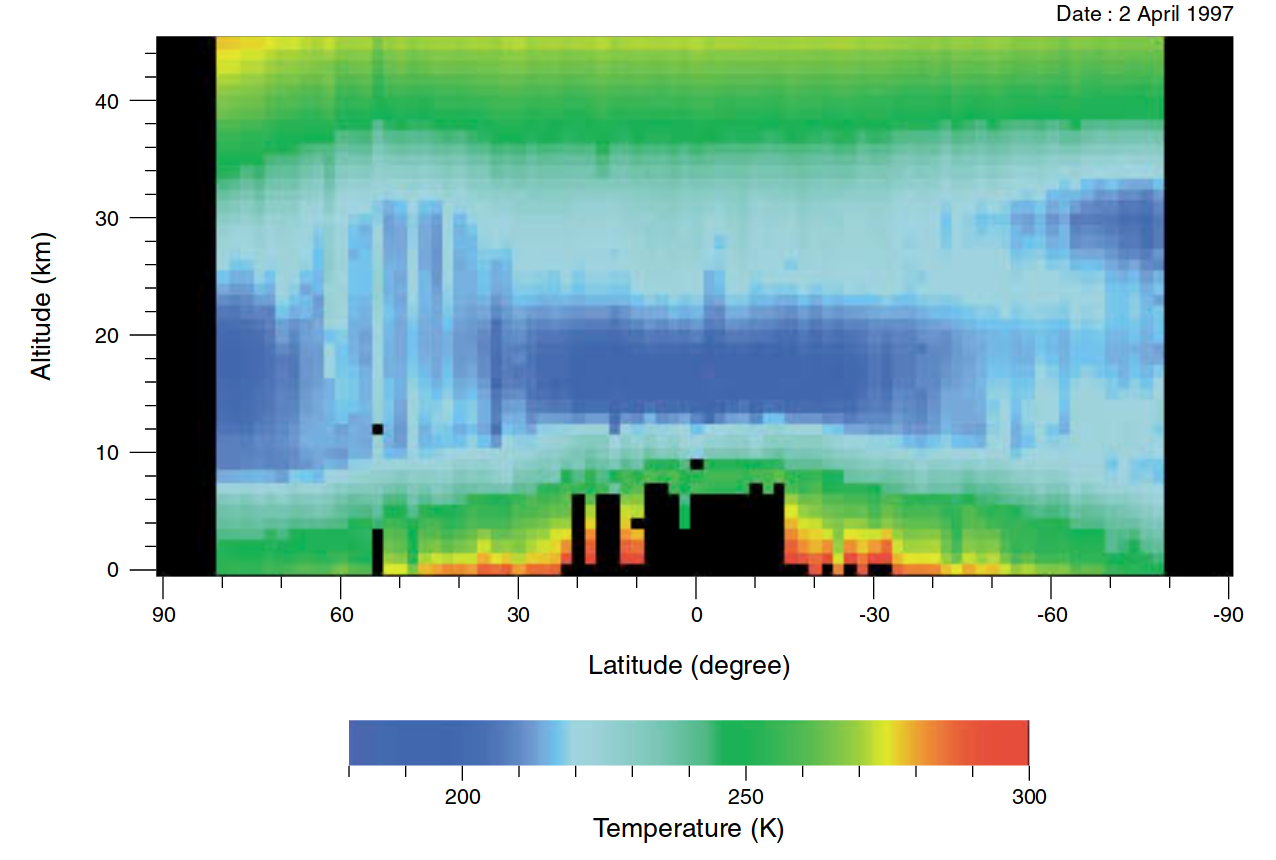 The International Space Station travels in orbit around Earth at a speed of roughly 17,150 miles per hour (that's about 5 miles per second!). This means that the Space Station orbits Earth (and sees a sunrise) once every 92 minutes.

Its possible to find the ISS using the FREE SkyView on your phone and find the space station and perhaps study the image.

Its interesting to think about humidity measurements that we see from a weather website and compare these to what you actually see. It maybe that the ideal place for a telescope is just above the tree line? (for people who don't like numbers) However, there are some really nice urban telescopes and hopefully in the future we will have more telescopes in nice cities even if not all the nights are clear.

(the Indian and Japanese papers both seem to show that the water vapor disappears at about 10-12 KM)? However, some of the biggest telescopes in the world are being placed only about ~3000 meters up. Its sometimes nice to place telescopes in urban areas where we can get to it. Especially when the vapor doesn't really disappear until 10 KM which is way too high up anyway?!?!

Why water vapor is more "linear" is still one of those cosmic mysteries... I liked the x^2 equation the other person posted.

3
What is meant by “there is no refraction at the zenith”?
1
Why did it take five years to “figure out” how to use astrometric calibration sources to deblur LOFAR images?
1
Have caged molecules ever been observed in space?

3
What is meant by Electronic Beam Steering and how is it achieved?
1
How significant and accessible is modern Chinese astronomy?
5
What types of signals is SETI (and other such efforts) looking for?
1
What are the Similarities and Differences between ALMA and FAST?
4
Why do Seyfert Galaxies emit less energy than Quasars and Blazars, and how is the emitted energy measured?
7
How large does refraction become in radioastronomy?
3
How far can we detect lightning in radioastronomy?
4
What does “unremarkable transverse peculiar velocity” mean exactly, and how is it calculated here?
4
What exactly are “H30α and He30α images”? (ALMA)