What are the dark spots in this Hubble image of the Crab Nebula?

I recently ran into this NASA Hubble image of the Crab Nebula in this article talking about its core. What I am interested to know though is: what are these round dark spots appearing in the image (upper right, lower center and lower left for example)? "Holes" in the Nebula? Objects in front of the Nebula, visible against its illuminated gas? Blemishes in Hubbles lens(es)?

CLARIFICATION: I am asking about the small pixel like dots. Not the large "holes" from this question. 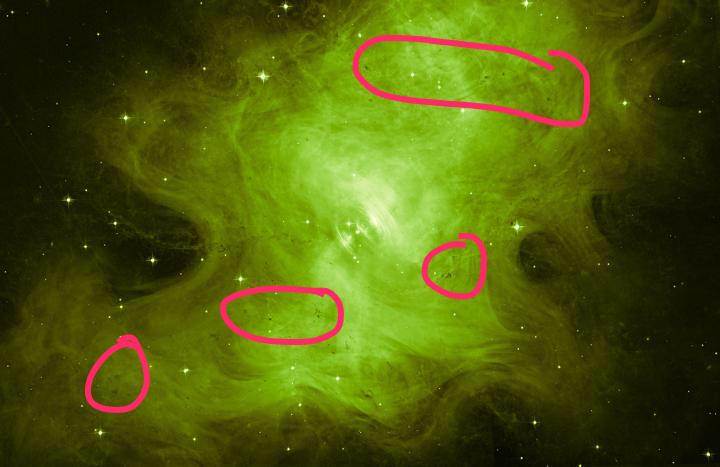 They are most likely dense clumps of dust absorbing whatever wavelength of light this image was captured in. It's hard to say just how big they are as I can't find any scale for this image, but generally nebulae are lightyears massive, with the Crab Nebula according to wiki being 11 light years. So whatever they are, they're still pretty big.

Edit: Just look at the horizontal band of darker lumps, you can tell that they are between us and the brighter region. The band would be of the same material as the bright green cloud, just less energised as it is further away from the star.

Not the answer you're looking for? Browse other questions tagged hubble-telescope nebula or ask your own question.

14
What are the large round dark "holes" in this NASA Hubble image of the Crab Nebula?

1
What is meant by "short lived" in the duration of a planetary nebula?
14
What are the large round dark "holes" in this NASA Hubble image of the Crab Nebula?
1
Are there more images with different filters available for the April 6 Hubble image of Jupiter?
0
Is this image captured by the Hubble Telescope an original image?
2
How close to Earth were the asteroids moving through this Hubble composite image?
16
What is the "lost light" in this unusual Hubble Deep Sky image?
2
The star that died and became the Crab Nebula and Crab Pulsar?
2
Are the bright dots in this image individual stars?