NASA pays for several telescopes around the planet to scan the skies on a nightly basis, looking for these objects. "The NASA surveys are finding something like at least five asteroids every night," says astronomer Paul Chodas of JPL.

Which telescopes are the "several telescopes around the planet to scan the skies on a nightly basis" that NASA pays?

Also, is it really roughly five new actual asteroids identified per day (almost 2,000 per year), or is that 5 objects detected, and only some small fraction turn out to actually be unique, new objects?

Given that the article seems to be referring to NASA's Near Earth Object Program, it appears that there are five subprograms scanning the skies:

According to JPL, CSS and Pan-STARRS are responsible for 90% of new Near Earth Object (NEO) discoveries. LINEAR is responsible for detecting objects one kilometer in diameter or greater, while NEOWISE provides additional measurements from previous WISE targets, so it isn't making new detections, merely follow-up observations.

NASA's statistics show that over 15,000 Near-Earth Asteroids (NEAs) have been discovered so far, from all programs scanning the sky. In each of the past three years, about 1,500 NEAs have been discovered, most by the five programs listed above. That's roughly consistent with the five-per-day claim. However, it's not yet near 2,000 per year. 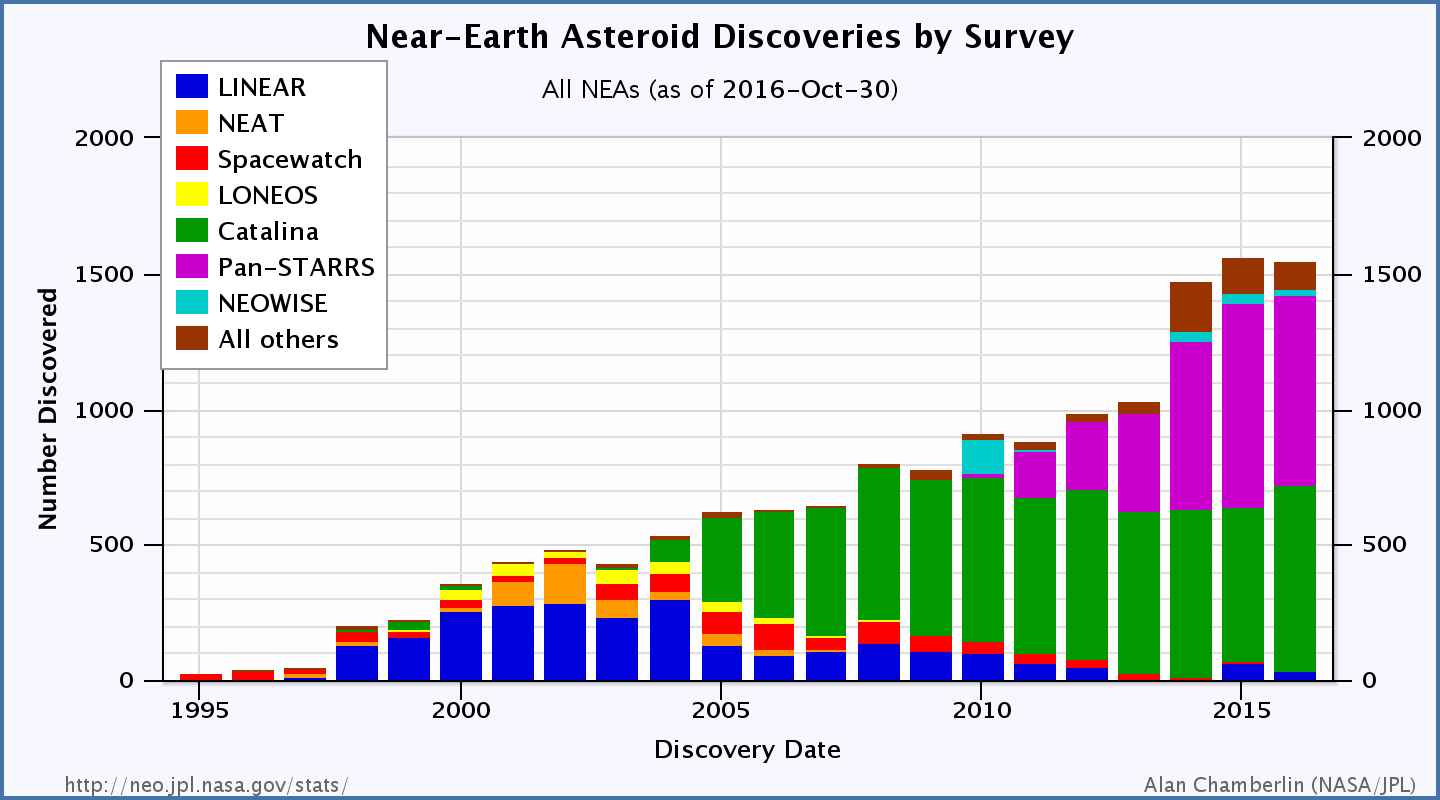 Some days there are 10 or more Minor Planet Electronic Circulars announcing new asteroid discoveries or lost asteroid recoveries. The October 30 MPECs included a follow-up observation of 2016 UR36, the same object mentioned in the NPR story. With an arc of only a few days, its orbit remains highly uncertain.

Not the answer you're looking for? Browse other questions tagged asteroids observatory nasa or ask your own question.

11
How was Earth's “quasi-satellite” 2016 HO3 “first spotted” and it's orbit determined?
8
Does Jupiter help to protect the Earth against comets/asteroids impacts?
5
Which measurements have shown that 2014 MU69 is red? (New Horizons' next target)
0
At what annual rate are new exoplanets being recognized? How does it compare to new asteroids?
0
Does the Zwicky Transient Facility only run when triggered by a cell phone?