Which constellations are straight up and straight down?

Pretend you're in our galaxy near Earth and you're standing upright wrt the flat galactic disk.

If you look directly towards the center of the galaxy, that's Sagittarius. If you swivel your head and look directly away from the center, I believe that's around Auriga.

(If I'm not mistaken, could be wrong, this is equivalent to asking about... 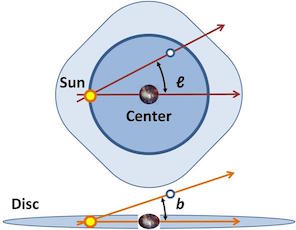 ... galactic coordinates of longitude zero, latitude 90° (up overhead) and -90° (down through your feet).

Crap: I've just realized the answer is given on that Wikipedia page!

Looking up from here: Coma Berenices

Looking down from here: Sculptor

Hope this helps someone googling.

Not the answer you're looking for? Browse other questions tagged coordinate constellations or ask your own question.