To what degree of precision can Konstantin Batygin make that kind of measurement? Has it been backed up by other physicists with a degree of certainty?

He also says that they think it's near it's aphelion "because it hasn't been seen, so it's far away", not because of the above period coincidence, why can't they say where it is more convincingly?

Does that mean that they have very strong mathematical evidence for Planet Nine?

I did a little digging and I found this article.

It's worth noting that the initial publication wasn't about resonances but the fact that all 6 objects came from the same side of the sky, from somewhat similar directions, which, given that they were the 6 most distant at the time, is statistically unusual and it was both similar direction and similar inclination to the plane, so the statistical improbability was high enough to investigate. Orbital resonance wasn't the primary argument, it was tacked on later as a secondary.

“For a resonance to be dynamically meaningful in the outer Solar System, you need one of the objects to have enough mass to have a reasonably strong gravitational effect on the other,” said the research team. “The extreme Kuiper belt objects aren’t really massive enough to be in resonances with each other, but the fact that their orbital periods fall along simple ratios might mean that they each are in resonance with a massive, unseen object.”

But what is perhaps most exciting is that their findings could help to narrow the range of Planet 9’s possible location. Since each orbital resonance provides a geometric relationship between the bodies involved, the resonant configurations of these KBOs can help point astronomers to the right spot in our Solar System to find it.

This chart below also has a typo, it should be 2010 GB174 not 2012 GB174. I guess nobody proofreads letter/number assignments. Correct names will help if anyone wants to run the numbers see how see how close the resonances come to each other. 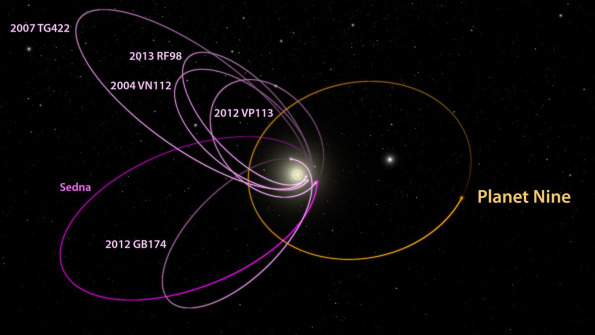 As to the degree of statistical certainty? If you're a good enough statistician, you can run the numbers. 3/2, it seems to me, would be the most common resonance based on Jupiter's abundant Hildas and the Plutinos and only 1 of the 5 potentially resonant objects has a 3/2, but 3/2 is also very far from the sun and hardest to detect, so that's not a deal breaker.

I'd guess that the degree of certainty from these orbital resonances is OK but not great - but that's entirely a guess. I also don't know enough about astronomy to know how close numbers have to be to provide some evidence of orbital resonance. Jupiter's resonant moons, for example, if you check their orbits, are off by 1 or 2 percentage points from each other.

Not the answer you're looking for? Browse other questions tagged planet orbit astrophysics asteroids comets .

1
How can they tell no asteriods will hit earth in the next hundreds years?
6
What good evidence exists for the 9th planet as spoken of by Caltech?
7
Is Planet Nine shepherding the Kuiper Belt?
3
Have any co-orbital exoplanet pairs been discovered (and not subsequently retracted)?
8
What is the shape (along the plane, not up-down) of stellar orbits in flat spiral galaxies
3
Kuiper belt planet formation
5
Could stellar occultations be used to survey Kuiper belt objects?
2
Is Jupiter really shepherding the main belt, and Neptune the Kuiper belt?
0
What are the minimum variables that determines the orbital velocity of a planet?