Why can't I see Mars clearly?

I just bought my first telescope - a Celestron CDC 1100. It came with a 40mm lens so with a primary focal length of 2800mm the power should be 70x.

My problem is that I've looked at Sirius and Mars and they look clearer to my naked eye than with my telescope.

I am able to focus from way out so I can see the 'blind spot' of the secondary mirror, go through 'focused' and then continue moving the mirror in the same direction until I again see the blind spot. So I know I'm focusing through when it should be 'good'. But, like I said, what I see is a relatively unfocused spot of light that is clearer and steadier with my naked eye.

Admittedly, my 'seeing conditions' aren't very good since I am looking through my window in a suburban neighborhood where light pollution is pretty bad. That being said, I still see Mars and Sirius quite brightly - it's just that they never come into clear focus - nor are they any larger than when I look using my eyes. And when I move my eye around the eyepiece I see streaks of light in different directions originating from the target.

There are many stars to be seen, though they are just pinpricks as I would expect given the seeing conditions. What I mean to say is that I cannot see all those stars with my naked eye but can see tens or hundreds more looking through the scope so I know it is gathering plenty of light as an 11" scope should.

I tried both with and without the diagonal with no discernable difference.

I have not collimated but supposedly it was collimated before leaving the factory and I would hope that even if it were off a bit from shipping I would still be able to see a sizable though fuzzy image of Mars instead of just a small speck of orangish light.

Any thoughts as to what I may have done wrong or what may be causing this lack of clarity?

You're experiencing a few issues all of which have one solution. Take the Scope outside. Let it acclimate to the ambient air tempurature, and then try looking.

The 1st issue is the mirror needs to be the same temp as the air you're observing in. Since you are indoors you have a very warm optical path this causes distortion and trouble focusing.

2: Because you're looking through a piece of window glass (or more if it's a multipane window) you're introducing distortions that way. It's no wonder you can't reach focus.

Light pollution won't really affect Mars or the other planets too much, so that's not your worry.

Why are you observing from inside anyway?

Light pollution doesn't disturb the focussing, just the contrast. But non-uniform refraction of the window can.

So try to open the window, if you can, or take a try outside.

If you are asking 'Why is Mars so small in my Field of View, I thought it would be larger' then you need to consider how big you can expect to see it for various eyepieces.

Mars will therefore cover 0.0047 of the field of view. That isn't big. 0.5% of the diameter of what you see in the eyepiece. So, it will be barely more than a pin-prick.

If you had a Celestron 7.5mm Plossl, for a magnification of 373x, then the true field of view for that combination with your telescope would be 0.14 degrees, or 504 arcsec. Then Mars will cover 0.025 of the field of view, or 2.5% of the diameter of the view. So if you mentally divide the field into 10 equally sized stripes or rings, Mars will cover about a quarter of one of those imaginary divisions. Still not big, but a lot bigger than what you are currently seeing.

You could try going bigger using a shorter focal length eyepiece, but 400x is about the usable limit. Sorry, you aren't going to get an eye-piece filling view of Mars, not unless you're riding on the Mars Global Surveyor.

To use the equipment to get a picture of Mars that will impress your friends, you might try getting a camera with a small chip with a nice fine pixel size to record video frames. These you then 'stack' using software to remove the noise that comes from various sources including atmospheric refraction variations, and you end up with an image that is often quite impressive, and orders of magnitude better than what you can perceive with the naked eye.

Regarding the fact of using the scope indoors: it's understandable, but silly. Unless you live inside a clean room (like those ones in labs), your scope will get dirty anyway, because an average person's room is not free of dust and particles. In fact, it might be even worse, because you won't move the scope frequently and the dust is definitely going to build up. Besides, cleaning a scope is not that difficult, as long as you have the patience to put everything back together later, and then doing the re-collimation. Also, the dust grains on the mirrors are not big enough to depreciate the image, so you might as well just not bother with them. I can guarantee to you that the only dust that cause Astronomers trouble is the dust up there, in space, and rarely this one down here.

Other things to check: collimation and quality of the optics. Things can get bumpy during transport, so it is possible that the mirrors got misaligned or maybe you got damaged optics (or just poor quality ones). A collimation problem can be easily identified: you'll get comet-like distortions (tails) in stars and planets. Poor quality optics is problematic, because it is generally the item that buyers do not check, so the manufacturer may shove the cheapest optics elements in the package to get a lower price tag. So, if that's the problem, you might want a replacement, or new (better) elements.

Much like Jeremy has answered, Mars will appear just larger than a point, you will be able to discern a disk, however with minimal detail. For an overview of the disk you will see, I two versions of a virtual telescope in Wolfram Mathemtica; one with an orange disk and another using models of the planets. Anyway, using the orange disk variant, I input the CPC1100 details and the resulting view will match my output. 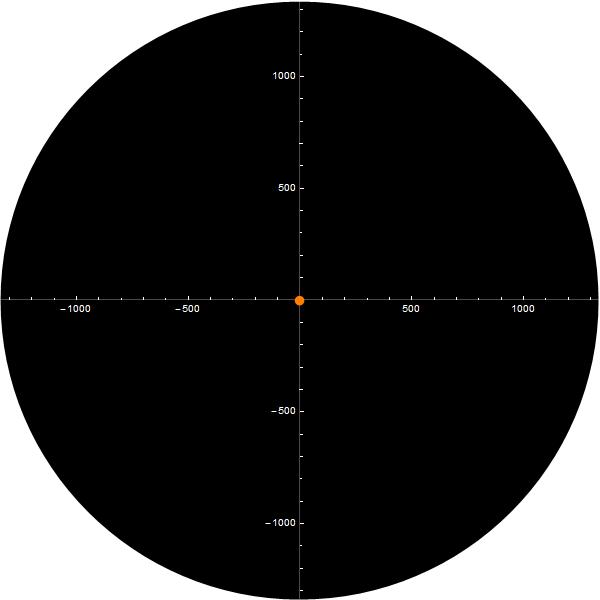 You telescope has a maximum useful magnification of 560x (2x telescope aperture) however it is airy disk limited to 481.2x. This means that a star will only appear 'point like' up to 481.2x magnification, above that the disk becomes increasingly blurrier to a point where you can no longer discern a point it appears as a cloud.

As a point of reference to the size of Mars using different equipment; 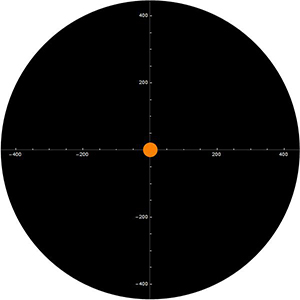 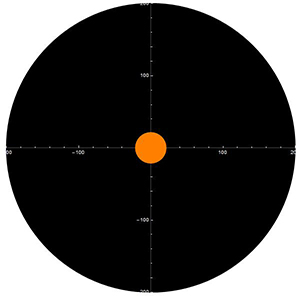 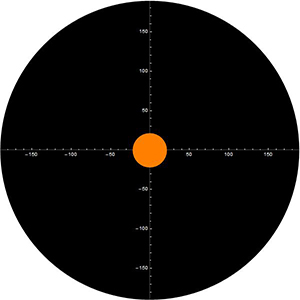 On another note apart from what you 'should see', is what you can see. Aperture plays the ONLY role in telescope design which defines your clarity. The primary mirror diameter is a light bucket, a larger mirror is a higher image resolution (more discernible features/clearer image). Magnification also plays a role in clarity, each time you increase the magnification by 2x, you reduce the brightness by 4x; increase by 3x, you reduce brightness by 9x. So brightness is directly proportional to magnification. The highest possible brightness you can achieve, is your lowest possible magnification. How aperture works by collecting more light; allows a brighter image for a larger telescope than a smaller one at the same magnification, which is why so many people get 'aperture fever' and think big is best (for clarity yes). Your focal length is the determining factor for image size, meaning a 20inch telescope won't see an object larger than a 5inch at the same focal length.

You are correct in saying that both Mars and Sirius appear brighter with the naked eye than your lowest magnification; referring above, if your pupil diameter is 7mm, then the object appears at a factor of hundreds of times dimmer through your telescope.

I can provide material to calculate your own virtual telescope, it's parameters and viewing expectations if you are an avid user of Mathematica. Hope this has cleared up some information for you.

Not the answer you're looking for? Browse other questions tagged solar-system amateur-observing telescope .

6
Which planets, nebula, and other objects can be seen using Celestron Astromaster 130EQ
6
What should I expect to see with my telescope with what EP's?
1
Planetary observations: what to expect from the Powerseeker 50AZ?
4
How many galaxies can be seen in a given patch of sky
3
Struggling to use my new telescope
2
Finding Jupiter, Saturn
4
Trying to use Canon 60D DSLR with Skywatcher 130P. Can't focus image
6
Is the Object in this Photo Mars?
1
How much of M87 can i see with an amateur telescope?
5
How could I see Andromeda as large as in this picture?