Is it possible to extend the life of a star?

Is it true that when a star 'runs out' of its fuel, it hasn't really used up all its hydrogen, it still has hydrogen left, but the hydrogen is not at its center where the fusion happens. If something crashed into it rearranging its content a bit, could its life be extended?

If something crashed into it rearranging its content a bit, could its life be extended?

Yes! This is precisely what we think causes the creation of blue stragglers.

When we look at a cluster of stars, we expect them to all be of roughly the same age. This is usually borne out by observations. Because larger stars evolve faster, the age of a cluster can then be roughly determined by working out the mass of the most massive star still on the main sequence (i.e. still burning hydrogen in the core). We call this the main-sequence turnoff.

But in some clusters, we see and handful of stars that are more massive, but still on the main sequence, even though all the evidence says they should have already evolved into giants and other more-evolved objects. The consensus view is that these stars are at the very least interacting with binary companions, and many are thought to be merger products. i.e. something left over from two stars merging into one. Either two companions in a binary have orbited so close that they've become one star, or two stars have simply collided (which is quite possible in the dense cores of clusters). Depending on what types of star collide, you can basically get a new star where everything is mixed up again, allowing the star to be "born again".

The outer shell of the star contains still a lot of hydrogen, after running out of fuel.

Elements other than hydrogen are denser than hydrogen. This makes it difficult to get hydrogen to the core of a star, or to the region of hydrogen-burning at least, after the core has been burnt to helium or heavier elements.

But the life of a star can be extended in some way, e.g. by adding hydrogen to a white dwarf. This can trigger burning of carbon with a supernova Ia as result.

Stars actually do this on their own, to an extent. The material inside a star (in some layers) does convect, and at certain points in the star's life, the material in the core can actually rise up and mix with the rest of the star. This might replenish some H and He in the core, but the main effect that can be observed is that the fusion products become visible at the surface.

Also, the size and location of the convective layers depends very much on stellar size - in a red dwarf the convective zone is most of the star. That's one reason red dwarf stars live so long - they continually "recycle" their available Hydrogen.

When stars transition from the main sequence core Hydrogen burning to core Helium burning they can experience Hydrogen shell burning. 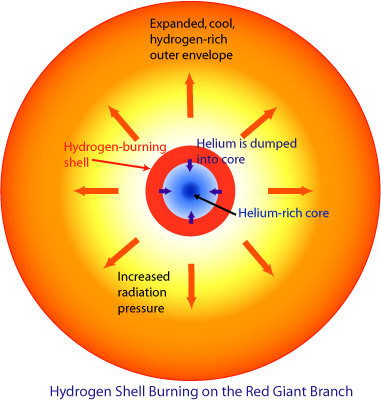 However, when you burn the Hydrogen in the shell to Helium, it will fall on the core creating a hotter core where the radiation pressure from the Helium burning core will push the Hydrogen further out into the outer envelope. From here you can get a Helium flash which is the cause of Horizontal Branch stars.

If you were able to somehow force more Hydrogen to shell burn then you could possibly extend the life for a short while, though the lifetimes post main sequence are much shorter < 1 Gyr compared to the lifetimes on the main sequence.

9
Is there a flaw with the newer purposes and correlations attributed to the HR diagram? (And would a third axis of mass correct the enclosed flaw?)
4
How bright can white dwarf stars glow as they accrete matter?
6
Why is the core of a gas giant supported by electron degeneracy pressure instead of nuclear fusion?
13
Fate of Jupiter when our sun dies
17
When a star reaches the red giant phase, why does it become more opaque?
2
What are the possible star fuels?
9
How much more life could the Sun acquire via star lifting?
0
Is it possible for stars to not begin fusing hydrogen at all?