How is the mass and semimajor axis of a directly imaged exoplanet found?

I can't find information on this for the life of me.

How do astronomers approximate the mass and semimajor axis of a directly imaged exoplanet? Would several photos need to be taken to find the period and find with Kepler's third law or can it be inferred through the temperature of the planet (or another method)? Also if you have any sources of this that would be great.

For the former, you need a model for how the luminosity of a giant exoplanet (which all the directly imaged ones are) evolves with time, as a function of mass, and an estimate of the age. One simply looks up what mass of planet would have cooled to its current luminosity at the age of the star that hosts the exoplanet. The luminosity measurement needs an accurate distance to the system and benefits from observations at multiple wavelengths. Realistically, these masses are uncertain by a factor of two at least, because of cooling model uncertainties.

Here is an example of this applied to various directly imaged exoplanets. Evolutionary tracks for various masses are shown in the luminosity versus age plane. Note the size of the age error bars and that is before you factor in uncertainty in the models (two flavours, "hot start" and "cold start" are shown as solid and dashed lines respectively - from Bonnefoy et al. 2013). 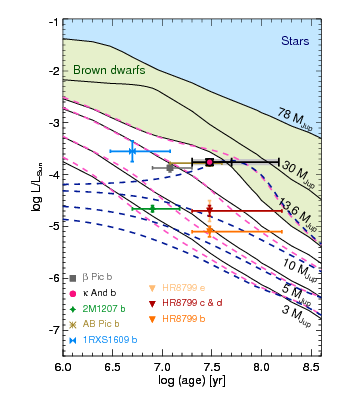 The semi-major axis can only be estimated (a lower limit), from a single image, and only then if you have a good distance to the star/planet system. The angular separation is converted to a projected linear separation.

A perfect example of the above is the estimate of the mass and orbit for the exoplanet GJ 504b (Kuzuhara et al. 2013).

With more images spread over an appreciable fraction of the planet's period one can be more accurate. The projection of the elliptical orbit can be mapped, yielding the orbital inclination and thus a better semi-major axis measurement. The orbital period can then also be roughly estimated and checked for consistency with Kepler's third law and an estimate of the stellar mass. Note though that currently imaged planets have orbital periods of at least decades.

Wang et al. (2016) give an example of this approach for beta Pic b. A dozen precise images constrain the semi-major axis to a few percent and give the total system (star plus planet, but dominated by the star) mass.

I want to expand on Rob Jeffries answer:
As pointed out in the comments you need to observe a planet over time as it continues in its orbit.
The reason why you cannot take a simple image to estimate $a$, is that although you observe the planet somewhere in its orbit, this orbit could be elliptical, and thus the distance where you see it would tell you nothing.
However observations over time are already possible and have been done, as in the example of the four-planet HR8799 system. Here I just wanna leave that result from Pueyo et al. 2015 (fig. 9) with their best-fit orbits:

In this article, they collected previous measurments of the planetary positions in HR8799, added some of their own and fitted this data with Kepler ellipses. The existence of those orbits additionally constrains the masses a little bit (they only know for all $m_p < 13 m_{jupiter}$), so that's not too much of a constraint) as the system would have already destabilized itself after the age of $\sim 30 Myr$ if they were higher. Later destabilization is of course still possible.
Measurments of this type rely on very precise astrometry, which is the determinaton of an object's position. This may sound easier to do than it actually is. In the above figure the error bars of each measurment used are also given, and to suppress them to small values and at the same time make them accurate is the challenge here. One can see that the errors are of the order of 10 milliarcseconds. From the ground this precision is at the moment at the limit of what we can do, better will only Gaia be with errors down to 10-100 microarcseconds.
But Gaia doesn't have the angular resolution for such systems which has slightly worse than 0.1 arcseconds angular resolution .