What factors influence the Widmanstätten pattern in iron meteorites?

The cores of iron meteorites exhibit beautiful Widmanstätten patterns, as shown below in the Alvord meteorite (photo by Jim H): 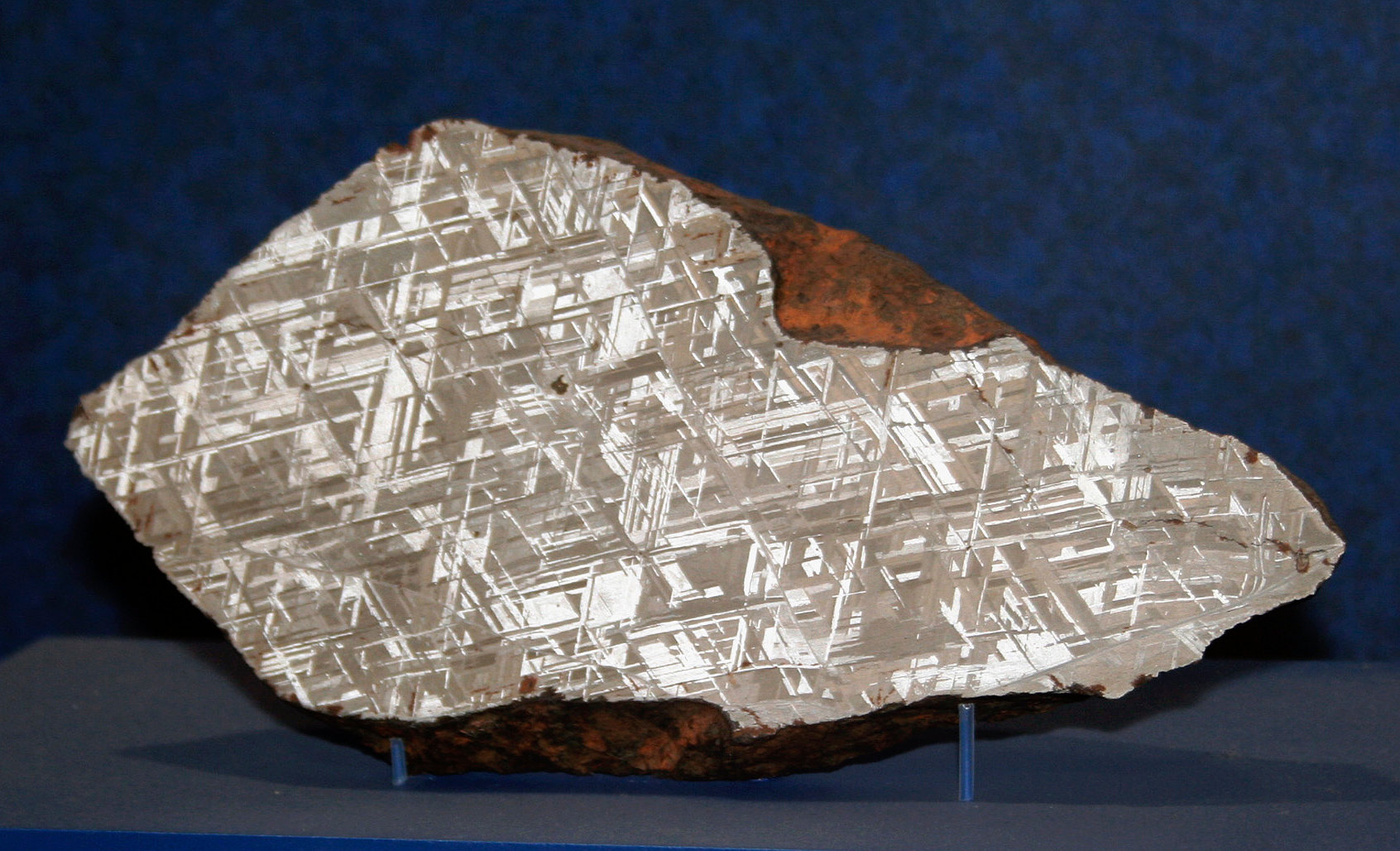 I understand these patterns form when the molten nickel-iron core of its host body cools. As with normal crystal formation, slower cooling rates lead to longer crystal-formation times, which leads to larger crystals.

Beyond that, what factors influence the formation of the crystal, and in what ways?

I imagine composition and cooling time are the dominant factors....

It’s been a while since I studied this, and meteorites are very much not my field, so I’ll share my current understanding but would welcome corrections from those more informed :-)

Whether taenite or kamacite is more stable depends both on the temperature and the amount of nickel present. At high temperatures, when the meteorite is young, it will be all taenite. However, as it cools, we eventually reach a temperature where, energetically speaking, the universe would like a mix of both taenite and kamacite.

However, just because it’s now energetically favorable for kamacite to form, there still needs to be a mechanism by which some of the taenite crystal can transform into kamacite.

The Widmanstätten patterns only form at very low undercoolings, in other words when the temperature is only just in this range where kamacite is starting to become stable.

What you’re actually seeing in this pattern are the plates of kamacite that have formed. The exact pattern you see will depend which slice of the meteorite you decide to polish, and is related to the underlying symmetry of the crystal structure.

The reason you don’t see these patterns be so large on earth is for two reasons: one is simply that the grain sizes themselves are much smaller, and so the size of the microstructure is limited by that. The other reason is that the cooling rate is much faster, so the patterns can’t grow as large.

When these plates nucleate, the extent (length/width) of the Widmanstätten plates can grow rapidly, but they will only get thicker at a rate that's limited by the diffusion of nickel atoms between the iron atoms. This is because the sides of the plates have a coherent interface with the parent taenite phase and diffusion is slower, whereas the tips/edges of the plate have an incoherent interface where diffusion is much more rapid.

I believe the rate of the plate growing longer is related to the degree of undercooling, so at very slow cooling rates like those in space, the plates grow longer much more slowly. This then gives time for atoms diffuse on the plate sides for the plate to grow thicker. And therefore, eventually, we have this beautiful microstructure large enough to see with the human eye.

That’s my understanding, however I think there isn’t yet consensus on exactly how Widmanstätten patterns form, the role that diffusion plays, and also the role of other additions in mediating this (e.g. the presence of phosphorous in the case of iron-nickel meteorites).

I hope this helps!

5
Do meteorites streak across the sky in the same direction?
8
What are the most valuable meteorites and asteroids in terms of precious metals?
1
Are the "extinct species" of meteorites originally from the "Barbarian" asteroids?
22
What is the name of meteoroids which hit Moon, Mars, or pretty much anything that isn’t the Earth?
1
What could be the name of a huge asteroid I watched some years ago?
4
Is it possible to find what crater the Mars meteorites come from?
0
Could the James Webb Space Telescope be protected from meteorites?
1
Does magnetosphere have an influence on where meteorites would impact on Earth?